Sinead O'Connor brought theology to Massey Hall Saturday night. Theology, the title of her latest double-CD, is a return to her own songs and sound following 2005's Throw Down Your Arms, a CD of reggae covers. Her previous album, which brought her to the Kool Haus last June with rhythm duo Sly and Robbie, was well received. But her fans also craved her hits. Saturday's show did not disappoint.

O'Connor took the stage in an androgynous dark suit, launching into Emperor's New Clothes and Stretched On Your Grave before making much banter or eye contact with the audience. But her voice more than made up for the lack of movement on stage. Hearing her sing Nothing Compares To You live for the first time sent shivers down my spine. And I don't mean like the Britney spoof.

One particularly vocal fan kept shouting out for the gorgeous song (and video) Troy. By the encore, O'Connor acknowledged her by retorting "I spent so much money on therapy, recovering from the need to sing Troy." She prefaced her first of a three-song encore telling us "Most radio stations these days would rather I didn't play this song" before launching into Black Boys On Mopeds.

Its lyrics are still very much resonant in today's world: "These are dangerous days. To say what you feel is to dig your own grave." O'Connor got into a bit of trouble for doing just that almost exactly 15 years ago when she ripped up a photo of Pope John Paul II on Saturday Night Live to protest child abuse within the Catholic church.

Continue reading for more on religion and blasphemy in the house of Massey....

Only a handful of new songs were thrown in to the 120-minute show. Theology draws on Bible scripture for inspiration, but includes I Don't Know How To Love from the Andrew Lloyd Webber/Tim Rice musical Jesus Christ Superstar. One fan held up a placard that read "PSALM 91 something beautiful." How apropos.

One of the highlinghts of the night came when the stage lights dimmed, save for a few spotlights. The lovely In This Heart, got a true a capella treatment, with two female and one male voice from her five-piece band joining her in tight harmony.

O'Connor closed the show with the song Back Where You Belong, which will appear in the the film The Water Horse, coming out this fall. 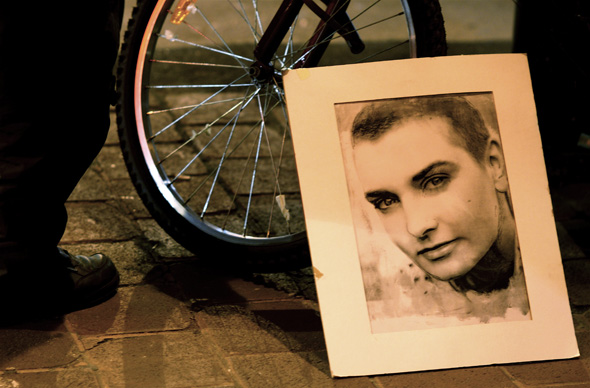 There was a paucity of merchandise for sale at the show. A shame, considering how eager Toronto audiences are to eat up that stuff. Outside on Shuter Street after the show, some of her adoring fans were tempted to shell out for a keepsake. An elderly Asian pulled up front on his bicycle and pulled out a stack of sketchy prints of O'Connor that he was trying to sell for $15 a pop.

I caught up with some fans outside the stage door, hoping to get a glimpse of the singer up close after the show. Heather Mazhar said she saw O'Connor 10 years ago at an equally memorable show. "It was the day after Princess Diana died."

How has the singer changed in this time? "She just gets better with age, man," replied Mazhar. "She's just wiser."