Virgin Forgoes the Cherry and gets its Pumpkin Smashed Instead

Why hang out with some chick named Tiff when you can romp around with 30,000+ virgins? I just don't understand some people...

The second day of the Virgin Music Festival saw Toronto get visited by big shots The Killers and Smashing Pumpkins, while also getting some love from local favs Metric. With a large crowd showing up even earlier than the Saturday show, expectations were riding high. For the most part, the bands at the main stage delivered.

The real fun suckers were the thousands of people packed in tight at the main stage. I never thought I'd hear myself say this after moving to Toronto two years ago; I really, really missed being in Montreal because of you people.

--
I'll save that rant for later, though.

Kevin didn't really care much for Tokyo Police Club, but don't let his grumpiness bring on the frowns. I thought they were alright. What they had going against them were the last three monster acts coming on after Stars. TPC definitely ain't on my list of "must see" acts, particularly for a $125 ticket, but they were in good form and were very much alive on stage, unlike a certain other police agency.

After Metric finished playing some new material the roadies came onto the stage in full force to set up the relatively elaborate (for a festival show) stage dressings for Brandon "My Cock is spelled with a capital 'C'" Flowers and The Killers. I'd show you how pretty it was, but media wasn't allowed to take any photographs of the stage for the duration of their set. See Figure B below for more information. 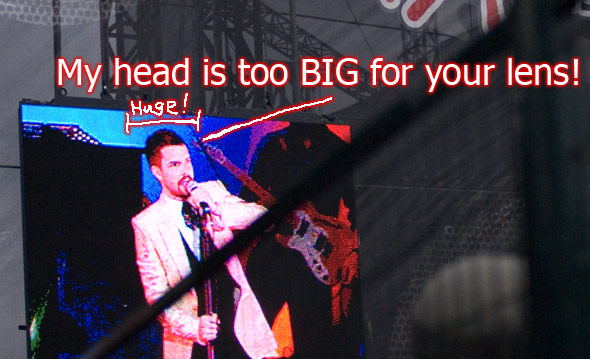 As much as I really would like to wax on about how holier than thou The Killers may or may not be, it's hard to deny that they put on a tight show. I didn't have any real expectations, never having seen them live, but there wasn't a moment when every member of the band wasn't dead on in their roles as full on arena rockers. Brandon Flowers was a great showman, making full use of the stage and playing the keys like the pro he needs to be.

All that and more, despite the hideous facial hair. Looks kinda like a 15 year old who refuses to use a razor because he's so enamored with the fact that, HOLY SHIT! He's got some facial hair!

Nonetheless The Killers plowed through all their hits as well as a number of new tracks from Sam's Town, their latest album. Interpol take note, there are ways to engage a crowd aside from the obvious "What up To-Ron-To!" though even that would've sufficed on Saturday.

Still, it would've been nice if Flowers had the courtesy to say "Thank you" to the 30,000 people who paid a hefty price; he walked off the stage after singing the last word in the closer, leaving the band to finish things off and wave to the crowd in thanks. Didn't seem like many people cared, though, they damn well should.

Big cahunas Smashing Pumpkins were due next. Bands like Tool have seen their fans rabidness skyrocket due to long lapses in touring, but it's a bit harder to quantify the thirst many people must have had for another Pumpkins show after the band called it quits after their fourth studio release (b-side collections and box sets notwithstanding). 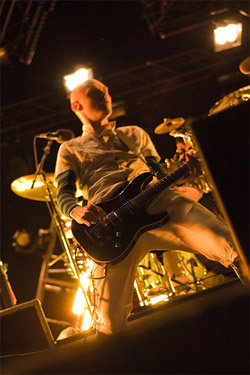 Colour me saddened that we didn't get Everlasting Gaze as the opening tune, which was what Montreal got during the Summersault tour in 2000. New material works just as well though, and mixing right into Bullet with Butterfly Wings as early as the third song would seem to set up the night for the cock-rock fest to end all cock-rock fests.

Didn't really happen, though. The Pumpkins played a number of their big hits, mostly from the Mellon-Collie days, a notable standout being a Corgan-soloed acoustic version of 1979. I never cared for the song, but standing on stage alone with just a guitar and not even a drum machine ended up being awesome fan service all around.

And now, the rant about the festival goers. My views are my own and are not representative of the writers, photographers and editors of blogTO. Here on in I'll be referring to anyone in the main stage area as "you". If you weren't there, then this doesn't apply to you. Those last two "yous" don't count, btw.

How on earth can anyone justify spending at least $80+ (for a one day pass) to see huge rockers like Metric, The Killers, and Smashing Pumpkins, spending some much needed time working their way into the main crowd area in front of the stage, only to stand there listlessly while the Pumpkins hammer out Tarantula? All around me were people standing still, staring at the two big screens, I'm assuming hoping to see the camera focus on them so they could show everyone how much more awesome their hands could mimic the devil's horns than anyone else. You people bored the living crap out of the bands all weekend long, with the only crowd worth a damn being the one that turned up for M.I.A.

Think about it, $80-$125, and all you guys did was stand there, smelling of horrendous B.O. which is only excusable when you've been fucking moshing all day long. Every single concert I've ever been to in Montreal, right down to the unremarkable Tripping Daisy (anyone remember "I Gotta Girl"?) had an awesome crowd that danced, pogo hopped, and just plain enjoyed the show because they paid some hard earned cash to do something other than listen to what they could easily get on their home stereo. Sure, my idea of a good time is not necessarily your idea of a good time, but if you're not going to move a muscle then stay in the back; you're standing in the way of a good rock show.

About the only thing Toronto crowds have been good have been some light dancing in small clubs like Rivoli and the Horseshoe, and even then the bands have to fricking 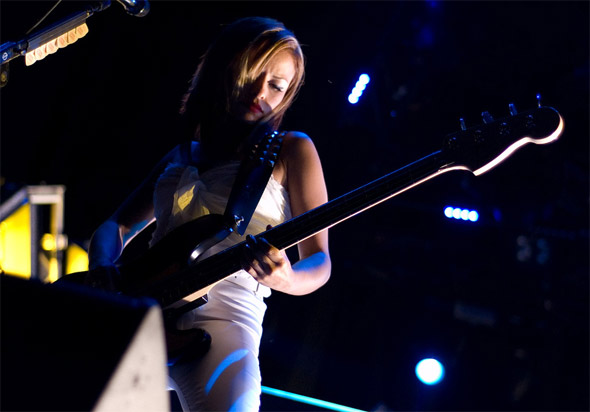 plead for you guys to get off your asses and move around before they slit their wrists out of sadness.

It took a LOT of searching, but in the middle of Zero I managed to find 4 other people who were jumping up and down, headbanging, and screaming their lungs out. Around us were a bunch of jaded couples holding hands and looking at us like we were jumping on newborn kittens. To those people I say "fuck you, you make bands not wanna play concerts. You also also make baby Jesus cry," if you believe in that sort of thing.

Generally, there was a great lineup at this year's Virgin Festival, even if it kinda seemed mashed together and not make much sense at times. Kudos to M.I.A. for getting people moving, for once, and shame on us, the city that somehow manages to be the main tour stop in Canada for bands, for not showing them the appreciation we all claim to have.