I spent the afternoon over at the 2nd-teir stage, affectionately called the Future Shop Stage. The lineup was peppered with lesser-known acts that spanned a spread of genres. Bands featured on the FS stage could probably fill a moderately-sized venue without a problem, but the audience failed to materialize except for the acts that had enough local buzz. 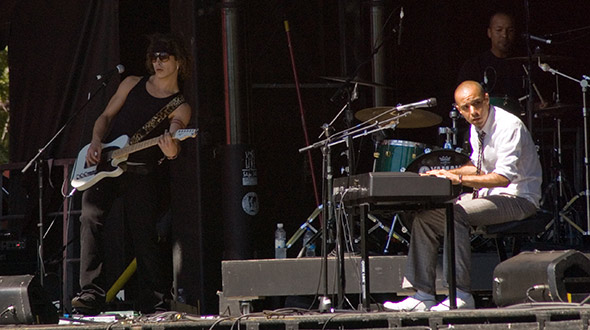 Jon Levine Band (1:20)
The gates opened late for ticket-holders (I had arrived earlier for the media tour), but bands still began at their scheduled times. As a result, the Jon Levine Band kicked off day 1 to a sparse audience of a dozen or so. It was a shame, because Jon Levine has talent. The band's sound is upbeat and keyboard-centric. I'm not talking about synth here--just the straight-up piano sound reminiscent of Ben Folds or Elton John's Benny and the Jets. The Jon Levine Band's songs are inoffensively pleasant (except for a questionable En Vogue cover), and they confidently explore a wide dynamic and tempo range. I can't put a finger on what really sets them apart, however. They just play their brand of music well. Later, I found out that Jon Levine was the vocalist/keyboardist of the Philosopher Kings, and has even won a Juno before. Apparently that's not enough to garner a crowd so early in the day. 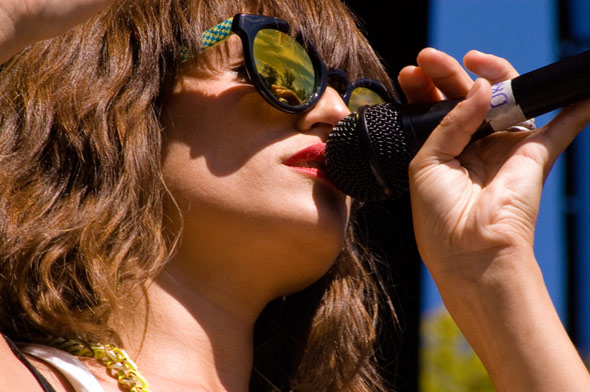 Dragonette (2:10)
Dragonette is a band that looks extremely trendy and plays trendy electro-pop music. This is what I'd call a winning combination for short-term success in the music world. The pre-show buzz was definitely working, as more and more people showed up to the stage in the minutes leading up to their set.

Lead singer Martina Sorbara, decked out in full American-Apparel-Chic, immediately hooked the crowd with her stage presence. Their music consists of steady drum-machine-like beats from the bass drum, female lead vocals that float over the music, and infectious pop arrangements. Their live act was diminished by the fact that the 'electro' portion of their music was plainly lacking. Samples were played through the soundboard, but they were very hard to hear. In contrast, their recent debut release (titled Galore) benefits from the studio work as the samples/synth come through cleanly. They played tracks from Galore including: "Black Limousine", "Jesus Doesn't Love Me", and a crowd-pleasing rendition of "Take it Like a Man".

Ultimately I think their sound is more suited to a dark, moody venue like the Mod Club (which they claimed to be playing this Friday, though I can't confirm this) than an open-air stage on a sunny afternoon. I can't fault them for trying, however, and what they lacked in the sound department they certainly made up with showmanship. Martina's rapport with the crowd between songs was entertaining. At one point, she asked the crowd if the lipstick was smeared over her face yet, and demonstrated that the 'cock-sucking effect' caused by the mic against her lips was the culprit. This, coming from the daughter of Ontario Finance Minister Greg Sorbara, was worth at least a few chuckles. I can't help but wonder if indirectly, my PST contributions have contributed to her success. 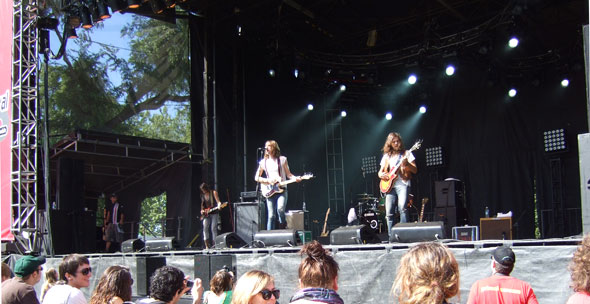 The Wildbirds (3:00)
After Dragonette finished, the crowd thinned out to a mere handful of people. The Wildbirds took the stage, apparently after traveling in a time machine from 1970s Wisconsin (that's really where they're from... Wisconsin, not the 1970s). Now, don't get me wrong, I'm not mocking them. They were accoutered with suspenders, leather vests, v-neck shirts, tight pants, and plenty of facial hair. Just one look at these fellas and I knew that we were in for some classic rock reminisces. The band is a standard 4-piece with 2 guitars, bass, and drums. The rhythm guitarist, Nicholas Stuart also doubles as the vocalist. Even though I'm a huge fan of classic rock, I could not nail down their sound to a specific influence. They play loud and fast, with energy that could really get a crowd going--if there was a crowd at all to watch. Their set consisted of songs from their debut album, Golden Daze. Songs like "Shake Shake" and "Slow Down" (the best song of their set) were memorable. There were rock-anthem-esque moments and quiet moments, but mostly just good old-fashioned rock 'n' roll. Their sound was by far the most suitable for an outdoor venue, but like the Jon Levine band earlier their music was largely ignored by Virgin Fest goers.

The Most Serene Republic (3:50)
Local indie rock darlings, The Most Serene Republic, drew a sizeable crowd against the much-hyped MIA set over at the main stage. This 7-piece band immediately put up a wall of sound, but careful levelling parsed the melody well. I have listened to their albums and enjoyed them very much, but I couldn't pick out any songs other than the last two: Underwater Cinematographer's "Content was Always My Favourite Colour" and their upcoming Population's "Present of Future End"--both were excellent songs that had the crowd bouncing along. I had a lot of fun watching their set. They have a lot more punch in a live setting than their ambient and sophisticated studio mix. Their smooth drum and guitar work plays off the disembodied vocals (up to four vox at once) that seem to float over the music on a completely different level. Seeing them all in one spot, it became very apparent how crafty their vocal work is, as the different melodies met and parted in an orchestrated vocal dance.