Hearty Soup for the Soul at Harvest Festival 2007

In this festival review, we present the relections of both a first-time attendee and a veteran Harvest Festival goer.

The newcomer's perspective (review and more photos by Jerrold Litwinenko):

Having never had the desire to go take on the crowds or suck up the cash gouge of WEMF, and having many times enjoyed the outdoor and community-driven nature of OM festivals, I figured that this year I'd finally have a new festival experience. Being no stranger to the "scene" (whatever that may have meant in 1997 when I went to Phryl parties or what it may mean today) and feeling the threat of oncoming S.A.D., I decided to drive 3h north of the city to spend my fall equinox with neo-pagan soup-drinking revelers at Harvest Festival 2007.

From start to finish, the event was amazing. 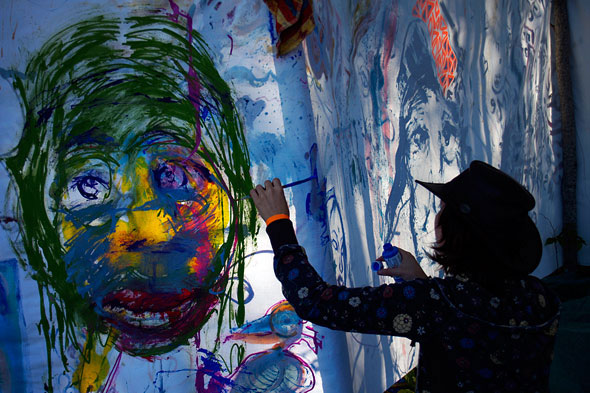 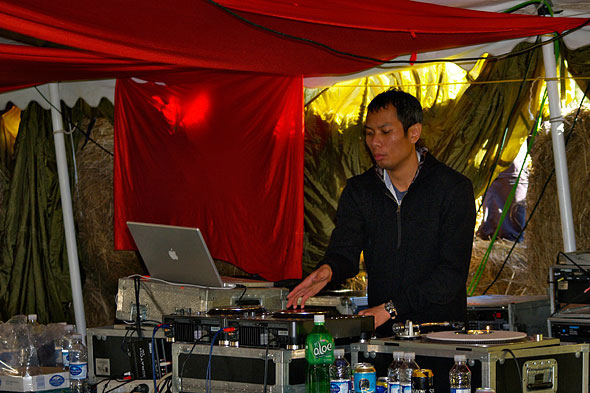 Smiling volunteers (and an emu) greeted me near the entrance of the vast property (complete with a castle-like farmhouse), and quickly and efficiently showed me to my off-road parking space on the field. The short trek to the camping area was pleasantly interrupted by an odd array of erected sculptures resembling howling faces. Once arriving at the camping area, which was nestled along side a pond and in view of another spattering of intriguing sculptures, I set up my humble tent home knowing full well that I'd probably only be using it for a few hours in the morning.

A quick tour of the grounds while the sun was still shining bright and the sky blue revealed last-minute preparations by the festival crew. DJs were checking cables and tweaking amps, artists were hanging canvasses, and the massive firewood teepee was ready to go.
As darkness fell, the real fun began when the Lunacy Cabaret by Zero Gravity Circus took to the stage. Characterized by just enough kinky and humorous perversion (and an ample dose of nitrous for a couple of audience members) the circus got the crowd into party mode. 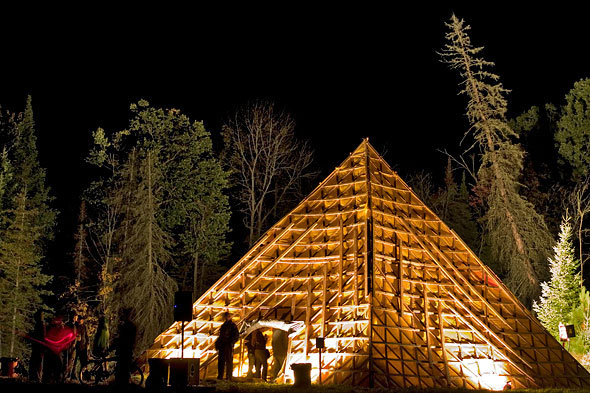 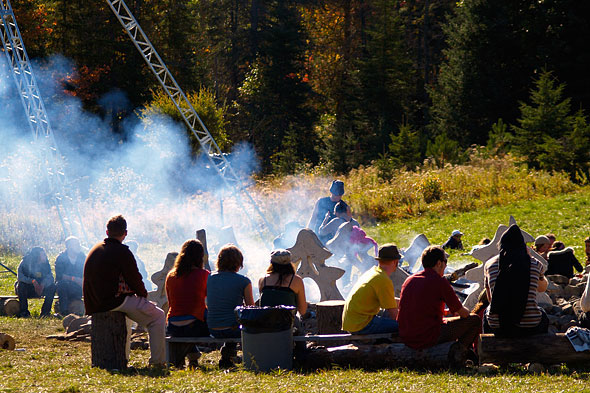 I spent most of my evening in the Dragon Heart System (aka the techno tent), where the music was keeping the crowd in a mild frenzy all night long. The party vibe was tight, and everyone was all smiles. My few side trips to the Pyramid System (aka the downtempo and worldbeat room) were short-lived because I wasn't quite ready to shift into chill mode and didn't want to miss out on the fun that was happening in the techno tent. I only made one brief stop at the Web System (aka the psychedelic trance and progressive tent) because it's not my thing at all. Luckily I was treated to some delicious, warm harvest soup on my way back to my preferred tent.

By 4am I was nearing crash, and by 5am I was shivering myself to sleep in my tent. Waking up in the morning after just a few hours of toss-and-turn sleep (which was interrupted once by a flurry of loud activity by the gaggle of geese) was pleasant. The sun was shining, and the partiers re-emerging (and some undoubtedly still going strong without having rested). Basking in the sun for a few hours before packing up and heading home was a real pleasure. Sharing the first morning of autumn with friends, in the fresh air on what was a gorgeous day, was blissful.

A veteran's perspective (review and more photos by Mike Rotenberg):

I haven't been to every Harvest Festival, in fact this year was only my third time attending. I was at last year's event at the Wholearth Farmstudio near Hastings Ontario, and what seems like an old school Harvest Festival now going back about 5 years. 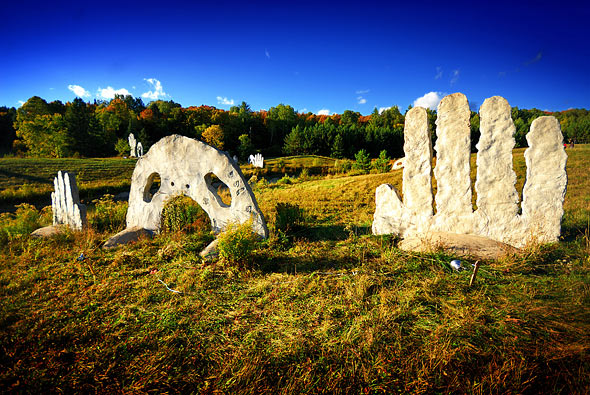 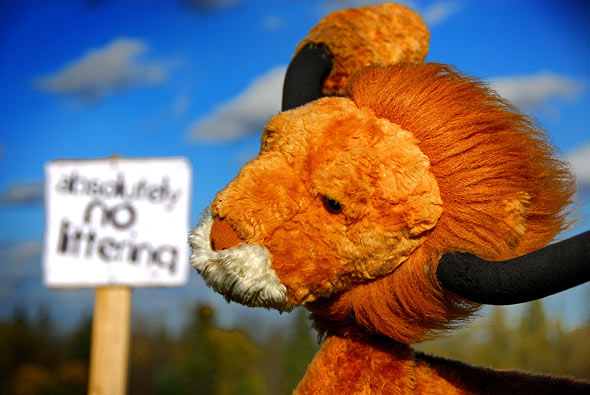 One thing is for sure, the vibe of this festival has held strong over the years. The people in attendance are just as enthusiastic as ever, and fortunately there hasn't been a rush of jocks and sluts like too many other festivals.

The addition of the Zero Gravity Circus last year definitely brought a new element of entertainment to the festival. I loved the way it brought everyone together to relax before the party really got going. That being said, the performances were a bit more impressive last year. The off colour humour of this year, combined with an uninspired use of drug references, left something to be desired.

The last major comparison point is the most obvious difference to this year's festival, the venue. The freaky Midlothian Ridge art farm was well worth getting up to the festival early for. Festival goers spent the late afternoon wandering, mingling, and getting comfortable with their
environment. Although there have been better barns in previous years, I'm stilling giving this year the award for best venue ever! 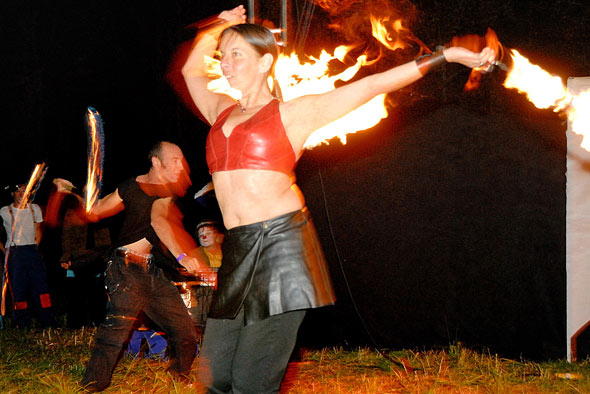 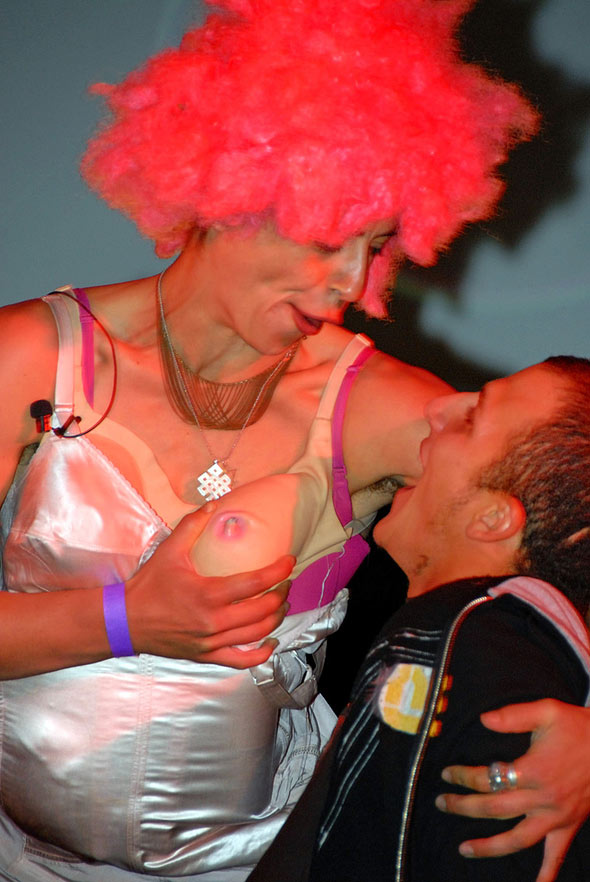 And all-in-all, this was one of the best Harvest Festivals to date. The organizers clearly have the formula for the festival nailed down. If you're a member of the Harvest Festival massive, we want to hear from you! Which was your favourite Harvest Festival? How did this year's festival stack up? 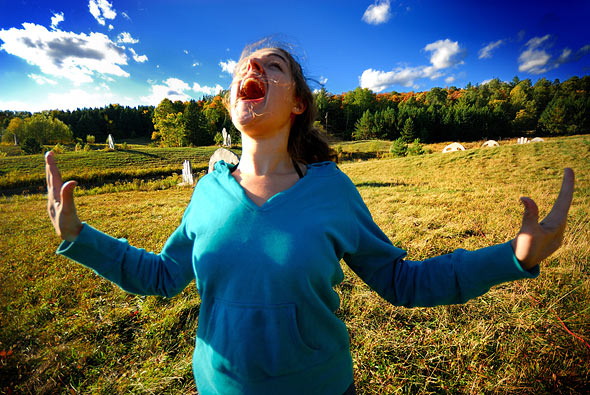