De-Virginized by Bjork and M.I.A.

For the most part, Dick Branson knows how to throw a damn party.

Step 1: Invite 40,000 of your closest friends
Step 2: Bring booze
Step 3: Schedule every big name you can find for your main stage, even if it feels like jamming a square box into a triangular hole.

Hard to go wrong, really, but a few things just didn't seem right at the main stage over the course of Saturday's Virgin Festival. Recap, shots, and my personal recommendations for tomorrow's sets (because my word is the gospel) after the jump. 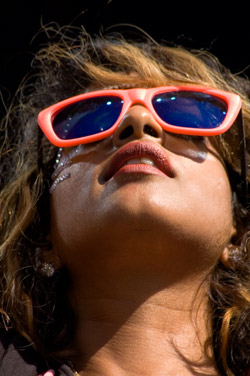 As I'm pretty sure Kevin will attest to, most of the action was happening at the main stage, with relatively little audience action going on at the enormous Future Shop stage, let alone the two smaller venues. It probably had something to do with M.I.A. (hereafter known as MIA because my period key is acting up) bangin' her set in the middle of the day.

Long since having decided to never go back to school again, I'm sad to say I missed out on MIA's free Ryerson show. Or I was until about 3:55 pm on Saturday. MIA came out to a deafening crowd, leading off with the opening track to her new album, shoutin' "MIA is comin' back with powah powah!" At a live show the last thing I wanna hear is "it's all about the music, man!"

It's all about the performance. If you want the music, save yourself $125 and just listen to the Virgin Fest acts at home. Then again, the kind of crowd servicing performance MIA put on is what people shell out their would-be beer money for. A solid flow of consistently bitchin' music was had that spanned both of MIA's albums. It's a treat to hear the bass line to Blue Monday get re-branded as well as MIA's done it with "20 Dollar", but the climax of her set was when she demanded that several hundred people rush the stage and dance with her.

Virgin Festival security, thank you for not fecking that up for the audience. It was damn wild.

Following MIA was a surprise show by scratcher extraordinaire Kid Koala. He wasn't announced as a performer until this morning at a media briefing, though I'm sure someone out there heard from a friend's friend who carries his records that he'd be playing.

He calls Montreal his home town so I'm heavily biased when I say it was all-sucky that the weather didn't play out in his favour. "But it was a beautiful sunny day, Ryan C!" That was the problem; his records were coning because of the heat. He had to cut the set short after 20 minutes because his music collection was turning into pudding.

But not before we got a sweet sampling of those two old geezers from the Muppets having an argument/agreement. 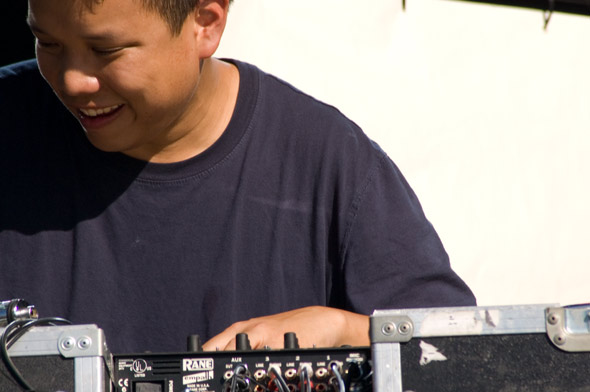 And then things got dull.

The Arctic Monkeys. Judging by the few thousand people screaming along to the tunes, I'm guessing I might go against a few grains in saying that it was a boring set. Their music was solid, and their talent was obviously there. But after seeing Dragonette, MIA and Kid Koala I guess I was a little spoiled when it came to artistic showmanship. The Arctic Monkeys, who sounded like a rockier version of the Klaxons with a different accents, played a solid set without saying so much as a "hello" to the audience. Not as bad as Maynard from Tool singing with his back to the crowd, but pretty "meh" considering the price people paid to get in.

Now, why did I have it in my head that Interpol was this awesome electronica rock outfit with a heavy dose of Daft Punk thrown in for good measure? Did another band with a similar name exist 6 years ago? 'Cause if I thought The Arctic Monkeys were dull, Interpol put me to sleep.

A good rule for bands would be to not open with their most slowly paced song on the album, unless it's really short and you jump ass-first into a sick piece of psychobilly right after. I spent the first five minutes trying to keep my eyes open, and when they were open all I saw was Interpol's non-singing guitarist simulating sex with the back of his guitar. That tune wasn't what I'd call mood music, but to each their own, I guess.

To their credit, Interpol got a little more interesting in their last couple of songs, but, DAMN, they were playing 2 minute long guitar "solos" that consisted of them hitting the same damn chord over and over at moderately varying intensities while the guy standing next to me did his best to follow along with his air guitar. Newsflash: that over-zealous solo looked effortless because a hamster with one hand lost in an exercise-wheel accident could play it with his eyes closed.

Moving on before Interpol sends out an MI-5 unit on my ass or something...

Bjork is a fecking nutbar. She's the most awesome fecking nutbar on the planet, but she is insane. It's true. Watch Dancer in the Dark and tell me different.

I don't really know any of the Sugary Cubary singer's music aside from the mainstream hits. It didn't really matter, though, as she proved she's earned the right to sell out stadiums and festivals. Following The Monkeys and the British Police Agency's act wasn't hard to do, but the explosions of confetti, canned string (right in my face too, thonks Bjorky! Seriously!), and, well, 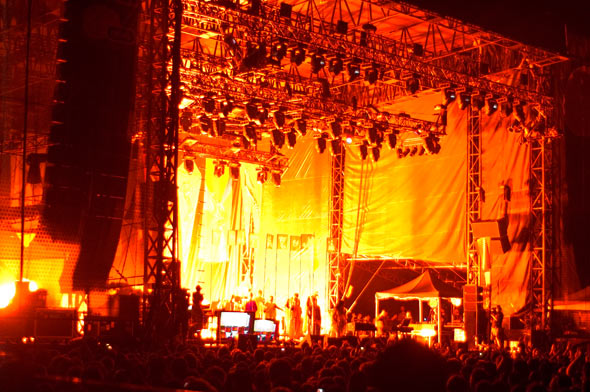 actual explosions were all truly appreciated. I'm sure fans would be able to name every word of every song she played (and she played a great many!), but I was content with head banging, grooving, being saddened by and then confused by the incredible stage show, complete with funkily dressed orchestra.

Any orchestra dressed as bizarrely as that, that also like to head bang when their front woman brings out the big guns in Army of Me is truly deserving of some serious praise.

After, though, everything went into some weird electro-acoustic territory; the kind that I hate. It's the kind of music that only a fan could really enjoy (or a newfound fan, for all you people who're thinking "But I really liked it!"). Dissonance and discordant isn't something my brain can handle after almost 10 hours of Virgin megawatt speaker systems.

All in all, it was a bizarre lineup. You have the dirty grime of MIA, followed by a dj with a mastery of whimsy, then two cruddy rock acts that were seriously lacking in the rock department, and close it off with possibly the most bizarre performer touring to sold-out shows today. Fortunately, tomorrow's main stage set looks way more focussed. Regarding my recommendations, I'm thinking you should stay at the Main Virgin Stage all day long. You got the dirty sex-obsessed rock of Louis XIV, and not long after you get a run of Metric, The Killers and The FUCKING Smashing Pumpkins! Maybe go check out Blonde Redhead, or stick around for the much hyped-up Tokyo Police Club and Stars. Doesn't matter to me. Just stop pissing on the god damn porto-potty floors, you freaks.

And $50 says The Killers are bloody pissed that they're the opening act for someone.