Cat Power Hides in the Shadows of the Phoenix

To see a Cat Power concert is to witness a catharsis. Cat Power, a.k.a. Chan Marshall, lives and breathes her life on stage through her bluesy numbers.

You can tell she's lived through a few tough times. So much so that she retreats into the shadows of the stage out of the bright lights, as she did for much of the show last night at The Phoenix Concert Theatre.

The onslaught of snap-happy fans with their point-and-shoots, constantly blinding her with bursts of flash every few seconds, probably didn't help much. For a lead singer, Marshall sure doesn't seem to enjoy the spotlight.

Backed by the formidable Dirty Delta Blues Band, she worked through over an hour of mostly slow and sultry personal tales from her latest recording, The Greatest.

I've got mixed feelings about all-ages shows like this. I like that those too young to drink can still attend great concerts. But having barricades separating the bar area from the stage area doesn't seem to work for anyone. There's got to be a better way, don't you think? 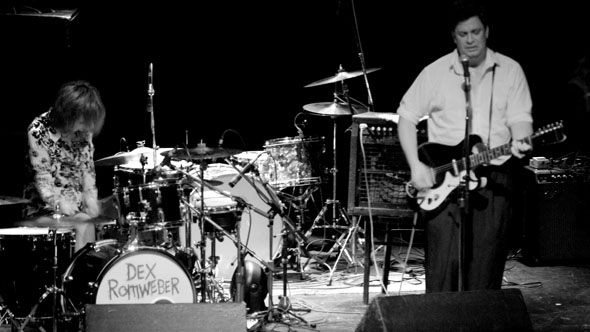 Opening band Dex Romweber Duo tried to loosen the crowd a little with their two-piece guitar-and-drums blues. But they had to coerce some of the younger crowd at first. A few songs into their set Romweber asked if they were boring us, which finally gave an encouraging response from the audience.

Marshall livened things up a bit about an hour into her set, putting her own twist on The Rolling Stones' (I Can't Get No) Satisfaction. A few songs later, Cat Power left the stage with lots of heart-felt thank-yous, leaving the crowd begging for more.

But there was no encore. Cat Power had up and gone.