Since Jeffree Star's now infamous incident of violence at his Pride set on Saturday June 23, a lot has been happening behind the scenes. At first Star celebrated the fact that he stood up to the haters and bragged about it on his MySpace blog, copying the original article in its entirety and then adding a paragraph of his own where he says "I don't give a fuck who has a vagina or a dick.. NO ONE fucks with me, end of story".

On Sunday I updated the original story with new information gleaned from sources involved with Pride Toronto. What I heard was that Star freely admitted, out loud and within earshot of a Pride Toronto worker, that he knowingly hit a girl who wasn't throwing anything at him but had merely given him the finger. Several hours later Star's blog entry was removed without an explanation.

Regardless of whether or not Star hit someone who threw something at him or if it was someone who merely gave him the finger, him and his handlers found themselves stuck in the middle of a public relations nightmare. With the blog entry and bragging gone, along with the fact that he'd been telling his friends that he never hit and never would hit anyone according to another source, I smelled a cover-up. Especially since I was behind the barricade at the time and heard Star say "I popped that bitch in the face!" when he was on his way back to his tent. No mention was made of which "bitch" he was referring to at the time.

It turns out that Star may have actually hit a girl who not only didn't throw anything at him or give him the finger; a 17 year old girl has told me she went to Star's show as a fan, danced along to "Plastic Surgery Slumber Party," and left after Star's fist connected with her face.

--
I sit down with Amanda and Chris (not their real names) at a local coffee shop. I'd heard that Amanda was the first person Star attacked when he leapt into the crowd through Chris, a close friend of Amanda. She's a 17 year old student and an aspiring designer who was familiar with Star's image and music, cultivated over the last year and a a half on MySpace. She was one of his many thousands of friends on the site, as was Chris, before Star blocked them both a few days ago.

Amanda claims that she never once threw anything at Star. She was next to the people in the crowd who were throwing the crap, however, and she also says she knows who they are.

"They're acquaintances... not from school. We've run into each other at other people's parties, that sort of thing. They're not my friends, I just know who they are is all." Amanda referred to at least two girls, one of which was flipping Star the bird, and another who was throwing stuff at the stage with a male friend.

Asking her how Star's fist ended up on her face, I get a very frank and to the point story.

"We were dancing and we'd noticed the people next to us throwing some random crap on the stage. Near the end of [Star's] set, or when he cut it short, whichever, one of the girls threw a plastic cup of beer and the whole thing drenched his leotard... one piece... that pink thing he was wearing."

At that point Amanda says one of the backup dancers, a real (non-MySpace) friend of Chris, jumped into the audience and met one of the girls face to face, and started screaming violently at her. Amanda's quick to tell me that the dancer did not once touch the girl, he just did a lot of yelling. 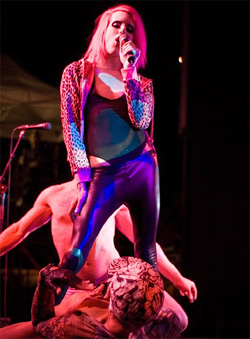 "I saw Jeffree climbing over the fence soon after. I didn't move out of the way or anything because I hadn't done anything; I was waiting to see what was about to happen. I was still right next to [the dancer and the girl he was yelling at] when Star grabbed my hair with his right hand, and punched me with his left. After that he moved onto the girl [the dancer] was with and shoved her around."

When Star was later signing autographs, Amanda approached the table and asked "Why the fuck did you hit me... I didn't throw any shit at you", at which point Chris' backup dancer friend told her to "Fuck off or you're gonna get hurt!" In the days since the incident, Amanda stresses that the backup dancer has apologized to her and Chris numerous times about everything.

Amanda tells me that shortly after she was punched, she sought out a security guard for help. "He told me to get lost and find a cop. So I found one on the streets and he told me that because Star wasn't from Canada and that it was such a minor incident that there was nothing [the police] could do."

A 21 year old male from outside the country is alleged to have hit a 17 year old minor in the face, and the police say there's nothing they can do? Colour me uncertain, but I'm pretty sure that Jeffree Star doesn't have diplomatic immunity. If I were to pop my wife in the mouth and she called the cops, I'd have some definite explaining to do. Something tells me they wouldn't take me out for a beer.

Amanda had said that a major condition to her meeting with me would be that her name and Chris' not be published. I ask her what she's looking to get from all of this, and I'm particularly curious as if her name isn't to be published, she's obviously not seeking any fame.

"I'm so tired of people harassing me, sending me threatening messages... people walked up to my face and told me they were going to hurt me because Star had been banned from performing at the Alterna-Queer stage the next day, and that they couldn't see their idol.

"I've spoken with lawyers, and I don't think I even want to press charges. All I want is for Jeffree Star to put a new entry on his blog, saying that what he did to his fans was stupid and that he doesn't condone violence of any kind. He doesn't even need to apologize to me. He has so many gay and queer kids who need someone to look up to and they look up to him; he needs to tell them that punching people in the face isn't cool. He shouldn't be a role model to anyone if he thinks what he did was 'right'."

I'm reminded of my first, original entry on the whole incident; I definitely came off as pro-violence. In retrospect, this also was stupid of me. Even if Star had hit the people who were throwing stuff at him, hitting them back even if they deserved it doesn't make it right. There were several failings during the show; the dicks throwing stuff on stage and at Star, Star rushing the crowd and hitting people indiscriminately, and the total lack of any action by security to stop the crowd from throwing crap in the first place. All of them played a part in what happened, but Star could just have easily done what most rockers and performers do when met with an irate crowd: walk off the stage. Instead he chose to get involved, and threw punches into a crowd that came out to celebrate Pride. 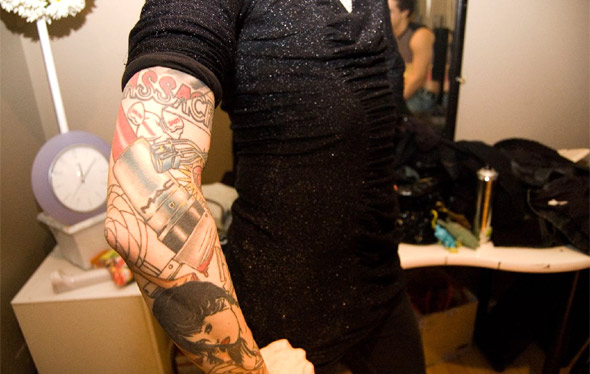 The security guard at the South Stage gate was on a bit of an ego trip throughout the night (whoever was there on the Friday; you're aces). I was let through to take some shots during the Kids on TV set, and the moment my booty started shaking (while taking pics; I can multitask) he rushed over and told me to "Get the hell out, I didn't let you in here to dance!" During Star's set he barred me from entry, even with a press pass and a promise that I would be stiff as a board; I went around through the back instead to get proper access for the shoot. With that said about the piss poor security, I can tell you now that Pride Toronto hired a third party to take care of security; these weren't Pride volunteers and as such it might be a bit much to blame this on the Pride Toronto organization itself. They have a lot to deal with and security is definitely not their specialty, so they hire out. Hopefully another company will be used next year.

Earlier in this entry I made mention of Star removing the blog entry from his MySpace page. Jeffree Star told me during an interview several months ago that he has managed his MySpace site personally from the beginning. Whether that has changed and he now has help from another party, I'm unaware. Either way, go ahead and try to find proof that the entry ever existed, regardless if you saw it. It's just not there, and even after an hour of searching Google's cache I couldn't find it. 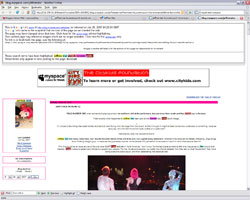 That doesn't mean I didn't find it after another hour of searching. I've placed screen captures of the entry from Google's cache in this Flickr set; there's 6 shots, covering the whole entry. Anticipating that Star is going to deny ever throwing a punch, check the last screen grab where he does indeed brag about "sticking up" for himself and saying that "No one fucks with me". Putting this after copying my original post in its entirety is an admission of action in my books.

The world doesn't need another guy using violence to solve his problems, particularly one who's in the enviable position of being a role model to tens of thousands of kids. Particularly a grown man like Jeffree Star who, allegedly, seems to favor hitting the women who he thinks are throwing the stuff instead of the men.