Homo-Hop Breaks some Barriers, Pops some Cherries at Toronto Pride 2007

Queers and hip hop = oil and water, in no particular order. For the most part, I tend to associate hip hop and rap with a blatant disregard for all around acceptance of sexuality outside of guys and "bitches". I don't tend to listen to much hip hop outside of nerdcore, so the frequent NES references don't tend to upset my pro-everyone stance. But with the likes of Buju Banton and Eminem's frequent anti-gay tirades (regardless of their public denial of being anti-queer; does anyone, seriously, actually believe their bullshit?) it's hard to imagine a hip-hop world that's not only very much pro-gay (and pro-anal guy on guy fisting) that's also pretty god damn good.

Yesterday at Pride Toronto's "Homo-Hop" showcase, this un-believer was, umm, made a believer... for the most part.

--
First things first, are you "into" music? If so, WTF ARE YOU DOING HERE? There's a LOT of shiesse goin' down right now that you'd either be silly (or a homophobe) to note be checkin' out right this very second* 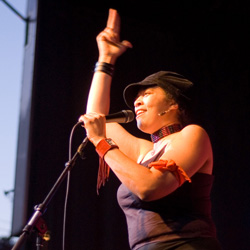 After leaving the area wherein bodacious boys and girls were strutting in their skivvies, I didn't think the night could get any better (could you blame me?). I stroll down to the Pride South Stage expecting an evening of generally interestingness, but nothing more. Belladonna and the Awakening were set to take the stage at any moment.

And they're Torontoites to boot! The outdoor venue was almost completely empty, aside from Zanta who made a guest appearance and did some push-ups. T'is a shame really as this group was pretty damn entertaining. Belladonna, herself, had an infectious attitude regarding her (and the other acts') music. With live band The Awakening backing her, she grooved through a number of tracks that included some jazzy sax work and tam-tams. After her set she told me about the horrid things she was thinking of telling her mohter, as well as things she should've said years ago; her advice is to get your parents divorced as quickly as possible so you can take advantage of dual Christmases as early on as possible. 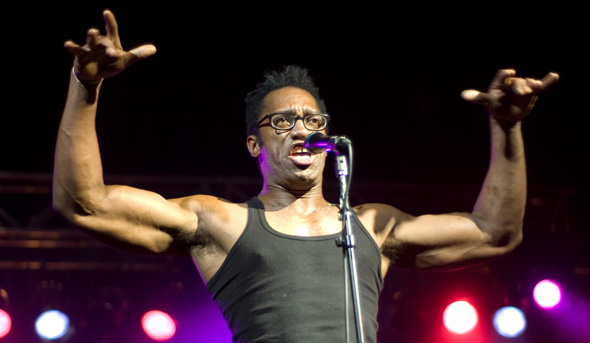 Who the hell played after them? He wasn't on the bill, he's not on Pride's website, and he was pretty damn cool. He did some crazy spoken word rap hip hop nippular thing that I found immensely entertaining. He was alos really, really buff. He was only on stage for 15 minutes or so before he was booted off, though it wasn't because of any (non-existent) booing.

First person to remind me gets a gold feckin' star. On their face.

Shante Paradigm took the stage our mystery man. Sorry Shante, but he was both a tough and odd act to follow. You didn't do anything that was particularly different or engaging, or at least no more so than even I'd already heard. I like your hair, though.

Deep Dickollective was up next, or DDC as they had to be referred to on MTV for various reasons (parents, I'm lookin' at you). These guys were a damn riot! Turns out they're a bit like Wu-Tang in that the touring group changes depending on who's available. The four guys who took the stage last night were in the damn zone. Just when you think there aren't many people at a venue, they all come and crush the 4 people who're standing at the main stage barrier. DDC don't seem to have a myspace page, but they damn well have a wikipedia entry worth perusing. Genuinely nice people, according to their airport driver, they came off as confident and hip-hop savvy, easily getting large crowd of people to "limp-wrist" in beat to one of their last songs. 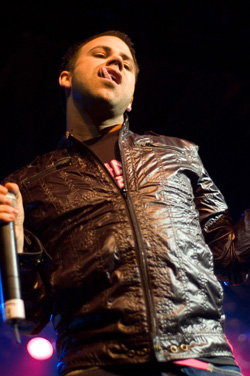 Johnny Dangerous took over after DDC. If you're either a fan of Aqua Teen Hunger Force or MC Chris you might think you've met run into the gay sibling of Sir Loin. Essentially Hardcore gay-porn rap, JD was glad to show us how he works it and gets down.

And when I write cheesy lines like that, it's usually me quoting lines from a band/person.

Johnny was also pretty short. Perhaps he was compensating with his lyrics for his height-stunt, but I couldn't tell; this was some hardcore stuff. Worth the price of admission alone (albeit, this was a free show... I'd pay $10 to see'im).

Cazwell, the main event, ended the set. I was looking forward to seeing the NYC veteran, in particular 'cause he was collaborated on an Avenue D song, and it happened to be Avenue D's only song worth paying any attention to.

Imagine my disappointment when he put on an average show.

Sure, the four girls dressed in what looked like glowing 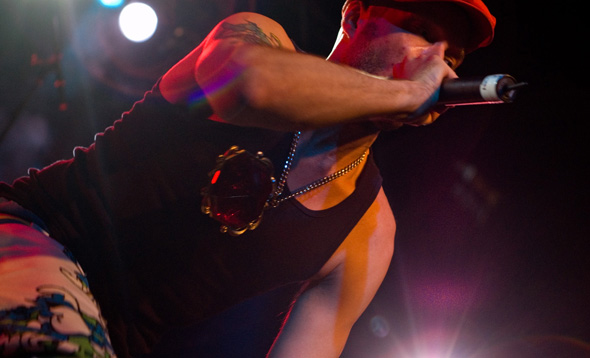 neon loved him (and screamed, about 30 damn times, for Caz to strip naked), but he put on a show befitting of an average rap star who knows he's already somewhere and has resigned himself to being a popular guy. He wasn't bad; far from it, Cazwell has some sick rhymes to spew, but after Deep Dickollective and Johnny Dangerous, I wasn't as ready to accept what passes for nutty in NYC (he was wearing Smurf pajamas, after all) as the gospel of all thing gay and hip-hop combined.

Belladonna, the mystery man, DDC and Johnny Dangerous. Give these people your love, adoration, and cash.

EDIT: It's Deep Dickollective, not Deep Dick Collective. I'll leave the DDC acronym anyways, though. Think of it as a phonetic acronym.