God bless NXNE and that super useful 3 day free-for-all pass they sell ya. You get the opportunity to go and check out some random band on a whim. I may have recommended Creature, but I had no plans on actually checking their set out.

Nope, I had plans to stay at The Bovine all night to check out Modern Boys Modern Girls. But seriously, who hasn't seen MBMG. I mean besides me. I waited in line for 25 minutes at The Rivoli to get in to see some kind of Creature, muttering to myself the whole time about how there's no way in hell standing out there for that long was worth it.

Let it be known that this band stole the whole 3 day fest for anyone who was in attendance. It might be a little premature to say that when day 3 only happens tonight, but ain't nothing gonna beat this for a loooong time.

--
I don't think I missed a song, getting inside at around 12:05. From then until about 12:40 I received a front row assault on the senses. Creature play an intense form of disco-funk that, looking through an immense Winamp playlist, I can't really compare to anyone. It isn't new or anything, but it's pop perfection in a bottle.

And I think the reason why these guys are getting such high praise from me is because everyone one of them was not only a fantastic showman/woman, but they could also play their respective instruments as good as anyone I'd ever seen. 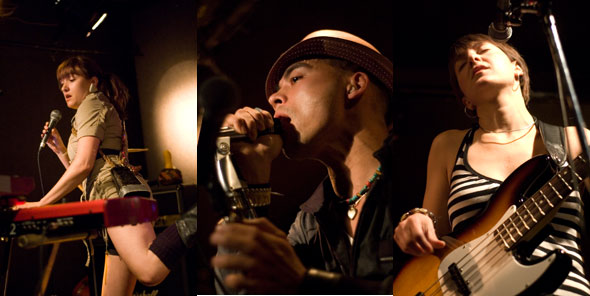 Creature bassist Anastasia was drenched with confidence (and sweat) as she shook her ass throughout the whole set, not once losing her place. Keyboardist Lisa, err, sorry, CowBella Banella was dressed all Client-esque and smacked her various cowbells (natch) with a flair that I didn't know was possible. And Kim, of course, was no slouch either. He's been the only person I've seen successfully get an audience to start dancin' just by suggesting the idea; the NXNE crowds I've seen have largely been very much the Al Gore of the party.

So even though these guys played a shortish set on a tiny ass stage, I'll actually step way out there and say that they put on the greatest performance I've ever seen, and I've seen Buckethead jam with Primus while Brain Mantia threw his drum sticks into the crowd (one of which smacked me on the skull).

For more shots of Creature's set at The Rivoli, check out this Flickr page.