The End of an Era; and a Nice Surprise

This is more than a show review for me. This is me being there for then end of something really special. And I'd like to tell you a little story about it.

When I was 17, I thought (like every 17 year old), I had it all figured out. Me and few friends decided in our infinite wisdom that we would move from Sudbury to Calgary and keep playing music out there. We didn't really know anyone there, just thought it would be a good idea.

Obviously, that didn't happen. The band never came together, and after the money ran dry we had to limp back home with our tails between our legs. But not before something really nice happened: we made friends with an Edmonton band that would go on to put out some of the best and most progressive punk albums ever by Canadian artists.

And on Friday night, alongside former label mates and friends Moneen, Choke played their final show in Toronto at The Mod Club.

But if you look at the above photo, which was taken Friday night, you might notice something important. That's not The Mod Club. Its the Bovine. And that's where this story gets a happy ending.

For more than 13 years, Choke have been recording and touring Canada more or less on their own dime. Putting out some of the fastest, tightest, and catchiest tunes, Choke have garnered a massive following in the country. Their 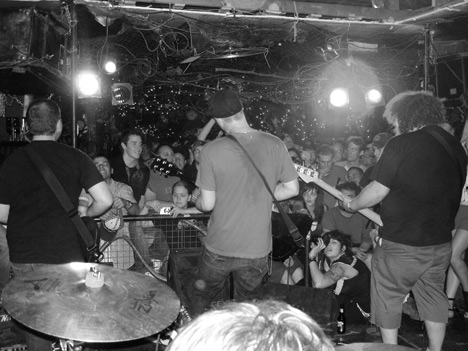 6 full length releases chart a course of progression in musical ability and style like a map. And while they feel their final release Slow Fade: or How I Learned to Question Infinity is their "crowning achievement"; I don't think many would argue that 1999's[Forward] is one of the best punk albums ever released. Worthy of being grouped in with other 90's genre destroying albums like NOFX's Punk in Drublic, or Refused's The Shape of Punk to Come.
When I first met Choke, it was shortly after the release of their 1995 album Giv'er. The boys had just come off a tour with seminal Canadian rockers Trigger Happy, and were in town to play some shows. Fast forward 12 years. When I found out that Choke was shutting down; and that May 10th would be my last chance to catch up with the boys, I had to act. I made sure I was on the guest list with Smallman Records for the show. I spoke with Pete Krpan, drummer for Moneen, and let him know I'd be there covering the show for blogTO.

Now, like all good stories, this one has a dark period from which our hero must emerge. I ran out of rehearsal at Richmond and Spadina, speed-walking to The Mod Club (College and Crawford). Just as I entered the door, I could hear Choke take the stage. I walked up to lady collecting tickets. "Hi, I'm on the guest list", I say.

I give my details and she shuffles through some papers, checking lists several times.

"I'm sorry, but I don't see your name here", She replies. There was a loud thud coming from my heart hitting the floor.

Downtrodden, I retreated to a local pub to drown my sorrows. Around 11:00 PM everything changed. I got a text message: "Choke is about to play at the bovine, $5." I ran out the door. What a good decision.

What I witnessed was probably one of the best live shows I've seen in about 10 years. Choke took to the stage and rocked for over and hour and half. Played most of [Forward] to an absolutely packed house. A house that new every word and every nuance they could throw out.

I'm sure The Mod Club show was good, but nothing could have possibly topped this. A fitting end for Choke, to be surrounded by die-hard fans ready to tear down the building between pumping fists and tears of happiness and impending sorrow. 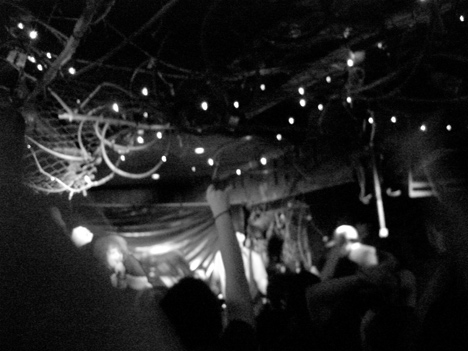