What The Rheostatics Mean to Me

When I moved to Canada 2 years ago, I knew little of the Rheostatics apart from a few songs and what I'd read about them in Have Not Been The Same (which has been gratefully transcribed by radiofreecanukistan HERE). But I was enthralled and intrigued enough that I knew I had to make up for lost time, and quickly. Their music encapsulated everything that I imagined Canada to be - lyrical pop songs both whimsical and vast, epic guitar jams of Crazy Horse proportions, and high lonesome country folk songs all woven together like some sort of genius crazy quilt.

Now, I sit here after the band's farewell weekend with the humble satisfaction of being a part of these history-making shows, but with more than a little bit of heartbreak knowing that my "hello's" were their goodbyes. It's like missing the last train home - you'll figure out some other way to get there but the journey's just not the same. Sure, I've got 20 years of back-catalog to catch up on, but their live shows will be very sorely missed.

Eye, Now, and others have published thoughts and memoirs from celebrities and fellow musicians such as Feist, John Southworth, and Hawksley Workman, but I wanted to share the thoughts & words of the regular fans, from those just getting to know the band, to those who've grown up with them. Take a vicarious walk down a cold road that is Rheostatics memory lane...

"It's like an old friend has an appointment with Dr. Kevorkian, and here we are in the last week laughing like it's old times and it seems like a mistake. There's been maybe one or two other weeks in my life that I've felt like crying as much as this week - death and break-up. Martin's voice breaking--wasn't that fitting, in so many ways? The way he was coaxing the notes out of the air with his hand reminded me of how he so often has a look on his face like he's pulling the notes straight from heaven through his guitar strings: every note is the most wonderful goddamned miracle." - Matthew King 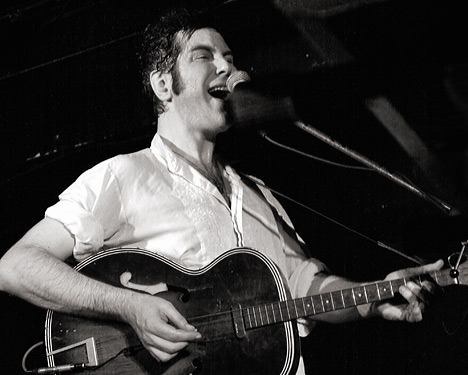 "What a goddamn fabulous way to go out and take us with them ... When the boys took to the stage the place erupted into a standing ovation I will never forget, a feeling in the pit of my stomach unmatched by any goodbye - or any hello for that matter. The standing ovation the boys got was for their music, yes, but the messages they've sent through them is the real gold there - I can hear a great riff or a great voice or a great story in song in any bar I slur into, but what am i getting out of it as an afterthought? Who is going to last? What other band has a Martin Tielli and a Dave Bidini? What other band merges songwriting styles like them? What other band is simply unique? And I'm talking about new stuff. What other band lets you in, asks you to join, and begs you to think about it, to form a relationship to the songs, and not just buy the album or dig their hair style. It may sound trite and so very angsty, but there's a call out now to Music Canadiana to refresh our memories every so often of what a great band can do - not for themselves, but for the whole shooting match, the fans, the history of, and the pure experimentation of music". - Emily Gleeson, Guelph ON 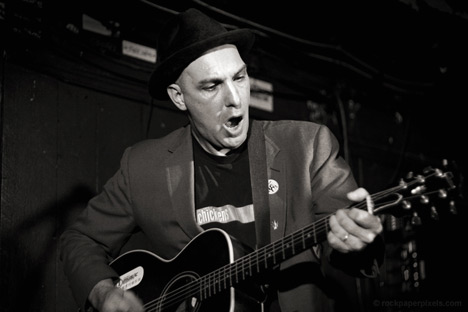 "I loved that they played 'My First Rock Concert' at the 'Shoe; it is probably my favourite Rheos song. Not because of the catchy tune, or any sort of complex instrumentation, I love it because it tells the story of eager concert-going enthusiast kids who "saw XTC twice and thought Paul Weller was Christ". About how Dave and Martin and Tim were all geeky music fans once too ... doing the exact thing that I do to them now ... crowd them after shows, ask for autographs, make awkward comments, and then regret it all in retrospect as you walk away from the venue. It's inter-generational, it just echoes across time." - Martina Zanetti, Toronto ON 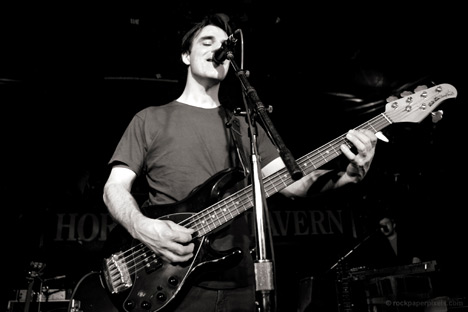 "I sat there thinking about how it took them that long to play Massey Hall, but really it is their venue - the lighting is stunning and at points you could hear a pin drop, every little guitar swoop and cymbal swell rang out pure and true. Sure, some of the rockers might work better in a bar, but all of Tielli's tunes were right at home. Some highlights of the night was Dave (Clark) sitting in on 'Northern Wish', Martin's improv in 'Stolen Car', all the great jokes (Martin: "After this I'm going to open a massage parlour for pets"). Also, the fake snow falling in 'When Winter Comes' was gorgeous and will be imprinted in my brain forever. The night was loose, a little weird at times, the improvs were tight and not wandering, everything came out perfect, Tim's and Dave's voice were strong. Martins' ... oh poor Martin, there was something kind of sad yet beautiful and poetic about him croaking out the high parts for 'Shaved Head' at the very last show. I found it very moving, he still sang strong in the lower parts. Here's hoping that it is only temporary, maybe this will be incentive for him to quit smoking. Anyway, sweet, sweet memories." - Andrew Hopkinson 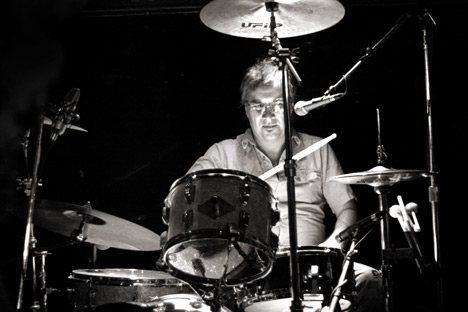 "I think the funniest part of the night was when they started talking about how they had agreed that at their final concert, Tim would cut off Martin's hand and then each band member would cut off the hands of the other members. The only problem being that there would be no one left to cut off the last hand from the last person. Someone from the right balcony then yelled "I'd give you $50 bucks for Tim's hand!", to which Dave responded something like "how much if it was signed?". Then saying "Oh but how would he be able to sign it?". Also, Martin's expression at the end of 'Record Body Count' when he realized that there was a human pyramid behind him was priceless. This show was the biggest they have played on their own to date, and the fans have flown from all over North America, from Florida to San Diego and from Halifax to Victoria to see them. What a pleasure and a treasure it was to have been there. I truly feel that those lucky enough to have been there were witness to a significant piece of Canadian Music History. One of those events where years from now when people talk about it you can say in the words of Dave Bidini "Oh Yeah, I Was There!" " - Darrin Cappe, Toronto ON 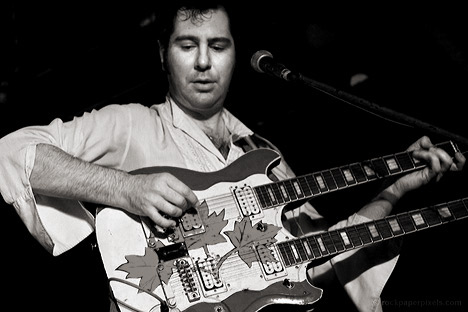 "I was there in row I on the right hand side, crying softly every now and then; my wife burst into tears from time to time too, because she could see how much it meant to me and how moved I was (and all of the other Sprouts too) to be there. I turned to her during the standing ovation for the boys after the first song (Saskatchewan), tears streaming down my cheeks as I smiled and gestured to all of the people in the seats and in the balconies. "It's beautiful!" I told her. We both thought Martin tried valiantly to sing his best, and felt his frustration at not being able to do so. We laughed with the boys as each revealed his "plans" for the future - Tim claimed that he had the rights to "Rheostatics, we hardly knew ye" (for the Casino circuit). As the minutes 'til the end ticked away, I watched and felt glad as I noticed each of the boys really soaking in the moment in their own way. By the time the second encore ended, with the guys singing 'Record Body Count' about ten feet from where we were and tears still streaming down my face, I clutched my wife's hand, told her I loved her and thanked her for coming with me. We walked together into the cold of the March night, and I hoped everyone else enjoyed the show as much as I did. Thank you, Rheostatics, for all your efforts over the years to give me the beauty, the memories, and the fun that you did". - Ed Slater, Hamilton ON 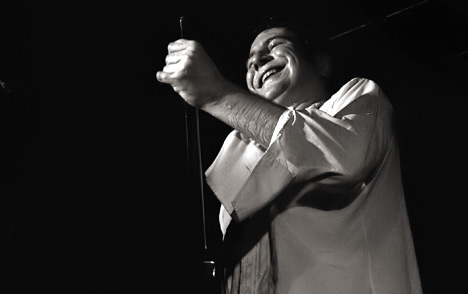 ONE: "Well, legal age life at variety store, these are the things that make me roar: disco sux and so does war, the meek shall inherit the Earth no more. I'm the king I am therefore, What kind of a fool am I? And each time I wake up I try to speak. Well, I felt a cold river of tears upon my cheek. And each time I wake up I feel so weak. Dumbfounded". ('Legal Age Life at Variety Store', from Whale Music)
TWO: "And mothers of the country take two flags and make a sail. We'll sail the big dominion. This song is falling... And did you get my message on the People's Radio? I wrote it in Alberta, across the prairie spine. And I'd rather jump the borders that trail from east to west. And get the booking agent to find another band." ('Northern Wish', from Melville).
THREE: "I dreamed I drove a stolen car. Thru the fields across the yard. Taking out the fences that I'd built between all my friends. Though the snow, they shagged again. I said goodbye, waved them on their own. I drove all night. I drove alone". ('Stolen Car', from Double Live)
FOUR: "Mom and Dad are selfless... and they don't do nothing, worthless. They just work all day and worry about their son: "What went wrong with Martin? Is he dumb?" I just pump gas every weekday night, until the sun comes up like missiles... to my brain. You never said this would be hell". ('Self Serve Gas Station', from Whale Music)

These are a few of my favorite Rheostatics songs, because I could never actually put into words why I love them or why their breakup has filled me with a cloud of melancholy ever since Thursday's Horseshoe show. But all these unanswerable whys are the reason that, after my first Winter Nationals last year, I was saddened at the ridiculous notion that I no longer had the option of seeing them every day. And also why I can listen to Martin Tielli sing his guts out forever. I guess I might never know why, and I don't think I ever really want to. On a cold road somewhere in the south of ontario, there's a crackle in the air. - We'll see you soon Martin/Dave". - Aviva Cohen, Harmelodia

Horseshoe Tavern setlist is HERE (although they strayed off it quite a bit, including a cover of DOA's "The Enemy" and a quickie snippit of XTC's "Radios In Motion", plus an audience participation encore of 'Bread, Meat, Peas, and Rice that went into 'Northern Wish' where the audience sang along to help Martin's ailing voice hit those warbling falsetto notes).

The Massey Hall intro can be heard here, and the songs were:

(Special thanks to the fans at Fish Mailin' for sharing these great memories. For additional Rheo's photos, visit the Rheostatics Flickr Pool!)