The day that Exclaim! magazine's Spring Fling tour decided to touch down in Toronto, we were in the midst of a barely spring-like day. As everyone flitted back and forth between anxiety and disappointment, in sync with the rains coming and going, there seemed to be a perpetual state of dread created wherein everyone was wishing "Please don't rain, please don't rain." Then all of a sudden it started snowing, and I'm pretty sure I wasn't the only person caught off guard, judging from the expressions of those around me at the time.

On the upside, the show (at the Phoenix) would ultimately provide an escape from the unhappy realities of the weather, and even managed to lay out a taste of the spring and summer to come. However, this was only to be achieved by a gradual warming-up of the slightly frosty crowd, and the timeslots allotted to the bands seemed to reflect this sort of thing... at the expense of the opening acts, to some extent.

With a lineup consisting of You Say Party! We Say Die!, Malajube, Chromeo, and Champion, there's many different ways to split the pie.

I was surprised by the order of performances chosen for the show, which were organized in the order given above. I knew Champion would be going on last, but I did not at all expect YSP!WSD! to be the very first act. When I saw the timeslots, I was at first trying to figure out whether the organization was based on the conventional concert sales/popularity ranking, or if the slots had been organized primarily with the music in mind.

I've decided the latter was likely true. Given the styles of each group, this order allowed for a progression from indie-style driving energy to dance-style pounding energy... and the filler track selection between sets seemed to back this up. Being mostly Daft Punk and MSTRKRFT, it drew the whole night in the direction it would finally end up - with Champion and his band tearing the roof off and getting the entire dancefloor jumping. 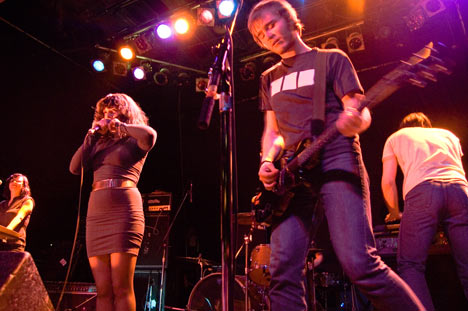 With a lineup like this, no one can really be called 'the opening act,' but You Say Party! wound up plugged into that position anyway, playing from 8:30 to 9:15. Though they definitely did rock, lead singer Becky Ninkovic was dancing more than anyone in the audience, even when she exclaimed "Dance like this!" at one point and demonstrated a rapid shimmy which no one seemed in the mood to copy. The band didn't have any particularly special lighting or stage setup, and though their exact same set might've exploded on a night where they were headlining, they barely managed to get a rise out of the crowd. 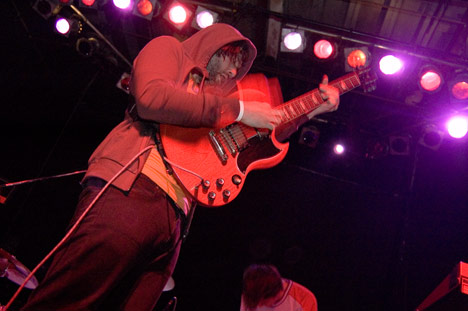 With the only non-Montreal act over and done with, the night moved on to Malajube, of course pausing for some electrohouse while the stage was set up. Normally I wouldn't give much mind to the music thrown on by the sound people between sets, but I'm pretty sure it had an effect on how the performances felt to me, and so maybe it did for others as well. I'll come back to that.

Despite their non-English lyrics (I hear it's called French) the crowd was a bit more responsive to Malajube's music... and music was about all they got. The band delivered more of an end-to-end performance than YSP!WSD!'s casual chatting with the audience, but this could have easily been on account of the language barrier. That language barrier suited Malajube's jammy style nicely, though, and the more time they had to get down and get into the music, the more people in the audience were screaming.

I really expected those first two bands to be the audience darlings, though, and they wound up being rather the opposite. I don't think they had to convince anyone in the room that they were good, but I do think that for most people they served as warm-up more than anything else. Although Malajube was driving and hard, they lacked the presence of even that between-set electro, and when their set ended and the filler came back on it actually did so noticeably louder and fuller. The almost-lush array of interplaying instruments in Malajube's songs contributed to this effect and their set was in some ways one of the more "chill" parts of the night, despite the fact that they were anything but.

While Malajube's equipment was cleared and the stage was prepped for Chromeo, I happened to be on the upstairs balcony and caught the first warning signs that things were about to change - a smoke machine to the side kicking on, quietly starting to fill the venue in preparation for an explosive stage show. 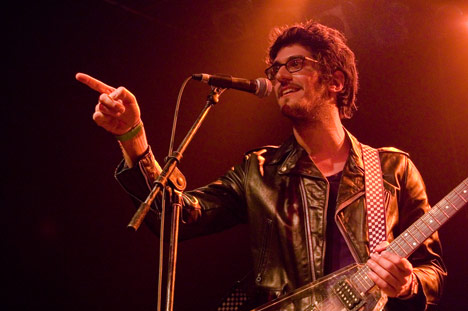 As I've said, the electro/dance current was running around and underneath the entire night up to this point, even though any opportunities for dancing that the bands provided had been largely ignored by the crowd. In this context, Chromeo fit in perfectly, using their own additional back-lighting to emphasize their explosive funk-house-glam-pimp... wait a minute, what was that snippet of conversation I'd overheard earlier in the evening?

Alright, well then, if you aren't familiar with Chromeo, I'd call them a fusion of Daft Punk, Parliamentary Funkadelic, Queen and just a squeeze of Eiffel 65 due to a little too much use of the vocoder.

Speaking of the vocoder, the two-man group had a pretty interesting setup. Pee Thug is the lead vocalist (though only by a bit), occasionally picked up either the electric guitar or bass, and at rare moments whipped out a single drumstick to hit a cymbal or cowbell. The rest of the music was under the control of Dave 1, who provided secondary vocals (usually with filters applied), beats off a laptop, melodies off a keyboard synthesizer, some bass guitar and occasionally a splash of cymbals with the other single drumstick.

It was a very impressive act and they both exploded and funked out as much as anybody could have possibly wanted, but Dave 1's Doctor Octopus routine did introduce a few minor timing mistakes, given how much he had to look after at once. Still, the obvious talent blew that away. Pee Thug was telling the audience to 2-step, but I have my doubts about whether any of that was actually happening. All the same, there was a lot more dancing than during the first two acts.

Now, Champion I'd actually expected to be a bit of a downward turn from Chromeo, in terms of that raw dancefloor energy. I was expecting him and his group to be amazing, based on what I'd heard on my own time, but that same pre-listening definitely gave me the impression that they'd be calmer than Chromeo's funky glam-slamming. I was absolutely and completely wrong about that. 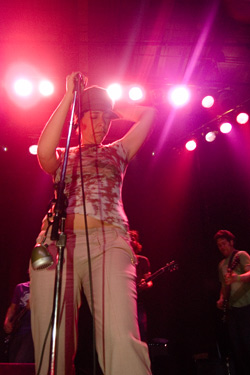 On stage, Champion may be the conductor of a mean-looking bunch of rock guitarists, but his DJ roots showed through clearly. He obviously had a perfect understanding of conventional dance music and used it to take a serious nosedive into pure, pounding dancefloor house.

For the intro, he started off solo with a glitchy but basic beat, largely bass-free, just enough to tease the crowd into excitement. When he offered up the bass half of the beat too, people were already jumping, and then he brought out the first guitarist of his band, "The G-Strings."

Together, they melded the guitar and beat and then began to dissolve both. This calmed down, but then stretched out. Before I realized what they were up to, we were suddenly in the middle of a full house music build-up, slamming the beat in with the guitarist and sending the dancefloor into the air en masse.

Then he brought out the second guitarist. And they did it again, this time kicking in with both guitars and hitting twice as hard. I was stunned the first time they'd done it, and the second time was definitely twice as good.

Then he brought out the third guitarist, and it happened all over again. Then the fourth. By the time the fifth guitarist was on stage, the audience had not only been pounded hard layer upon layer, but had also gotten several guitar solos and other melodic interplay to boot.

That was only the beginning though. As the set progressed, he introduced a powerful and soulful vocalist. Champion's role as conductor of the group was clear, giving hand signals to the musicians to indicate behaviour and timing. However, though they all continually glanced his way, the talent and ability possessed by some band members couldn't be ignored as they laid down incredible solos and perfectly demonstrated all the vital consistencies of dance music at the same time.

Some of what I'd heard before, plus the album name "Chill 'em all," made me expect at least some of the set to be soft. I'd also heard that the band would be 11-people strong, but this 7 rocked like 20 anyway and only ever let up enough to slam everyone again.

The way the energy consistently built throughout the set combined with the fact that it actually amounted to a technically-perfect house music set was really impressive. Few house DJs could co-ordinate this kind of overall progression using just vinyl, while Champion was conducting a whole slew of musicians on top of playing his own beats.

If there had been effects, filters and the like available as options for the musicians, along with more varied beats, this would have gone from being one awesome idea to being an infinite number of possibilities. As it was, there did come a point where it seemed to have been the same sound for too long, even with the included vocals. As a live act, it worked, but had it actually been a house set it would've been a DJ playing remixes of the same one track the entire time.

I hate to apply the "sounds-like" system to a group that was so clearly pushing forward in this strong and unique way, especially since I think something like "live house music for the '00s" captures it quite well.

Still... if I had to, I'd say 65% old-school funky Fatboy Slim, 30% James Brown (leading his band), and the remaining 5% split between Dire Straits and ZZ Top.