If a pre-doors lineup 2 blocks long is any indication of eager fan anticipation, then Toronto must have been foaming at the mouth for this show. Freezing weather and biting winds simply fold in the face of the fervent fan (say that 3 times fast).

Portland's Viva Voce (who are husband and wife duo Kevin & Anita Robinson) opened, gleefully announcing that they'd come 8,000 miles to see us. Their geography might be a little off, but their enthusiasm sure wasn't. The band's reverb-y seventies stoner folk/rock was perhaps an oddball choice to pair with the bouncy-pop Shins, but it thoroughly rocked, no lie. The Robinsons wail with massive skill on their respective instruments (including Anita's Danelectro double-neck, whoa), and it's hard to believe a duo can make such a huge wall of sound. Clearly, they do not fuck around. I'd like to see this band in a more intimate venue, so I hope they'll be back this way on their upcoming solo tour.

The Shins hit the stage under dim moody lights to the percolating "bloop bloop, bloop bloop" sounds of "Sleeping Lessons", which (in addition to being the first song on the new album), was a good choice for an opener, with it's slow build that jumps into a pounding jam and screams off with their heads! Their backdrop (the cover art from the new album) was awesome - like watching the band in a huge psychedelic Petri dish - and the Koolhaus' sound system really delivered. A few more new tracks soon segued into classic singles: "Kissing The Lipless", "Caring Is Creepy" and "So Says I" were all well received with head bobs and toe taps (i.e. Toronto unabashedly dancing). The new single "Phantom Limb" sounded note-for-note perfect; that song was made for live performance. I think the only fault I found with the show was during "Mine's Not A High Horse" (one of my very favourite Shins songs) - front man James Mercer's voice has definitely matured beyond his earlier breathy + nerdy tones, and while it's good to hear him projecting so loudly, here he was shouting where he really should have been more subtle. Eh, I'm nit picking. But a few songs later they more than made up for it - I'll admit to getting a tad sick of both Zach Braff and "New Slang" after the whole Garden State overload, so it was great to hear the band put a new twist on it, slowing the song down a few notches and going nearly acapella - in beautiful 4-part harmony (joined by Anita from Viva Voce, who proved she's got a pretty voice to match the face). Dare I get goose bumps akin to hearing Simon & Garfunkle's "Sound Of Silence" live? Goodness gracious, just gorgeous. 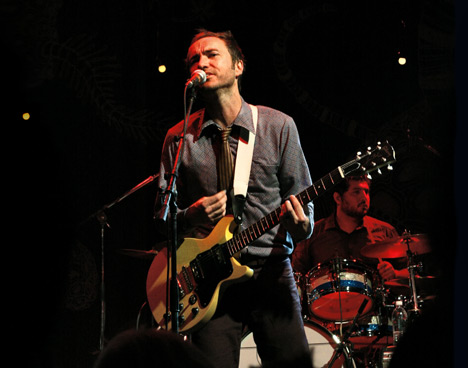 The Shins are evolving in a similar way to fellow indie-pop darlings Belle & Sebastian, expanding in many directions at once, from soaring instrumentation to sultry dance beats. While the purists and hipster critics may find the new album a disappointing departure from the band's "signature style", who really wants talented musicians to exist in a stylistic holding pattern? In the past, their live sound and (lack of) rapport has always been rather hit & miss, and I think Saturday's "hit" (in my opinion) was due to both this being the last night of their North American tour, and the band simply getting comfortable in their own skin. There was unmistakable levity onstage, even the normally deadpan Mercer laughed-off a lyrical blunder and ribbed "the new guy" (the Fruit Bats' Eric Johnson). Those introverted college radio Shins are clearly growing up, and love it or hate it, there's no denying that this is now a band finally hitting their live show stride.