Saturday night was the first ever NO SHAME show, headed up by Montreal-born (but Toronto-living and probably law-abiding) Lauren Schreiber, which took place at The Tiger Bar. Headlining the evening was Woodhands (aka. Dan Werb and Paul Banwatt), followed by Waterloo's amazing electronic rock quartet Bocce, The Miles (who I did not get to see, but heard good things about) and the return of The Republic of Safety. An evening of electronic proportions hopefully to be matched with dancing beyond anyone wildest imaginations.

The Republic of Safety is Maggie McDonald's (Hidden Cameras) rock-out project in which she has had fellow band mate and good friend, Johnny Dovercourt, by her side over the past few years. With members having come and gone, she had recruited the assistance of a new bassist and a saxophone player. Oh, and there was no drummer. Problem solved? Yes! A swanky drum-machine did all of the percussion sweat-work. If there's one thing you should know about the RoS, is that Maggie McDonald is a stage performer. She is animate and an entertainer of a high calibre. She makes faces, she uses her hands, and she'd slap people if she could. However, since the RoS don't grab and beat up the audience, instead they get the audience riled up and dancing. Because this show took place in the small confines of The Tiger Bar, dancing probably involves rubbing shoulders. Imagine what happens if and when the intensity goes up a few notches. The RoS were able to do this, and by the end of their set, there were sweaty folk in front of them with a night of more dancing ahead.

Bocce, the band with electronic satisfaction and, in my humble opinion, the unquestionable ability to put Shout Out Out Out Out OUT of business. Fitting all of their equipment onto the tiny Tiger Bar stage, and the front end of the stage filling up with people, things were starting to get interesting. Bocce had some technical difficulties to start off the night, but with a quick fix here 'n there, they were off 'n going with the force that people have said about them. These being the 2nd time seeing Bocce, both times I had witnessed their drummer break something: a kick-drum skin and a snare, respectively. No, they don't have flimsy equipment. They just pound the hell out of their instruments! At points, there was no room to dance. You have to share the space around with the people who were next to you. As for my opening comment about Shout Outx4 getting the beat down, this is true. You don't hear Shout Outx4 singing songs about RRSP's and GIC's for fun and brandishing a cowbell for percussion. Take your love of electronic music and go with it. Enjoy this band while they play small spaces. Bigger times? Yes.

Woodhands was originally Dan Werb, a Vancouver native who was first seen around playing piano before Adorables' shows at The Embassy. From there, he was promoted to Adorable, but before anyone had even known, Dan Werb was an electronic music artist. He is all about the keytar and other noise-makers. Recently implementing drums into his set and some vocals, Woodhands has become something of a party. As their set began on Saturday night, everything was calm and people were listening and slightly shifting to the music. As the shows went on, the motions became stronger, and the people began to lift their feet. After a while, it seemed as if the crowd was dictating the duration and power of the songs as they danced and pushed for more. Crowd-surfing and moshing grew and grew. Because of the low ceiling, crowd-surfers scaled the ceilings and shook hands with the disco-ball. There was less and less room on the dance floor at a point, so people began to pile on stage and let loose. Coordinating well together, Dan Werb, Paul Banwatt & Maylee Todd put on a supreme sweat-fest of a headlining bill.

For a debut, NO SHAME was an astounding success. Because of this, there will be another one: 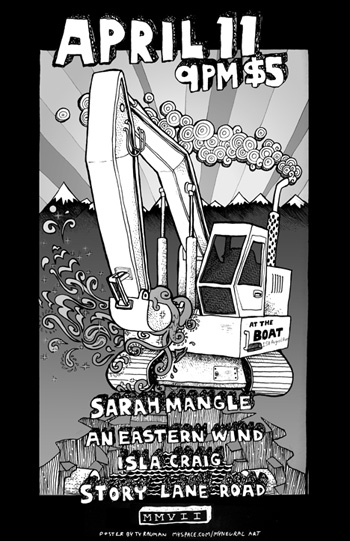