Anyone craving a deeper earth tone this Saturday night than green beer and plastic beads can provide, take heed: Interchill Records joins Alien Influx, Promise and Small World Music for a night of downtempo, organic electronica and other exotic beats unlike those offered by typical DJ events. This hot ticket is limited to 250 souls.

The DJs and producers playing Saturday night include BC visitors and label reps Naasko and Andrew Ross Collins, Toronto-via-BC's Noah Pred performing as Shen and local CIUT DJ Medicine Man along with Legion of Green Men's Lex & Rew. Based on Salt Spring Island, Interchill's artist and DJ roster will this year play festivals in the U.K., Italy, the U.S., Canada, Mexico, Russia, Japan and Brazil.

Here's what Naasko, Andrew Ross Collins, Medicine Man and Shen had to say about this intimate Toronto label party, the state of downtempo and other global grooves, and how the Toronto scene measures up internationally.

On downtempo's penetration into other dance music forms and mainstream culture:

Naasko: Downtempo electronica in all its splinter genres can be heard around the world. Though still retaining an underground sensibility, the kind of music that Interchill releases has been making its way through new scenes and speaking to different kinds of people from Japan to India, Iceland to Chile. While 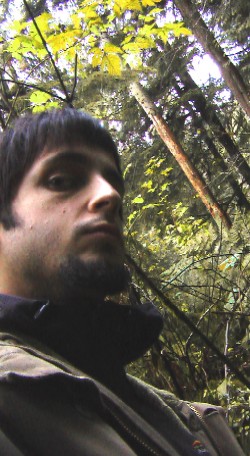 we have no aspirations to be the next big thing, we hope to continue connecting with like minded communities around the world.

On the contrast between the downtempo/world music fusion scenes in Toronto and coastal BC:

Shen: Downtempo is very popular on the West Coast right now. Conversely, techno is much more popular out East. It's rooted in some fundamental cultural differences between the two areas. The West Coast is much more laidback, while the East churns at a somewhat faster pace. The preferred electronic music styles of these two locales reflect the difference in lifestyles. Also, outside of areas like the West Coast where it's been popularized, most people think of downtempo only as music to chill out to. While this is the case with a certain strata of downtempo music, there's also some heavy-duty fare (dubstep, glitch-hop, etc.) that's great for the dancefloor.

Medicine Man: Seems that downtempo as a genre has grown and continues to do so globally... though it's one of those catch-all phrases that is being used to describe so many different musical aesthetics. Downtempo / midtempo / uptempo are so subjective. Even beats per minute don't tell you the whole story. A dancehall track and a hip-hop jam can have similar BPMs, but one is bumpin' and the other is chill.

To partner world-fusion and downtempo may or may not make sense. The two genres are logical partners in the case of Interchill, because the label explores music that moves between organic electronica and cultural roots traditions.

On the next steps for this type of music:

Naasko: As more and more people have access to software and the gear to make music, we're going to start hearing some pretty interesting sounds and spaces.

Richard: Europe, South America and Asia are ahead of North America on this curve... from what I gather world-fusion, global electronica, and so on are much more popular in club scenes elsewhere. But American-influenced cultural hybrid pop still rules in many spots.

Downtempo is geared toward hanging out and a more individualized intimacy. Uptempo seems to be geared toward a collective intimacy and a blurring of the individual identity. It's also seen by many as the only vehicle for movement, dance and energy exertion. But grooving on the downtempo can elicit a profound and contemplative engagement with movement.

At the end of the day, uptempo rules in the club and bar scene. The formula may be a simple one. Clubs want people to jump around and get hyped so they'll drink more.

(As for what's coming up for Interchill, releases and early looks at who's playing which festivals are here.)

On what audiences can expect on Saturday (music to chill to, dance to or both?):

Andrew: This night will be far more interesting from a musical perspective than say a night of banging techno/house/trance. There will be greater variety and contrast. You'll be able to dance and also talk to your friends without shouting in their ears.

Shen: My set should be suitable for people with energy to dance to it, as well as for those who prefer to sit back and soak it all in. I try to straddle the line between danceable grooves and atmospheric narratives.

Richard: I'll be playing music that requires more effort by dancers and listeners to engage with the complexities of the rhythms. My intention is to encourage people to groove and move through the ebb and flow rather than just stomping to the 4-4 beat. But to be clear, deep bass and percussion are an important part of this equation. Less "in your face" and more "in your soul" is the dancefloor theme I'm trying to evoke.

On establishing a presence in Toronto for Interchill artists:

Naasko: We're putting energy into raising the label's profile worldwide but are starting the year close to home. Interchill is much better known in Europe and Australia than it is in Canada ... the show in Toronto will showcase some great talent from the Canadian downtempo scene as well as spotlightling one of the most diverse and respected labels in the world for this type of music.

Andrew: I first deejayed for Justin [Alien Influx organizer] back in 1994 at one of his guerilla gatherings in a house on Carlaw. Interchill artists are around the world, and the label has many old friends in TO.

Images of Medicine Man (top) and Shen provided by the artists