CMW live shows began last night, and I had a dandy time down at Spadina and College, hopping between the Silver Dollar and the ElMo. It was a night of extremes: loud, quiet, jam-packed and sparse at times.

High Dials @ Silver Dollar Room, 11 PM: The High Dials have gone through a lot in a short span. They lost their drummer, then their bassist/sitar master. A lot of bands would have called it quits at that point, but if there's any band capable of reinventing their sound (and surviving a concept album like A New Devotion), the High Dials are it. They ran through a speedy set of new material in front of a jam-packed crowd. Their album is due later this year, and is tentatively titled "Moon Country". It's too early to say whether their new songs will have any staying power. I liked the new songs, but there was nothing special that really jumped out at me. However, I'm willing to withhold judgment until I hear the release, because the High Dials have a real knack for recording cohesive albums from start to finish.

Royal Wood @ Elmo, 12 AM: After the High Dials wrapped their set, I crossed the street to visit a friend who was working the show at the Elmo. I heard Royal Wood on CBC Radio 3 last week, and his music piqued my attention enough to merit a visit. I was a bit disappointed to find the Elmo 1st floor almost completely empty. It certainly made me wonder how people go about choosing which shows to see, and whether better promoting would have made a difference. Royal Wood's set was exciting to watch despite the under-capacity crowd. He jumped from keys to acoustic with ease, and his backing band played a crisp set with him. Moving vocals and warm keyboard arrangements with a broad dynamic range really kept my ears attentive. My favourite moment was the impromptu sing-along with the phrase "There's no place like home". He closed with a fairly disgusting (in a good way) keyboard solo, and mentioned to the crowd that he will be playing at the Cameron house every Monday. 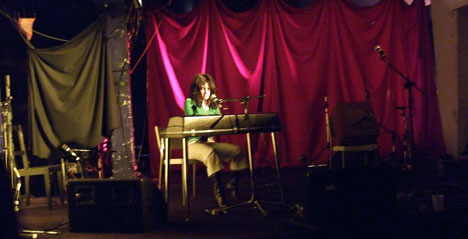 Danielle Duval @ Elmo, 1 AM: Danielle Duval took the stage all by herself, doin' the whole one-woman band act. Her usual bandmates were down at the Boat playing another set, but if that frazzled her at all it didn't show. Most of her set was acoustic, but it wasn't the kind of quiet singer/songwriter stuff I was expecting. I was delightfully surprised to hear that she played acoustic with a lot of energy, and filled out the tunes with impressive vocal work. Heck, she even played a cover from Grease! Danielle closed the set on keys, where she was equally talented and engaging. She plays again tonight at Hal's Ballroom, 244 Adelaide St. W, for the Pitter Patter Festival at 11:45 PM.

---
Update: First pic of the High Dials by Beth Hamill