There are several things still murky to me about the maiden voyage of Yacht Rock, a Smooth Sailin' production celebrating the buttery vinyl produced between 1974 and 1982.

I don't know who Crewman Crinkle is, or what the trophy looks like relating to the best moustache contest -- real or fake -- and ceremony he'll conduct. Whether organizer DJ Syrum (once and future contender in the real moustache category) will judge the tropical costume contest or be allowed to enter? A mystery on the high seas, Admiral. Can I confirm this California dreamin' as the inspiration (Syrum's, likely) for the new recurring party? Not quite. Nor can I tell you where all the enthused crew discussing the event found the four pages worth of fromage-homage album art during the leadup to the event, which debuts at Czehoski tomorrow night.

What can I tell you about Yacht Rock? 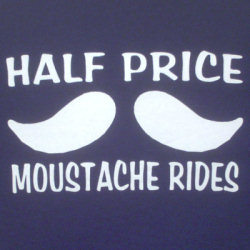 "Mucho Macho DJs" Syrum (Brad Machry) and Josh Laing will break from their usual mixes of jazzy, jungly, dubby beats for the likes of The Captain and Tenille and The Doobie Brothers. If you like this sort of kitsch -- and I sure do -- it's going to be a cuss-worthy good time, with costumes strongly encouraged, Mai-Tai and Pina Colada specials and prizes for "smoothest tropical ensemble."

Images lovingly pirated via the weird and wonderful OM Message Board