Kids on TV @ The Mod Club

Nothing made me angrier than when I watched Maynard James Keenan sing an entire show with his back to the crowd. When I go to a concert, I expect to see a show, not listen to the music I already have at home. When it comes to electro a lot of that music is prerecorded and played back by a sampler, and for artists choosing the not-so-live playback route, an awesome live presence is essential. Daniel Hunt of Ladytron once described his band's sound as "Electro, with a fist". After the February 2nd show at The Mod Club, I'd have to describe Kids on TV's live sound as electro getting fisted. 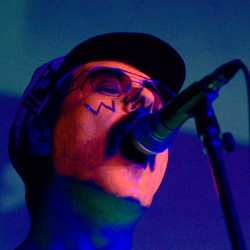 An extended quiet followed the living tennis ball of a performance by Dandi Wind. People had seen the Kids mingling in the crowd earlier, already decked out in full dress and make up. What's the hold up? I'm about a foot away from The Mod Club's stage when John Caffery, Roxanne Luchak and Scott Kerr of Kids on TV step into the lights with UV coated face paint and the club's black lighting kit turned up to 11. I notice a computer keyboard and a hammer not 3 feet away from me on the stage floor. John asks the TSX if they're looking for a company, 'cause they are the company, and proceeds to smash the crap out of the keyboard with said hammer.

A hunk of metal traveling at 200 mph bounces of my chest. It's OK, though; it missed my camera's lens by about six inches.

KoTV have been playing together for many a year, and they still manage to keep their sets fresh and exciting for the clamoring crowds that attend their shows. Arriving as a three piece, they started the show with the interactive "The Company", and followed not too long after with the bark-filled "Cockwolves". There was a full-moon inside the Mod Club tonight. 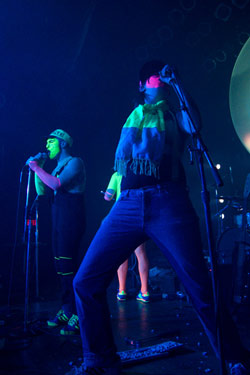 The whimsy of Scott Kerr's performance, complete with an inflatable doll with a ten inch dick, is only made all the more engaging because of his relative tallness when standing next to the other Kids. Either that or the orange UV glowing fishnets, I've yet to decide. Contributing guitar chops with an axe that looked like something out of an industrial metal band from the Blade Runner Dimension's gear, he both crooned and screamed throughout the night while bouncing lightly like a kids toy behind the mic.

Roxanne is always in charge of what goes up on the video projectors. The grainy film being looped and "mixed" with other clips during and between songs only added to the visual stimuli that was the band themselves. Let it be known, if you have a small group with prerecorded samples, it's stuff like what Rox provides that's needed to take a good show into the realm of the great. Combine that with an icy stare and lungs that can rip the fur off a giraffe, and you recognize Rox to be much more than "the video girl" in the group.

John Caffery, front and center, put on one of the wildest performances I've ever seen from a front man. About the only time he was moderately docile was when he was playing bass, which is unfortunate 'cause it'd be nice to see him get all Wes Borland while playing the 4-string. However, when a guy starts out mostly dressed and smashing the crap out of electronics, and ends up mostly undressed and giving a member of the audience a simulated blow job after breakdancing on the club's main floor, it's hard to complain about a tepid performance. 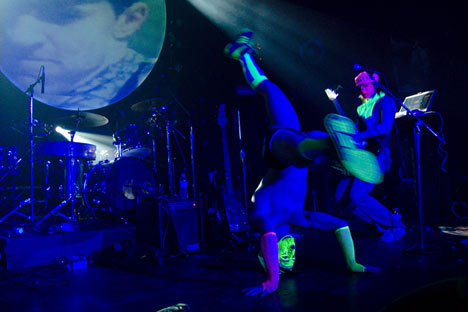 Kids on TV put on an awesome show for the not-so packed house. The lack of attendance was a disappointment, and I blame that on a lack of advertising outside of the Kids' website; Eye Weekly had a blank slot in their listing for the Mod Club. Coupled with the looping and hallucinogenic sound of openers Sons of Brixton as well as the energetic (and impossible to photograph) performance of Dandi Wind kicking off the hardcore electro evening, however, it sucks to be anyone that wasn't there.

Kids on TV can be seen again On February 18th at the Whipper Snapper Gallery at 587 College Street. It's an all ages show, and more info can be found the Gallery's homepage.