It was cold and snowy, But Jon-Rae and the River warmed the hearts and bodies of all the people at the annual WinterCity festival at Nathan Phillips Square on Sunday.

But honestly, could you ask for anything better on a nice snowy day than the heartfelt sounds of this band? 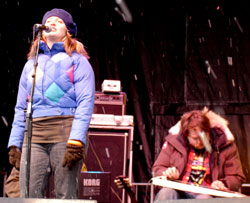 Playing for just under an hour, Jon-Rae and The River brought their signature sounds to the main stage at NPS and got the crowd moving. Its important to point out that I noticed people actually showed up to see them play, not just random people walking through the festival scene.

Though there was a lot of that, and it was a great sight to see. From little kids to grandma and grandpa, people could be seen dancing and clapping along.

"The crowd was a lot bigger and better than I had thought it was going to be." says Jon Rae. "And it was a fun show, despite the fact that the heaters on stage kept turning on and off."

Jon Rae and the lads (and lady!) will be embarking on a cross-Canada shortly in support of The Constantines. Their next stop will be at Lee's as part of the tour sometime in March.