The squat bungalow looks like any other house in downtown Toronto. I've walked past it a million times without knowing that its basement is the source of a curious phenomenon threading friends and music together for the good of the community.

I'm standing with James from Ohbijou, a seven-piece outfit based in this hybrid apartment/jamspace. We're in the basement where everything started, including the upcoming Friends in Bellwoods compilation CD. I almost expected some kind of musical ether to permeate the air. Instead, as James explains: the beauty of this place is that despite all the music and people who have passed through here, it is first and foremost a home for people. 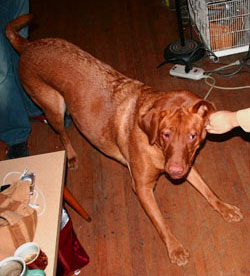 Casey and Jenny Mecija, sisters and bandmates in Ohbijou, have lived here for 2 years. They're quick to introduce me to Appleby, an instantly endearing dog with great manners. The sisters tell me of a time when they held a fundraiser show in the basement for Appleby, who was in need of hip surgery. It was at the very show that Bry Webb (of the Constantines) left his mark on Bellwoods with an "intimate and moving performance." He is among dozens of other musicians who have influenced the space and recorded for this compilation.

Following this tradition of bringing friends together for a good cause, all proceeds from the sale of Friends in Bellwoods is being donated to the Daily Bread Food Bank.

Join me tomorrow when I will review the compilation and explain how to get it.