Yes, Sloan. After nearly 10 years of living in Toronto but seldom playing in it, Sloan packed the Kool Haus - seriously packed it - Thursday night to remind us all they are back with a bullet, and that everything old is new again.

Fans and critics alike are pretty damn thumbs-up over their latest release "Never Hear The End Of It" calling it a return to classic "Sloan style", with it's insanely catchy melodies (ala One Chord To Another) and clever song segues (ala Between the Bridges). Their latest tour's setlist is a showcase of the new songs peppered with classics, and it's easy to tell that the band is inspired anew and loving the opportunity to showcase the new material. And, as evidenced by the nonstop bouncing and handclaps, the Kool Haus audience ate it up. 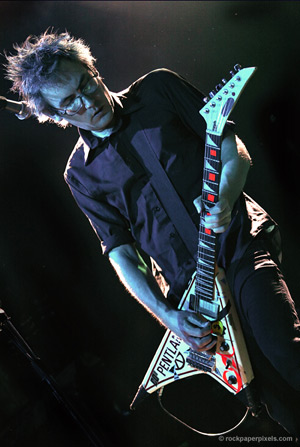 Vancouver's Yoko Casionos opened the night with a tight & engaging performance, led by charismatic front woman Misty Reid (who later joined Sloan onstage for an encore duet on "I Can Feel It", battling Chris Murphy for who can out-sass who). The Yoko's will be playing Wavelength's December 3rd show at Sneaky Dee's this Sunday - a highly-recommended good time if you're in the mood for bouncy pop.

Sloan's set kicked off with 4 new songs, including one "old is new" - "Ill Placed Trust", which was originally an old buried B-Side and is now re-done more growling & rocking than ever on the new LP (and will be it's next single). Just when the crowd started hankering for classics, Jay Ferguson launched into "The Lines You Amend", prompting 'Slooooaaaan!' chants to turn into 'Jayyyyyy!' chants, in turn prompting Murphy to mockingly roll his eyes. (Perhaps because no one was chanting 'Chrriiiis?!') Drummer Andrew Scott passed off the sticks to Murphy and got ample mic time, and Patrick Pentland's "HFXNSHC" (Halifax hardcore, ya know) got folks moshing. Actually moshing at a Sloan show. (Yeah? So? I did not. Shut up!) New tour member Gregory MacDonald brings back the much-missed keyboards, adding live punch to new Pentland songs like the excellent "I Understand". (Between songs at the Kool Haus MacDonald even dabbled in the keys intro to "The N.S.", and I think many of us got a wee bit excited at the prospect of hearing that rarely-played live song, but alas it was not to be. Tease.) Full set list HERE. 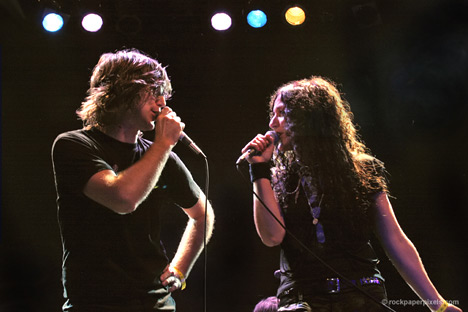 Perhaps one measure of a "mature" band's staying power is the ability to not only attract new fans (which they definitely have), but also to re-engage former fans that are on the fence or have left the corral altogether. I've seen them well over a dozen times now and will admit I was falling into the later catagory, but this show made me fall in love with Sloan all over again. It's true ... fan-girl powers, activate. If they can keep on bringing their brand of unabashed rocking power-pop, and bring it with the same fun, goofy, imperfect joy that they did last night, I hope that we never do "hear the end of it".