Some people may disagree with me when I say this, but I must testify to the belief that the turntable is a real musical instrument. This idea would have been a joke some decades ago, but even today people outside of turntablism look at the art and see its value and worth.

I remember when I was at the V festival this summer and Kid Koala was dropping a set using Frank Sinatra's "Moon River", making an entirely unique sound. Indy rockers all around me commented on their amazement and agreed that they were seeing a musical instrument being played. Due to the underground nature of Hip-Hop and DJing, one used to have to learn from friends or experiment on their own without formal training. This has now changed in Toronto thanks to the Scratch Lab, Canada's first DJ institute. Sookie and I recently dropped by to check it out. 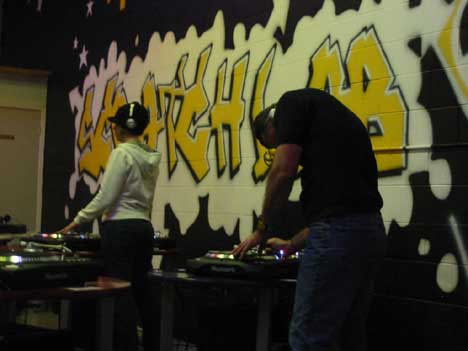 Upon walking through the doors at Scratch Lab, we were extremely impressed with the highly professional layout of the entire place. We were promptly greeted by Jordan Fisher, the director of marketing for Scratch Lab and one of its founding members. Jordan and two other friends, Abby Tobias and Baba Kahn, came up with the idea a few years ago while out together for a drink.

After accumulating financial resources from their own pockets with the help of family, they were able to secure a sponsorship deal with Numark, a turntable company. Instructors at their school were chosen for their skills, personality, and experience in the Toronto club scene and radio shows.

We were first shown two practice rooms where students can practice before or after class. Jordan explained that the rooms were primarily designed for new students who were unsure about whether DJing was for them or not. By using the practice rooms, students can practice and try it out before making a commitment of investing in their own system. We were then led into the main classroom, which was originally a garage space.

The teacher, DJ Grouch, was on an elevated platform at the front of the class with his set of tables and a large projector screen behind him showing his tables and switches. The classroom was divided into twelve different booths, each with a set of turntables and records selected by the school. Today's lesson was beatmatching, a technique whereby a DJ smoothly transitions between two records. DJ Grouch would demonstrate, and then have each of the students try and match up their record tempo and speed to the one DJ Grouch was playing.

The interesting thing was that DJ Grouch could single out the sounds from each person's turntables, and all the students could learn from each others mistakes. Time to time, Grouch would even draw diagrams on a whiteboard to explain his concepts more thoroughly. From the way the lesson went, I felt like I was in a fusion of science class and music class.

The curriculum at Scratch Lab is actually approved by the Ontario Board of Education. Jordan told me that it was a bit difficult to convince the board members that the turntable is an instrument, but in the end they wanted to reach out to kids at schools and felt that this would be a fresh new way to do so. Classes are once a week, 70 minutes each.

The beginner program focuses on the basics of the equipment and technique. The intermediate focuses a bit more on the business aspect, while the advanced program covers more difficult techniques like beat juggling and scracthing. People can come in and take whichever program they feel most comfortable in. The age range of students varies, the youngest student being 11 and the oldest being a 51 year old woman! Demographics are also quite varied, with a wide range of races and cultures.

Overall, Jordan and his associates hope that their institute will raise the talent level among DJ's and produce more creative musicians. So if you're looking to try something new or you've always dreamed of mixing and scratching, hit up Scratch Lab and give it a try.