There were three more sexual assaults reported in the Bloor and Christie area over the long weekend, according to police. Two of the incidents took place within five minutes of each other on Montrose Avenue south of Harbord. Police haven't said if they believe the assaults are linked to similar attacks over the summer.

Another day, another poll. This one says Toronto and GTA residents are split on whether to fund transit and highway upgrades with new taxes and fees. According to the Globe and Mail, 34 percent of those asked were outright against the idea of any new charges while 28 percent were prepared to pay. What's the consensus here? Pay up or shut up?

There's been talk of repurposing Casa Loma for some time now, but how about turning the old mansion into a museum of Toronto? The historic building could become place for us to show off our local treasures that otherwise might languish in storage. The Toronto Star discussed the idea in an editorial yesterday. What do you think the city should do with the property?

Some wheelchair users in Toronto are having a hard time finding accessible transportation after regular business hours, according to a report in The Star. Some modified taxis are unavailable after 6 p.m. or simply charging considerably more than the standard meter rate.

The Florida pastor who made headlines last year for burning copies of the Qur'an is coming to Toronto Thursday to address a rally at Queen's Park. Or is he? Border officials say Terry Jones could be denied entry to Canada for being an all round hateful piece of work, or words to that effect.

Bummed that Toronto's professional sports teams are in a funk, on strike, or still in pre-season mode? Here are some alternatives courtesy of The Star.

Finally, we played yesterday but here's another round of "Guess the Intersection." Tell me if you can place this bankrupt stock store in the comments' section. 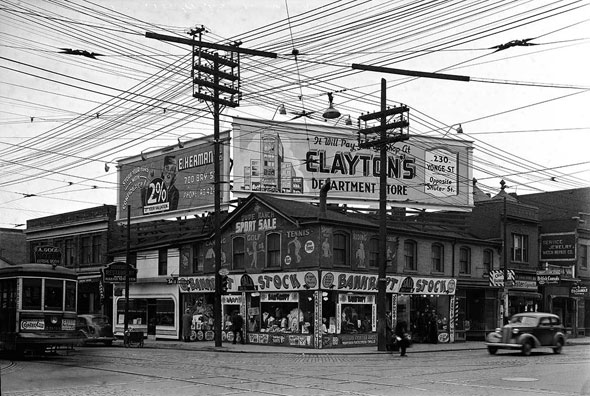 FROM THE LONG WEEKEND