Toronto Police say they believe notorious Scarborough gang the Galloway Boys is responsible for the Danzing Street shootings and several other recent high-profile murders. According to the Globe and Mail, the Galloway Boys are one of the areas better organized gangs. Centred around Kingston and Galloway Roads, police believe the gang was involved in the death of Joshua Yasay, 23, and Shyanne Charles, 14, on July 16 and seven other earlier shootings. More details are expected later today.

High earners at city hall could be next on Rob Ford's chopping block. Outlining his latest cost-saving plans to reporters yesterday, Ford said the city pays too many directors, managers, and supervisors. According to the National Post, almost 50,000 people work for the City of Toronto and its extended group of agencies, boards and commissions. Naturally, Ford also likes TTC chair Karen Stintz's plan to contract out some cleaning jobs.

A poll by the Toronto Star has found - hold on to your helmets - that 72% of Rob Ford supporters support a licensing program for cyclists. The poll of 834 Toronto residents by Forum Research also found 67% of downtown and East York residents support the idea, an increase from 2011. We discussed the pros and cons of a bike license earlier this year.

After yesterday's slightly disheartening news from Lafarge cement regarding its place in the Port Lands revitalization comes word that Pinewood film studios is planning to expand. With unanimous support from the executive committee yesterday, the new Port Lands plan is now set for council. The progress means Pinewood can justify addong three new sound stages and 100,000 square feet of office space.

Scarborough East councillor Ron Moeser has had to sit out a few meetings recently due to continuing health issues. Yesterday he sent a note to other councillors, complete with a picture of his leg in a painful looking brace, saying he expects to be back in action in October. Ouch.

Finally, someone, possibly U of T engineering students, have been scattering these Mario-style power-ups around campus as part of Frosh celebrations. Dare you to open one! [via Reddit]

This week's round of guess the intersection takes us to... well, that would be telling, wouldn't it. Answers as usual in the comment section. 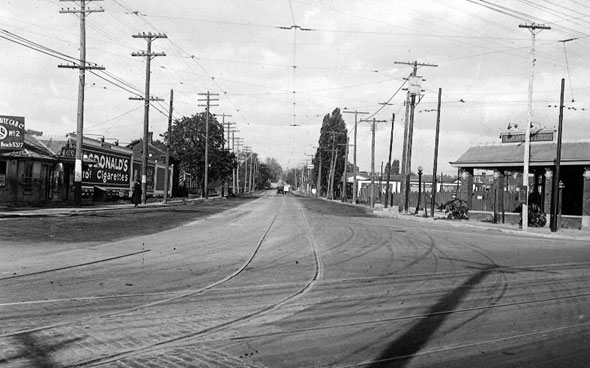 Photos: "401 sunset" by Proletar1at in the blogTO Flickr pool and City of Toronto Archives.