Well, no big surprise there. Rob Ford says he doesn't support Karen Stintz and Glenn De Baeremaeker's OneCity transit plan - even though it includes the Sheppard subway he wants - because the TTC chair and vice-chair plan to fund the expansion project with property tax. The mayor is sticking to his hope the private sector will pay out for subways. Get set for more transit showdowns this summer.

If you're wondering where on Earth this transit plan came from, The Star tells how councillors and TTC chair and vice-chair Karen Stintz and Glenn De Baeremaeker carefully nurtured and hatched the plan.

Yesterday we told you Captain John's floating restaurant had closed. Today, though, The Star reports the ship itself could linger on while a marine court decides its fate. The Toronto Port Authority ordered that the ship "refrain from leaving" (no problem - the ship has no engine and has been wedged in the lake mud since 1975) and "Captain John" Letnik, who runs the business and lives on the boat, says he ain't sunk yet.

Pride organizers say they don't know if Queers Against Israeli Apartheid - the controversial group that could have caused the event funding issues - will be marching in the parade on Canada Day. The issues centre around the use of the word "apartheid" in the group's name, which people perceive as discriminatory or and anti-Semitic.

The owner of the bicycle photographed stuck in the revolving turnstile at Spadina station has been found by The Star. Turns out Roney Lewis was told not to bring his bike on the subway at rush hour and ended up getting his bike jammed in the one-way gate. Oh, and it took four hours to remove the bike. Yikes.

Grid's Ed Keenan has been chewing on the Ontario chief coroner's recommendation that bike helmets become mandatory for all cyclists. The writer says we should focus on providing more bike infrastructure instead of legislating safety gear.

"Oven-like" conditions could be heading into southern Ontario later today, tomorrow and over the long weekend and Environment Canada says temperatures could hit the high 30s, feeling like even more with the humidity. Yep, that's right, an oven. Toronto should be slightly cooler, with temperatures topping out around 32 degrees.

This week's round of vintage street spotting brings us to, well, it's a secret. See if your detective skills can pinpoint these two city streets. Answers in the comments' section. 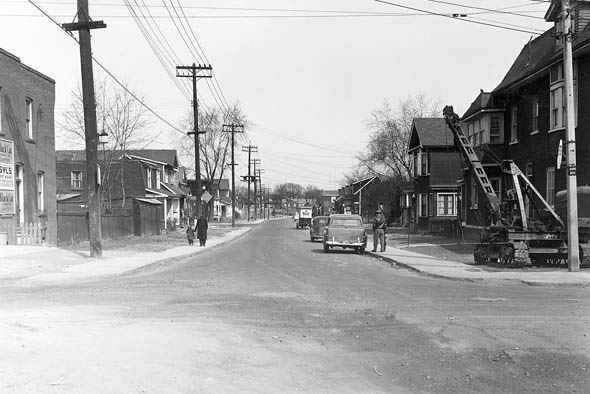