Councillor Shelley Carroll, a potential candidate in the 2014 mayoral election, says Rob Ford should spend more time in his office and less time on extra curricular activities like his weekly radio show. Unlike other members of council, Ford does not make his schedule public and is less commonly at city hall. Councillors Doug Holyday and Denzil Minnan-Wong were quick to defend the mayor, saying he is always available by phone and working hard while out of public view. Shouldn't the mayor make an effort to be more accessible?

According to the The Star, the latest casino poll suggests many supporters of the project would turn into opponents if the proposed resort were built in their neighborhood. Those polled also found sixty-two percent want a referendum on the topic rather than letting council decide. Would you support a casino even if it was built near you?

What does $1.27 billion get you in this property market? How about two million square feet of office space in one of Toronto's landmark buildings, the Scotiabank tower and plaza at King and Bay. The famous red granite building was sold yesterday for a Canadian office property record. Scotiabank, like other major banks, will rent its headquarters from the new owners.

More concrete fell from the Gardiner Expressway yesterday - the third time this month - near lower Simcoe Street. No-one was injured but the aging highway's tendency to shed substantial pieces of its construction material is starting to get worrying, especially for people who regularly drive, walk or bike underneath. Scheduled repairs are due to begin July and could take ten years to complete.

You might be surprised to learn Warren Kinsella, the prominent liberal spin doctor, author and commentator, is in a punk rock band called Shit from Hell. Perhaps more surprising is Torontoist's thumbs up verdict of the band's latest release Why Do You Hate Me?

Toronto's very own Batman has been cruising the streets for several months now, entertaining and generally terrifying passers by with his throaty voice and sudden questions. This picture, though, suggests he might just have met his match. (via Reddit)

See if you can name this rickety looking intersection photographed circa. 1921. 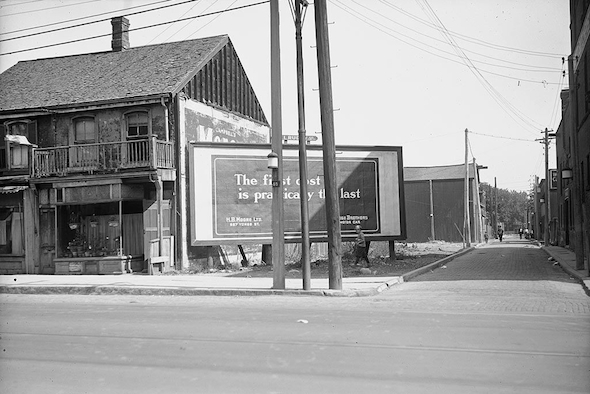