Morning Brew: Rob Ford vs. the Toronto Star, closing the Allen, a look at Toronto's furriers, council to vote on food trucks, ducks on the 407, and the Jays win

In the latest bizarre episode involving the media at Rob Ford's house, a Star reporter, Daniel Dale, was apparently chased and threatened by the mayor last night while photographing a patch of land near the Etobicoke property. Get the full story and reaction here.

The inevitable traffic disruption caused by the installation of the Eglinton LRT is causing some buzz, and it sounds more and more likely that the Allen expressway could be closed to store tunnel boring machines and other work equipment while the construction project passes through the area. The closure will apparently speed up overall construction times, but I'm not sure the extra travel time will endear people to the LRT. Would you mind avoiding Allen for a year?

Food trucks could be allowed to set up shop in surface parking lots if Adam Vaughan gets his way at a council meeting next week. The Victorian rules governing mobile eats in Toronto have been a hot topic of discussion in recent months as more and more chefs and entrepreneurs decide to take their food on the road. Vaughan hopes Council will allow food trucks to line up at the edge of parking lots to serve customers on the sidewalk. It might not sound like much, but it's progress if it passes.

It might be handmade and therefore in some way de rigueur, but fur doesn't have such a great reputation in the minds of many. Nevertheless, furriers were an important part of the fashion district historically located around lower Spadina. Writing for the Toronto Standard, Lucas Van Meer-Mass took a look back at fur's role in the formation of Toronto and its place in today's society.

Were you wondering how Rob Ford's budget cuts compare to the surplus announced at the start of this week? The Grid were, and the results may surprise you.

If this doesn't put you on the edge of your seat - you're a husk incapable of emotion. A CTV news chopper passing over Highway 407 yesterday videoed a family of ducks dodging cars and trucks in an attempt to cross the busy road. If you're worried about watching, don't worry - it works out OK.

This week's guess the intersection should be pretty fiendish - see if you can figure out where this photo was taken. I had to redact a small part of the picture to keep it interesting. 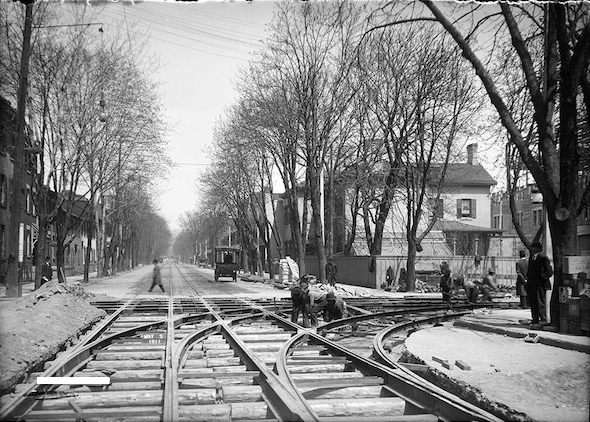