According to a new poll from Forum Research, Rob Ford's approval rating continues to fall, including a significant seven per cent drop in Etobiocke, where his base of support has typically been the strongest. I guess that whole incident with Toronto Star reporter Daniel Dale didn't actually work in the mayor's favour. What a shock.

The TTC did a little bit of damage control yesterday after some suggested the existence of a rift with Metrolinx over construction plans for the Eglinton Crosstown and other LRT lines. "We equally want to get shovels in the ground. We're not averse to a new model," TTC CEO Andy Byford explained. That said, it seems clear that the Commission wants to drive home the point that its ultimately not responsible for the construction of the lines. That way, when the inevitable delays arise, TTC staff can say "I told you so."

Also interesting is news that Metrolinx will pay some of the operating costs once the lines actually open. The provincial agency will cover the difference between what the TTC currently pays to run buses along Eglinton and what the more elaborate LRT line will cost. NOW reports that this would be the first time since the Harris government that Toronto has received provincial funds for running transit.

That was fast. RioCan, the developer who recently acquired the Kromer Radio site on Bathurst south of College, has already applied for multiple zoning variances to construct a 130,000 square foot building that could house big box retail on the upper level. The City's committee of adjustment, however, has at least temporarily nixed the project. RioCan is now expected to take the proposal to the Ontario Municipal Board.

The Word on the Street Festival is headed back onto the street. With Queen's Park closed to major events for restoration work, the festival will move to the adjacent roads like Queen's Park Crescent, Wellesley, and College.

Today is your last chance to weigh in on the best and worst in Toronto architecture from 2011. Voting for the PUG Awards closes later today, so be sure to confirm just how ugly this building is, okay?

What do you buy the transit geek who has everything? Why, TTC tie clips, of course. Spotted on Etsy, these little accessories are hand-fashioned out of resin, so the artisan can custom make your favourite station for $30. 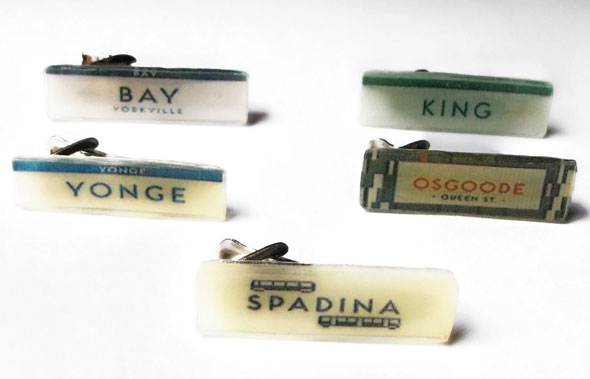