Funds raised from a transit tax and road tolls (yeah, we're spending it already) could pay for a revised version of the Downtown Relief Line if Councillor James Pasternak gets his way. The traditional route of the fabled DRL involves an east-west lake shore line that connects with Dundas West and Pape stations. Pasternak's version runs from Union to Pape only but extends the Sheppard line west to Downsview, something pro-subway councillors might back. The "Downtown" part of the name is also gone - perhaps in an attempt to appease the Fords - replaced by "North York."

The Emerald Ash Borer, a little green Asian insect, is evil and needs to be stopped. You see, the EAB likes to eat the bark of ash trees, a lot. Without intervention, the City of Toronto estimates the hungry little creeps could kill all 860,000 of the city's ash trees by 2017. These bugs aren't the only threat to our canopy, reports the National Post: diseases spreading from overseas are threatening oak and black walnut trees too.

City workers making more than $200,000 a year should take a 2-year pay freeze says Toronto's budget chief, Mike Del Grande. According to Del Grande, the high earners, who include police chief Bill Blair and TTC GM Andy Byford, are entitled beyond their needs. What does Mike make, again?

Now the mayor has defeated all graffiti, he's turning his attention to the other major issue on citizen's minds - yep, potholes! Rob Ford is heading up to Highway 27 and Humber College Boulevard today to unveil the broken blacktop function of the city's 311 mobile app.

This week in slime, a Toronto woman has been charged with defrauding a Holocaust survivor's fund.

If you've got any 2012 loonies or toonies in your pocket you might want to hand them over to a human instead of a machine for the next few months. Gwyn Thomas, president of the Toronto Parking Authority, says meters across the city need to be recalibrated to accept the new, lighter coins - a process scheduled to wrap up in the summer. Great organization and timing.

The giant Ed Mirvish Theatre sign has been on a trip to Ajax recently for refurbishment and a slight re-adjustment to the lettering. The Grid tagged along and found out what it takes to give such a famous landmark a new lease of life.

Guess the intersection goes old school this week - can you guess where this is? 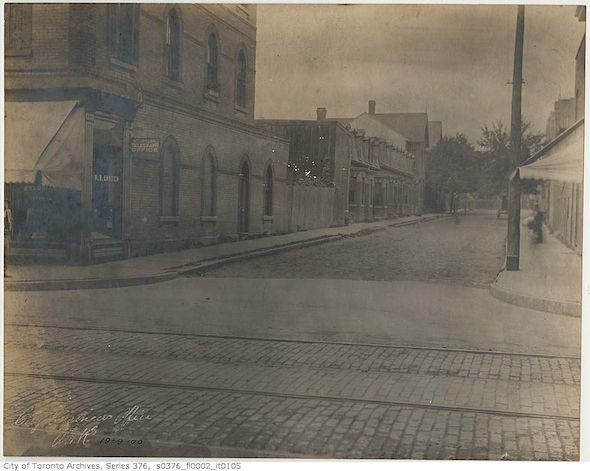