Kensington Brewing Company is where to buy and drink beer brewed right in the heart of Kensington Market. It all started out over five years ago with their smash hit Augusta Ale launched in the back of the now shuttered Burger Bar.

VP of Operations Michael Gurr built the brewery in another newly redeveloped space, taking on head brewer Johnny Briggs of Boshkung and assistant brewer Wes Bartlett of Beyond the Pale. You won’t find their signature Augusta Ale here, but you will find many other accessible but experimental craft beers in bottles and on tap. 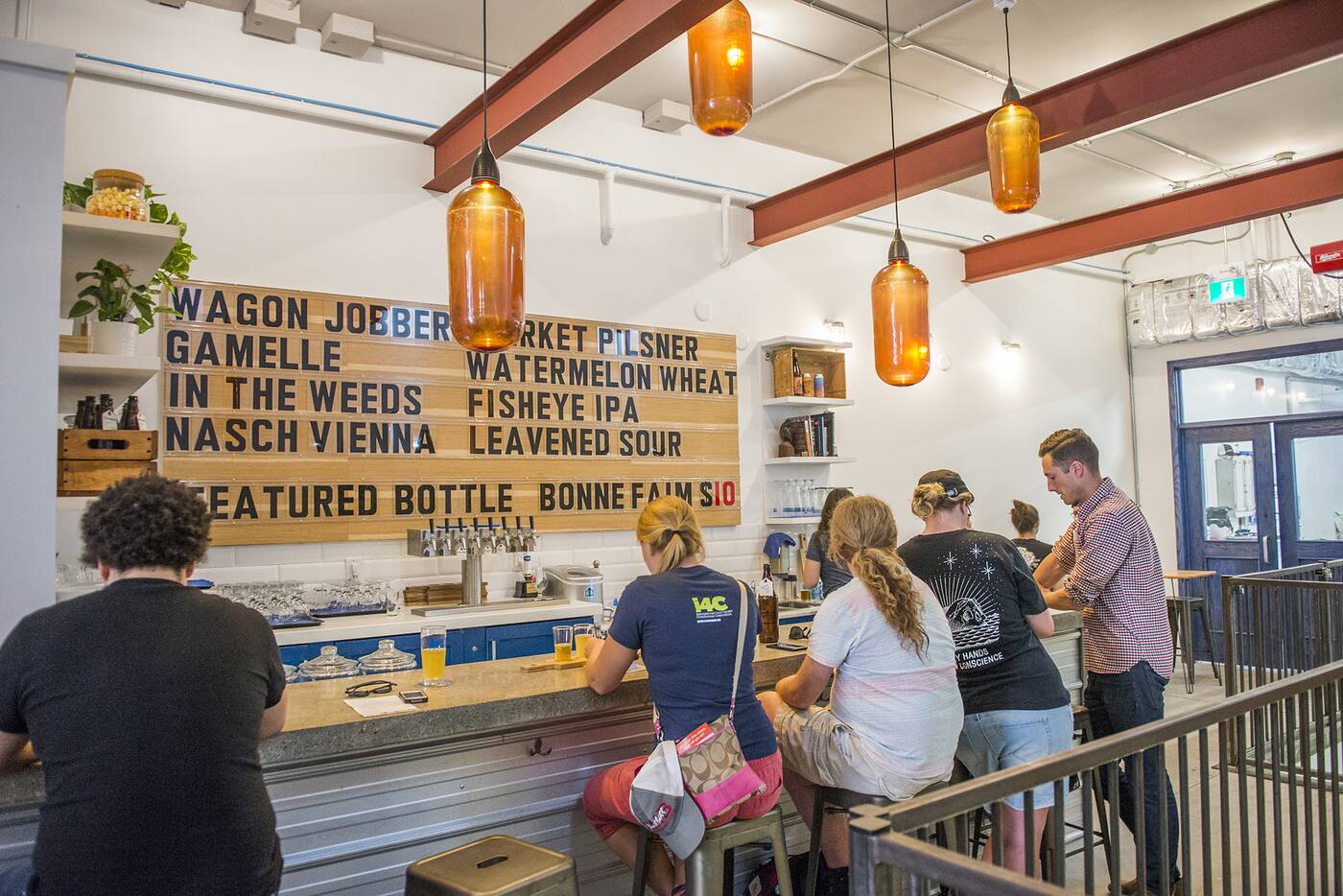 The space is obviously industrial with the brewing equipment ingeniously housed beneath the bottle shop and bar in a stacked fashion. 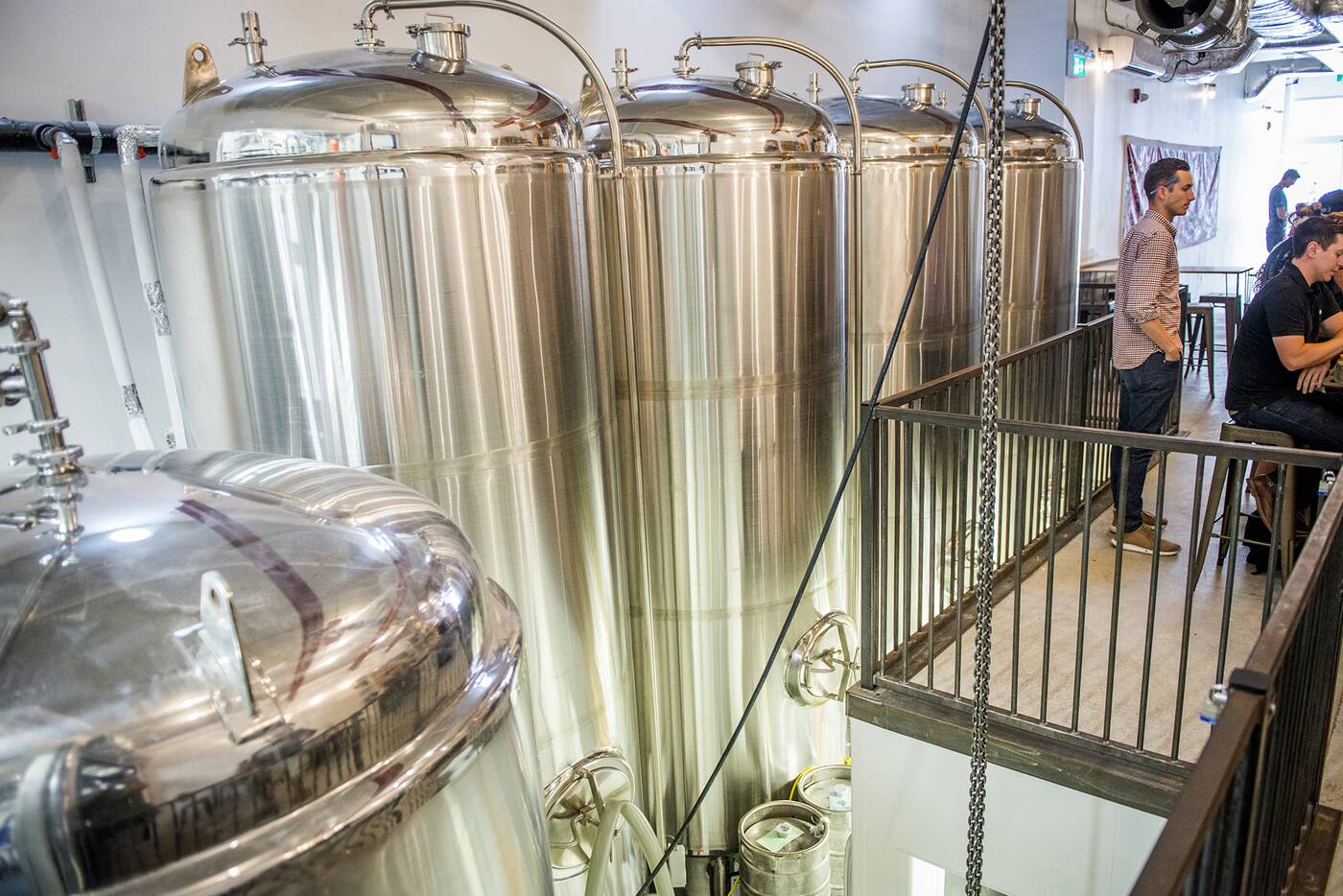 This is the only subterranean brewing space in the city like this. 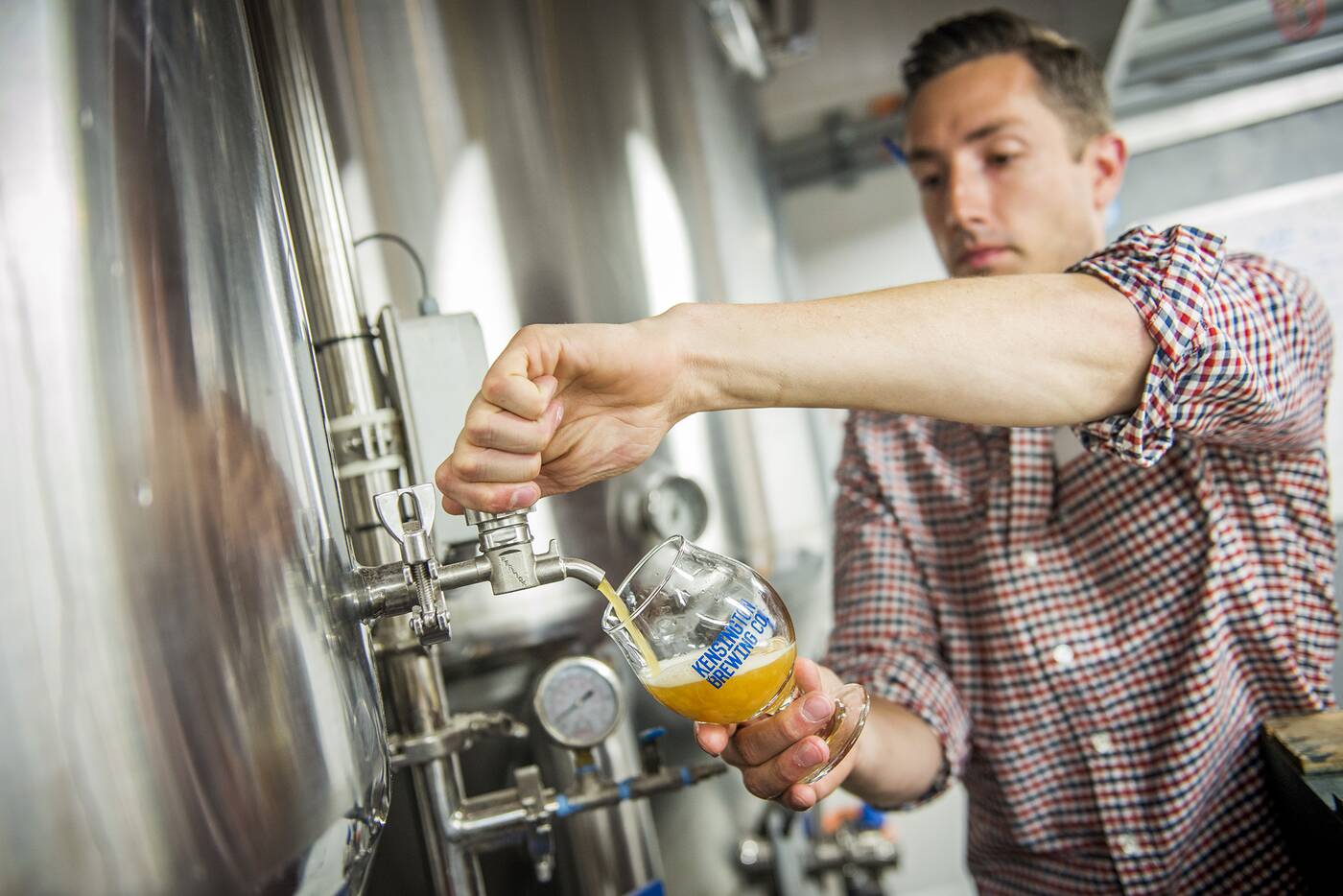 Five tanks are capable of producing 260 kegs, which is about thirty thousand pints. 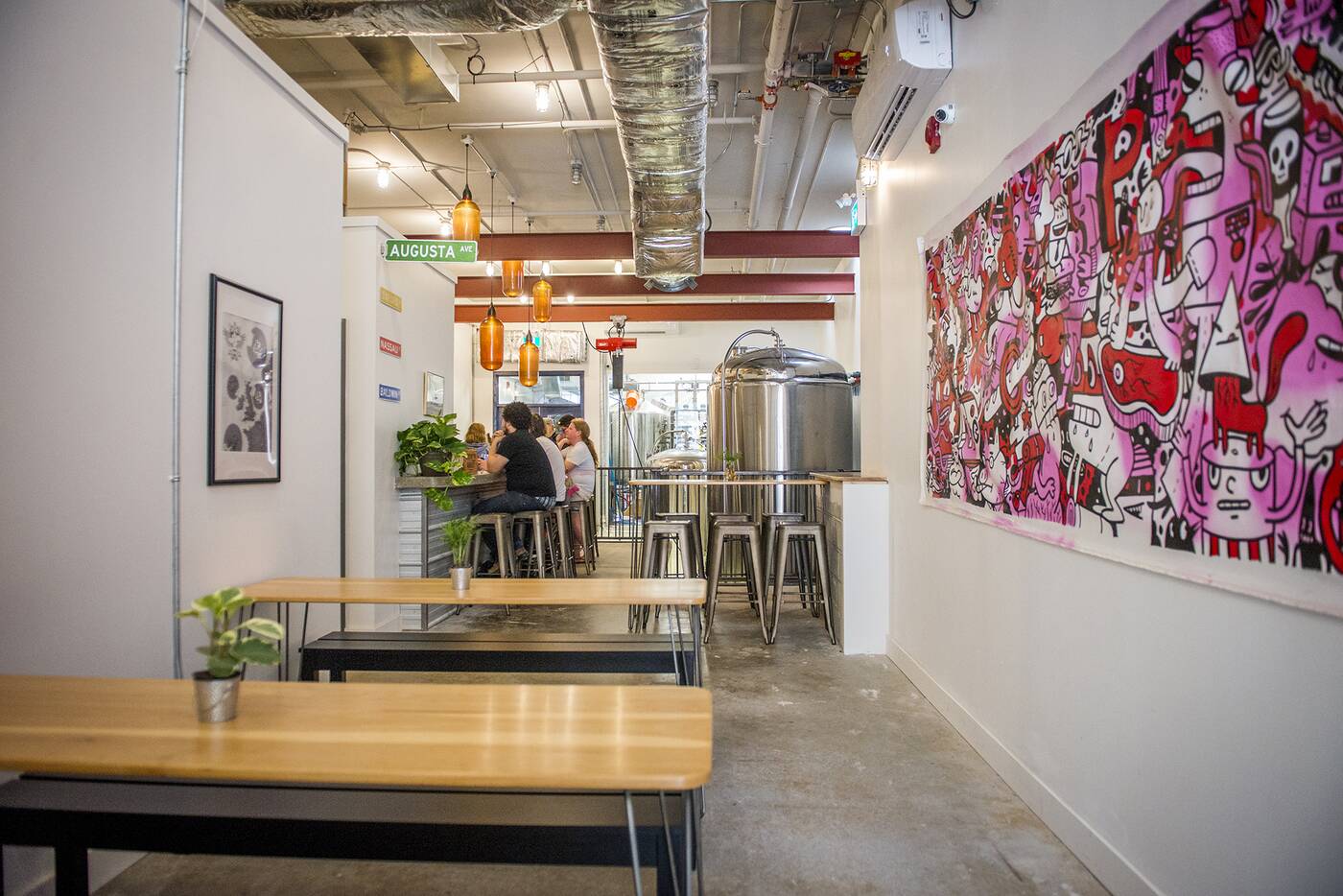 Trio Magnus lent a huge, wacky piece to the bar in lieu of a more permanent mural. 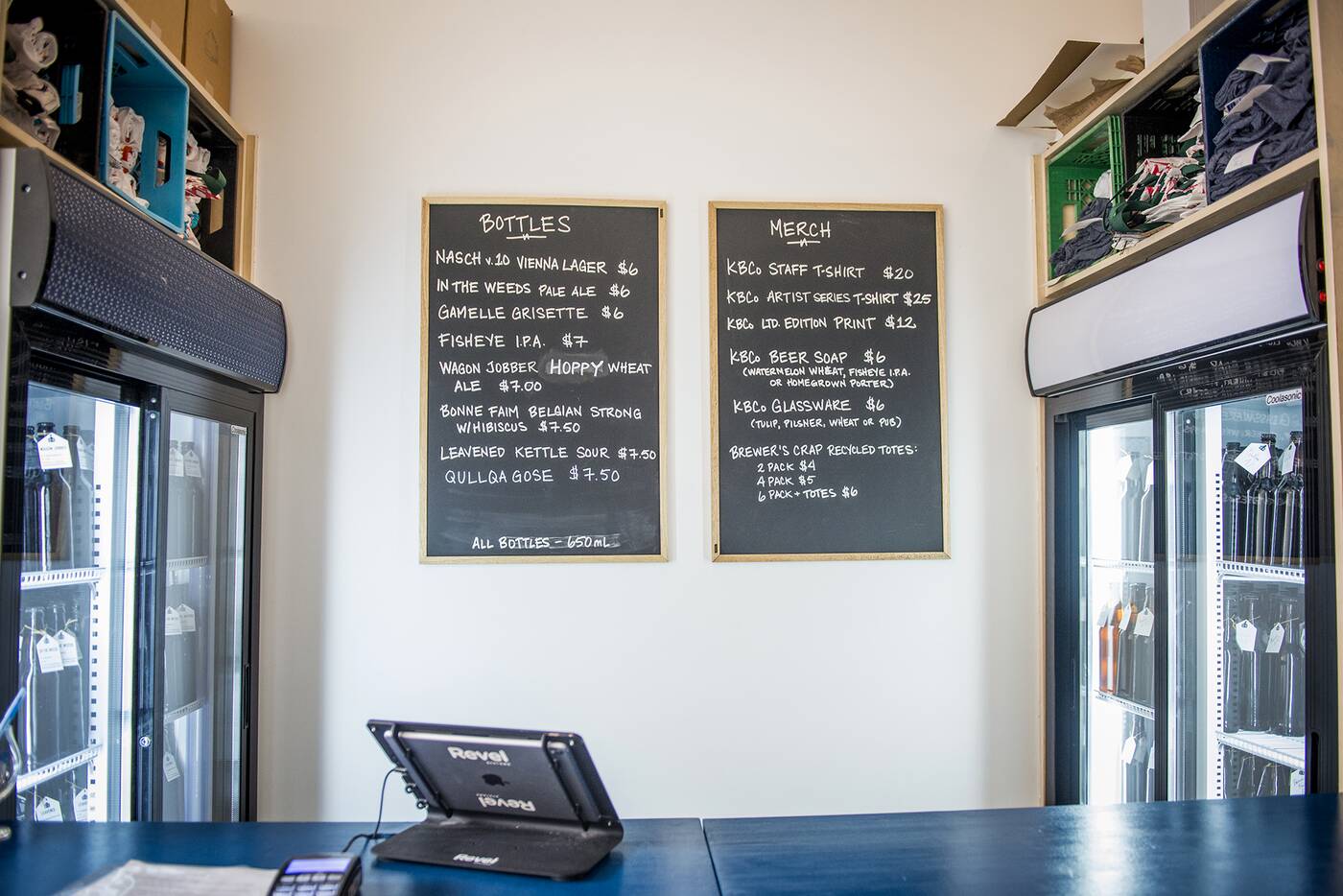 A small bottle shop area is adorned with two fridges and a display of various glassware ($6) as well as prints produced at nearby Kid Icarus ($12) and tees ($25) designed by a local artist. 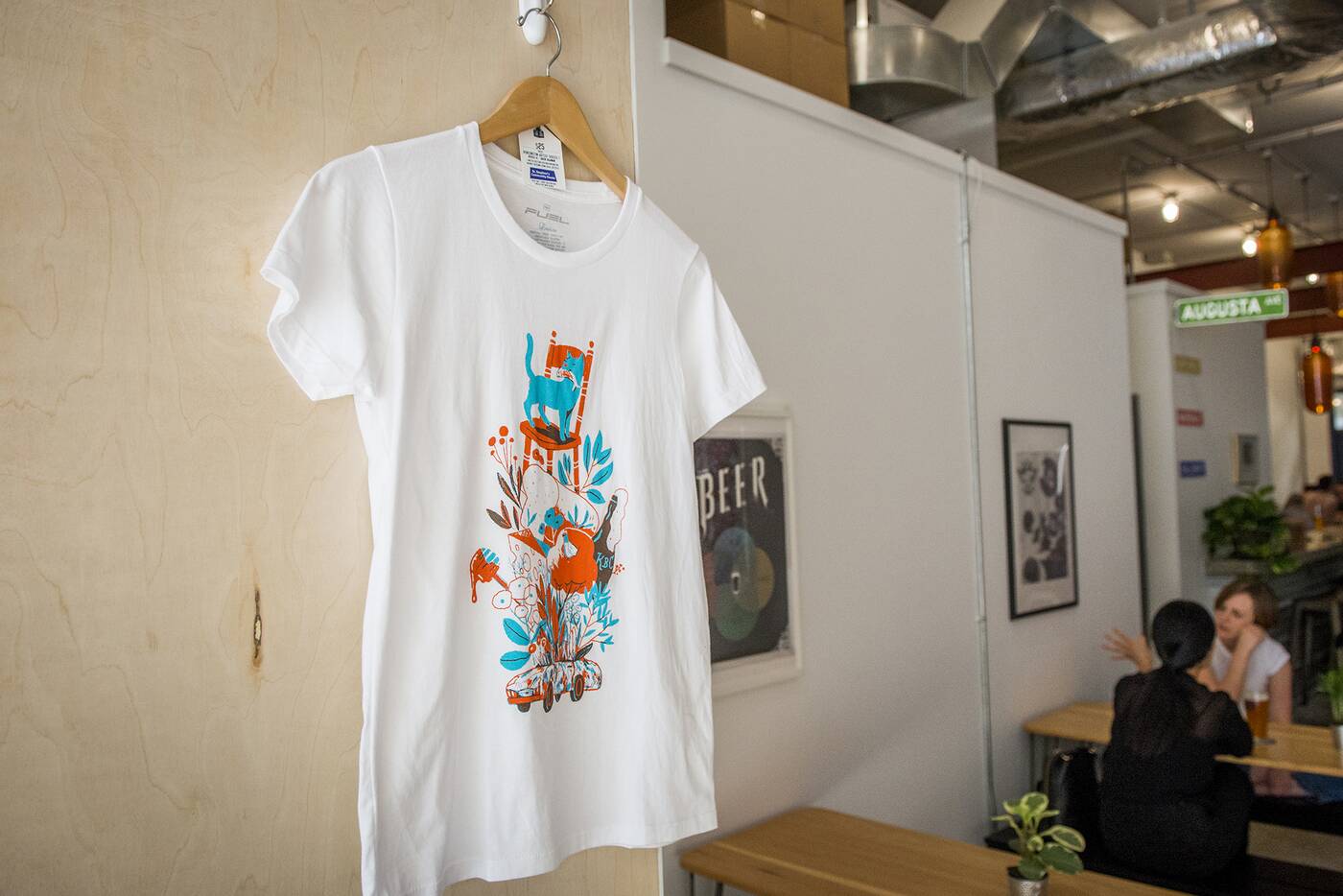 Drew Shannon is the first in a series where an artist creates a design themed around food and beer. 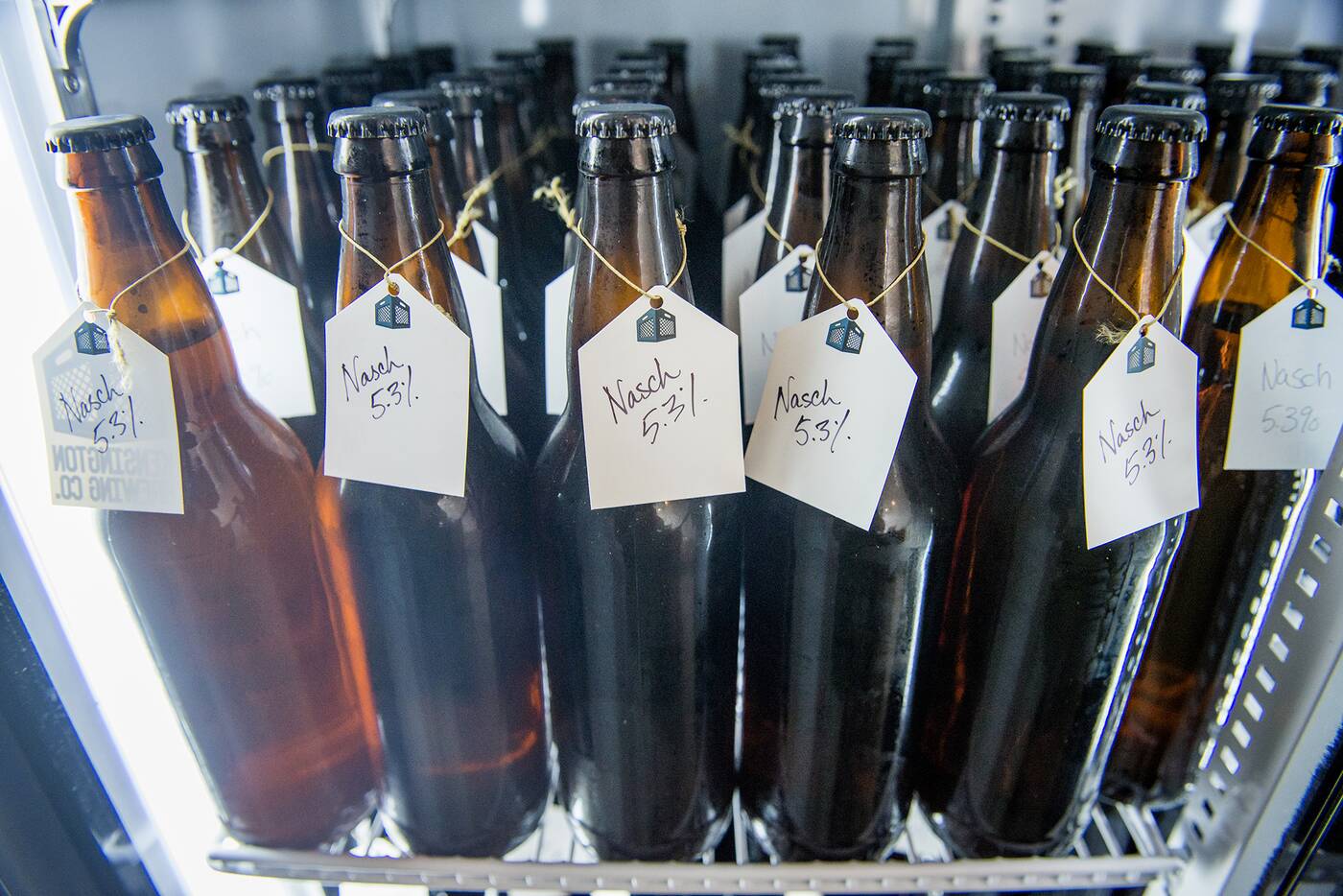 650 mL bottles of six of the eight beers on tap plus a feature bottle range in price from $6 - $7.50. Some are affixed with labels that suggest snacks like, say, honey BBQ peanuts and chorizo for their In The Weeds west coast IPA. 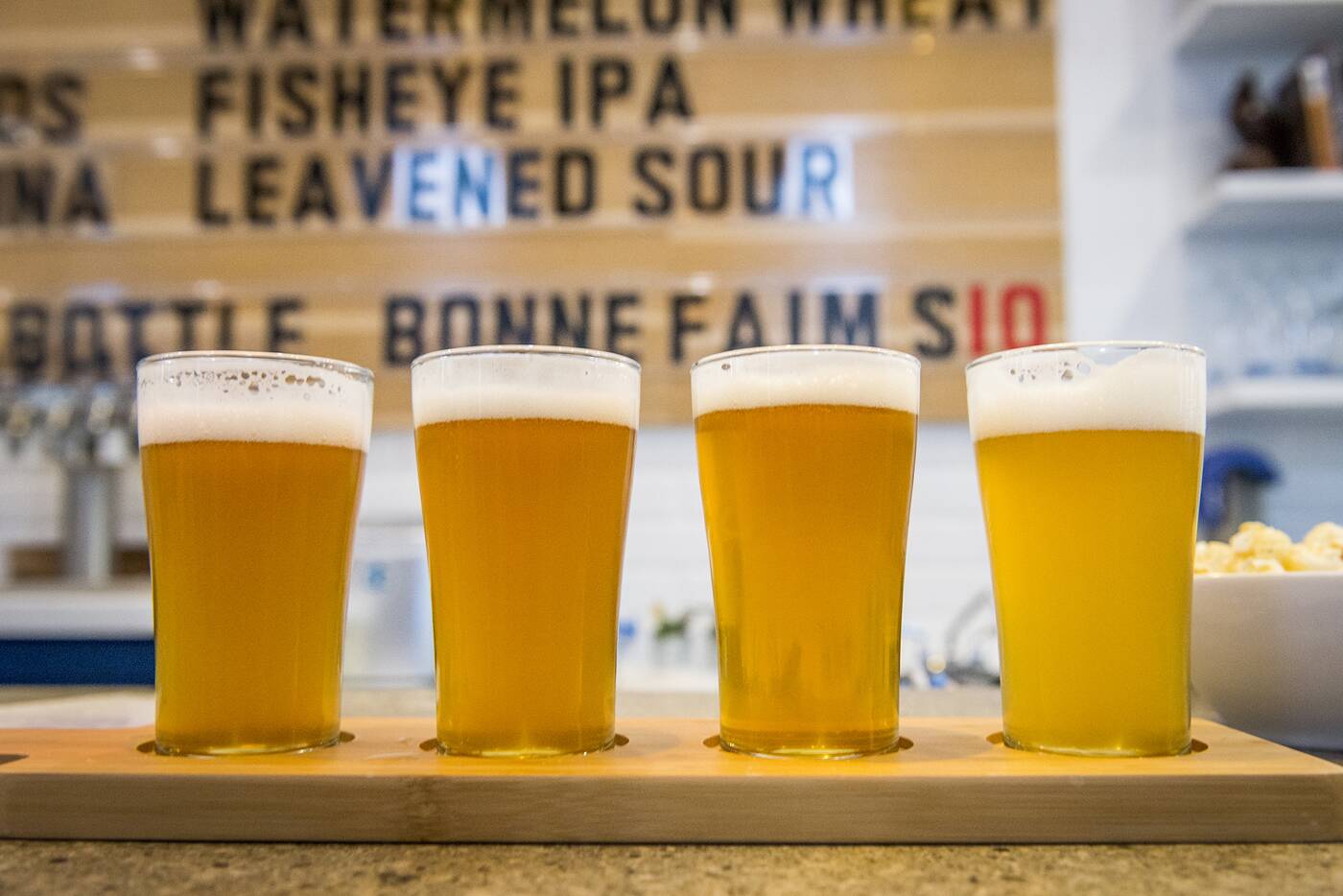 A flight ($8.50) allows you to sample four of the beers brewed onsite. You won’t find much that's unfamiliar here, with mostly yellowy or copper beers. Stouts or brown ales were still to come, the visible standout for the time being a lemony-coloured 4.6% Gamelle Grisette. 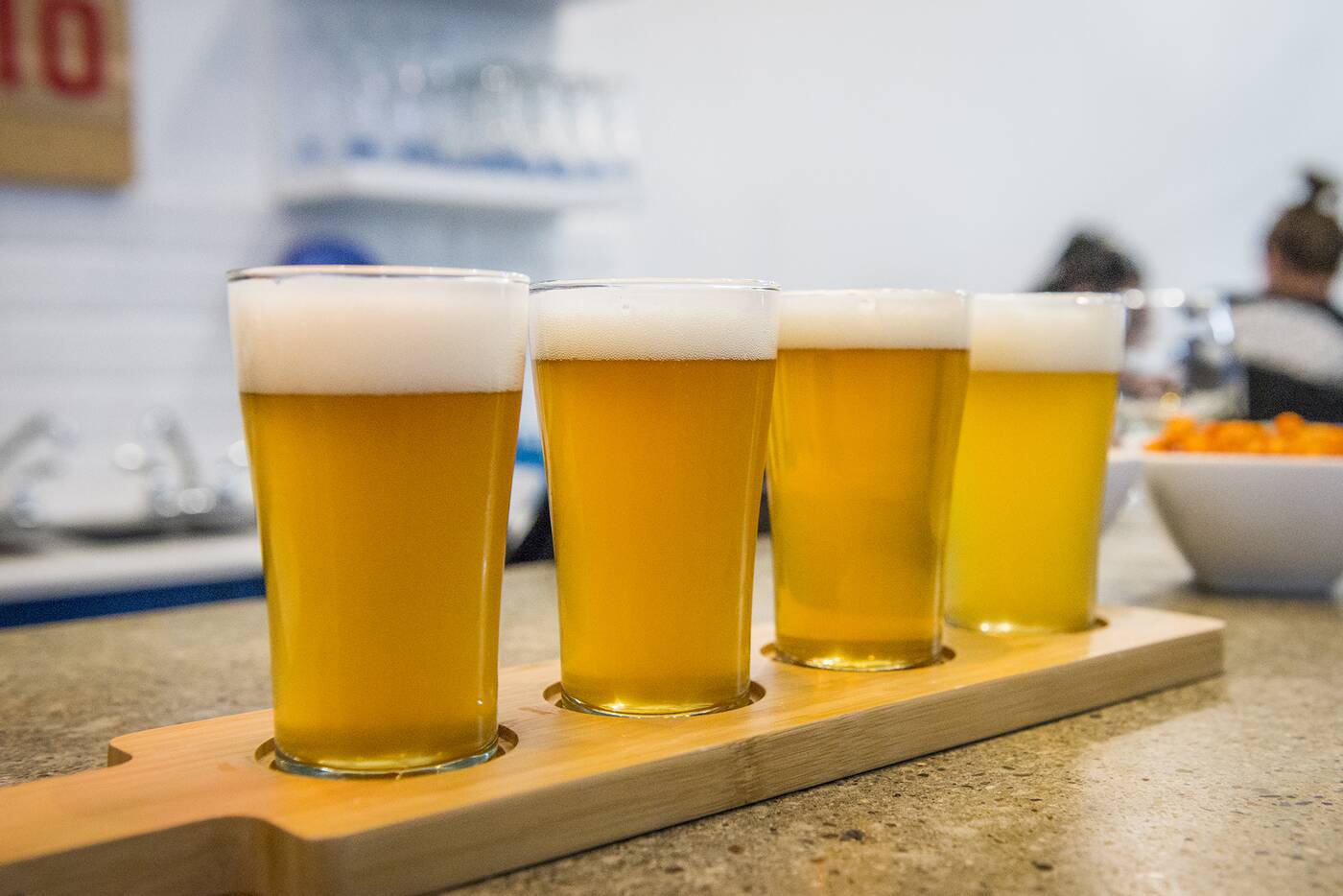 For our flight we try a piney Baldwin Fisheye IPA that clocks in at 6.5%, the In The Weeds ale, a 5.3% bready Nasch Vienna lager, and a fruity 5.4% Wagon Jobber American wheat. 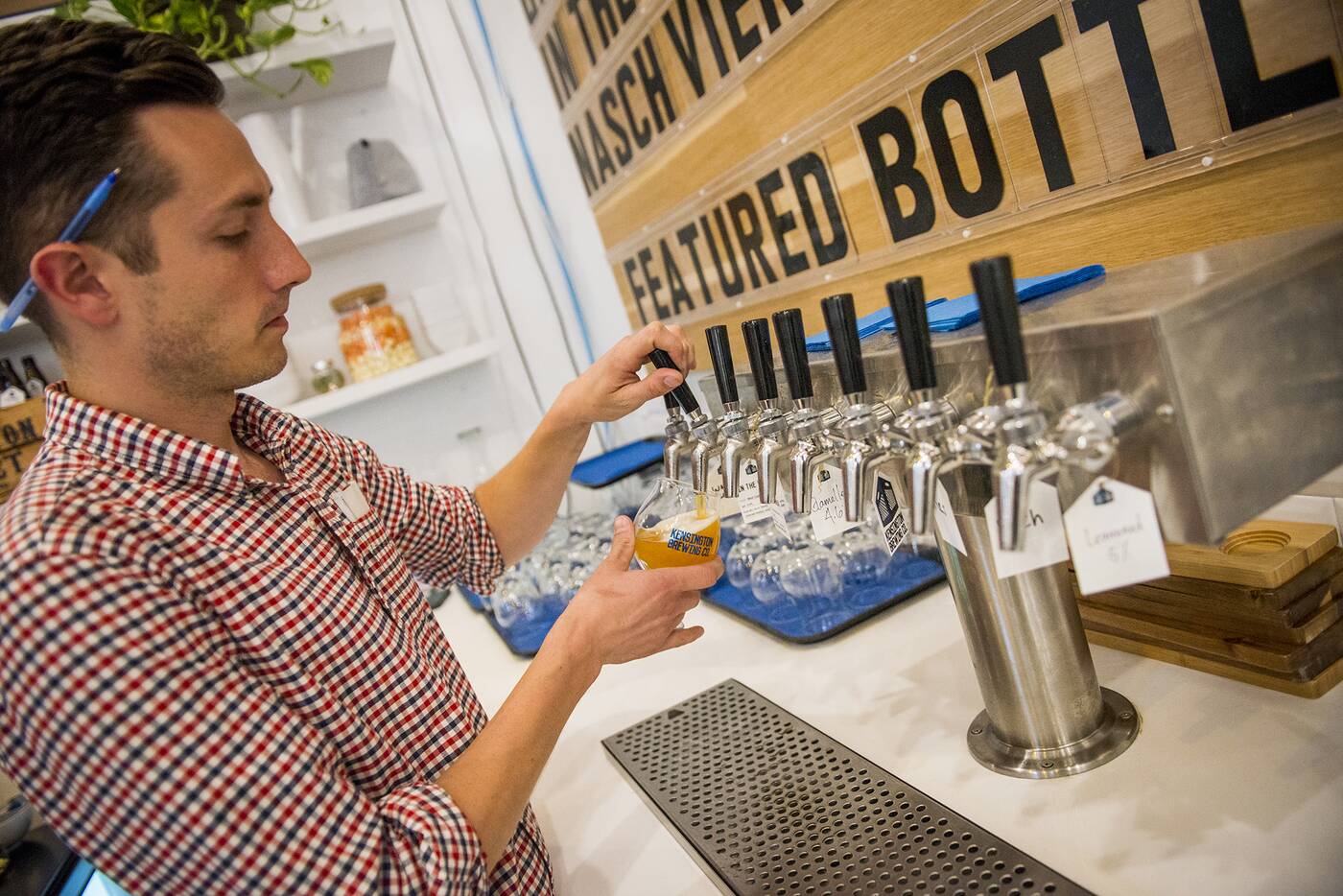 In The Weeds is balanced percentage-wise at 5.9%, one of the stronger offerings but still crushable with flavours of pine, orange, grass, and malt. 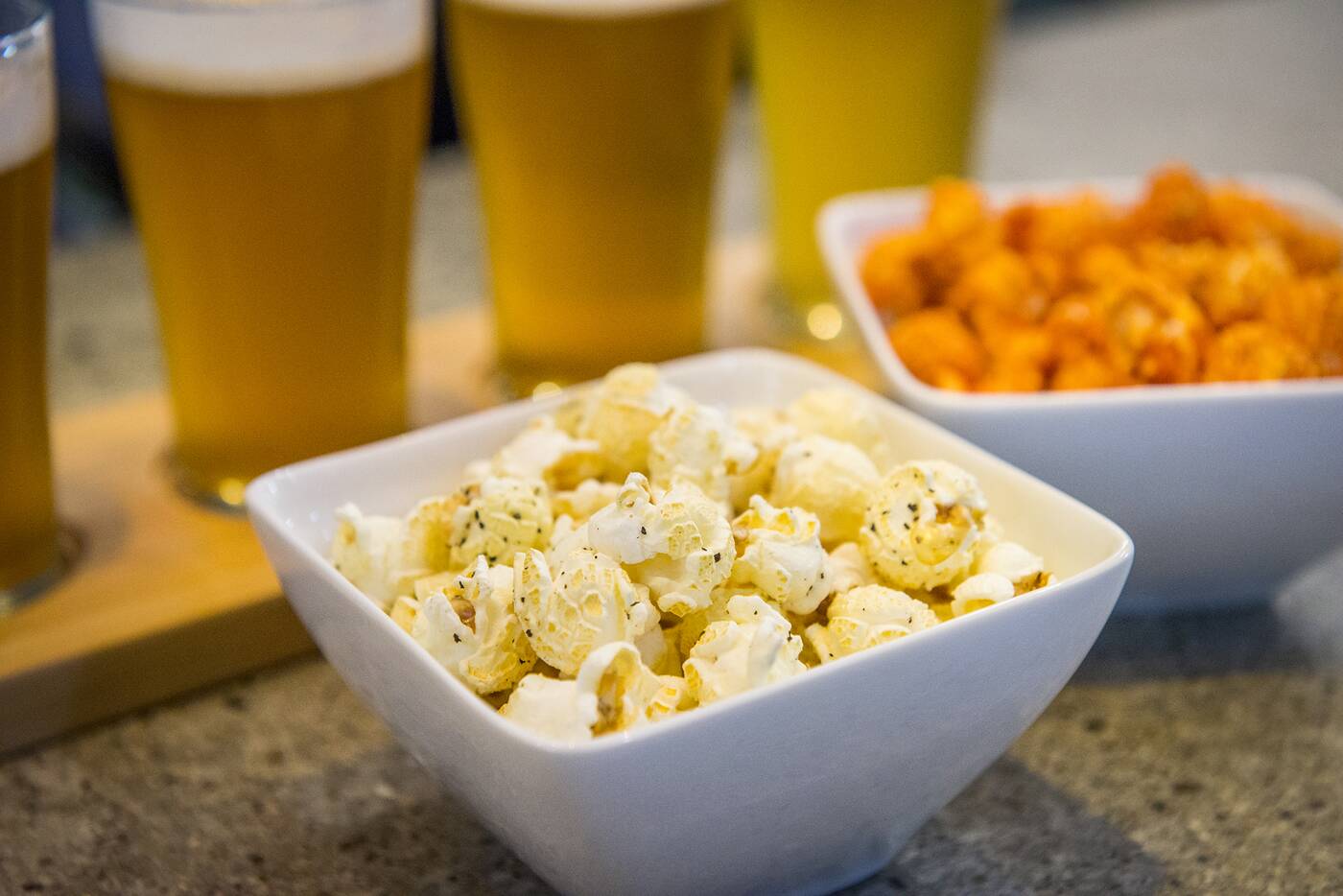 Bar snacks like popcorn ($4) are also obtained locally, from the Toronto Popcorn Company. Munchable gourmet flavours might include options like a spicy buffalo kick or salt and pepper. For other food options they’ll be featuring small pop-ups by neighbourhood projects like Chau. 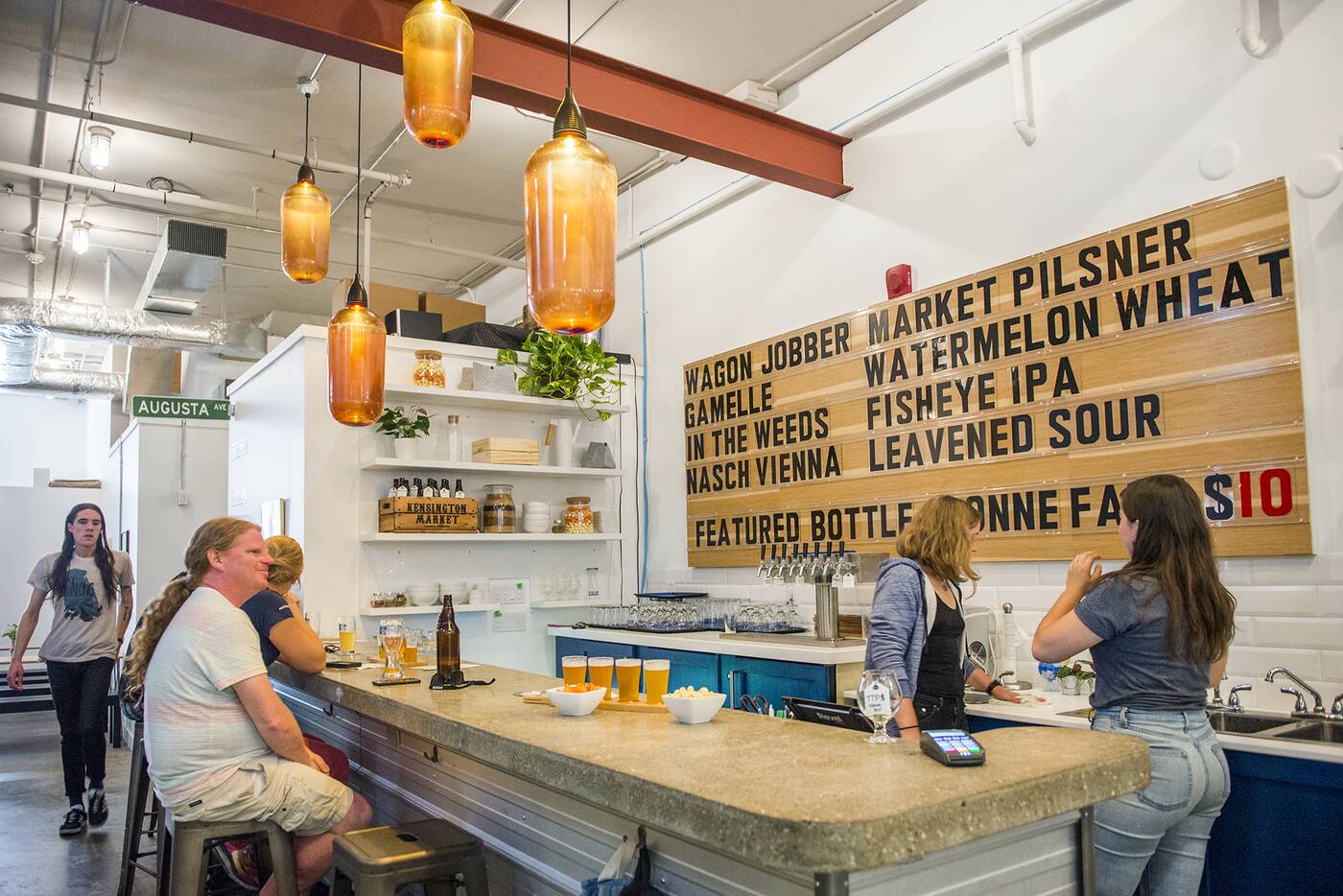 You can cozy up to the concrete bar and discuss which beer to try next, or sit at accessible tables at the front or high ones at the back. 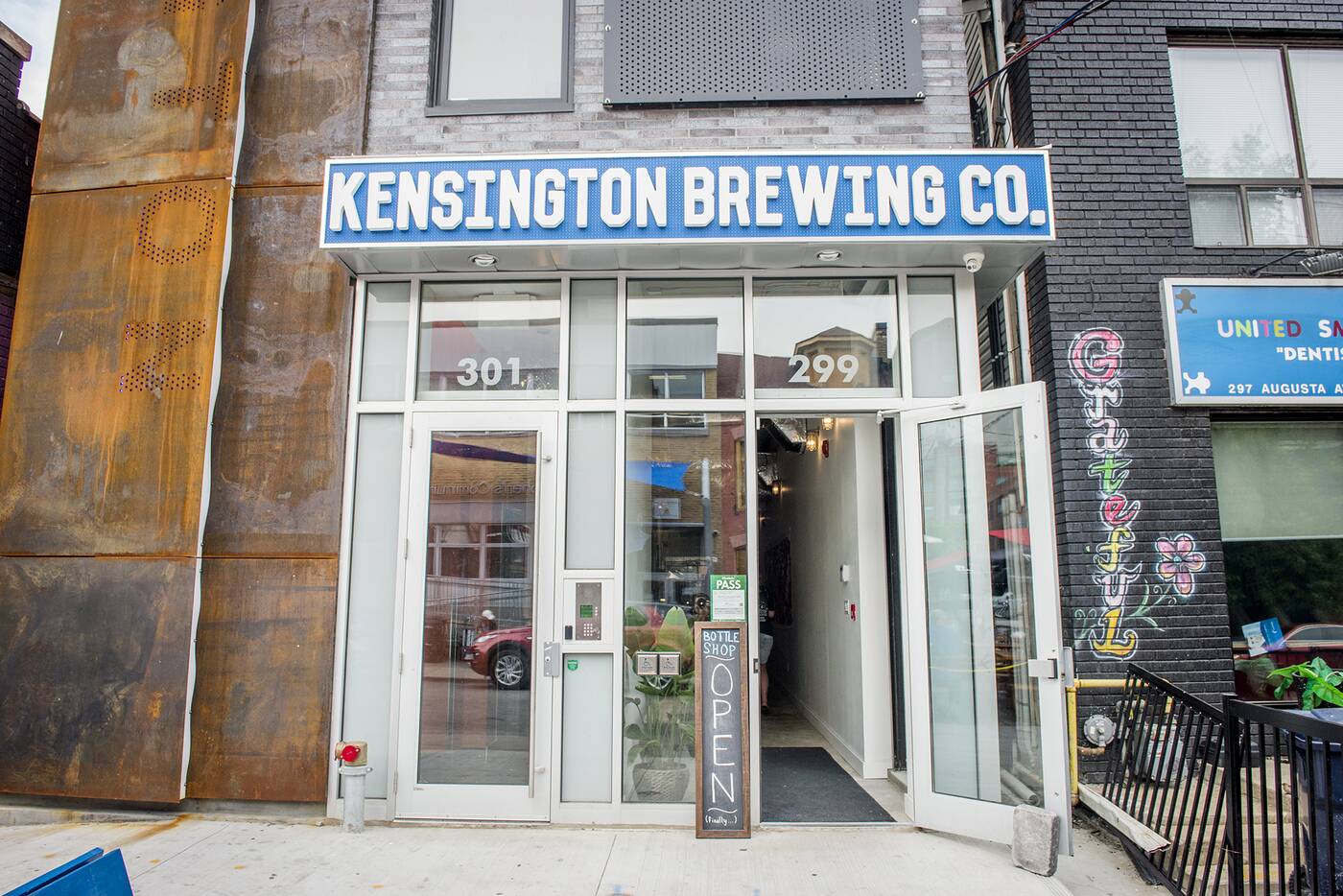