Hogtown Charcuterie recently opened in Kensington Market , and its clean, minimalistic design seems to be part of wave of revitalization for the grungy-and-grimey-in-places neighborhood. Long a staple at farmers' markets , owner and chef Pawel Grezlikowski wasn't planning to open up a dedicated shop just yet, but when the Market storefront became vacant, it required a drastic acceleration of his plans. 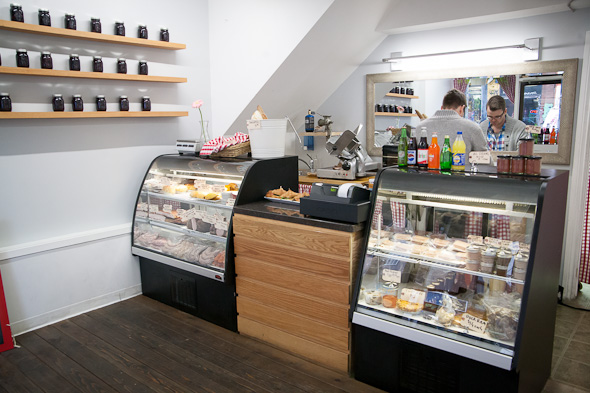 "I'm Polish," he tells me, "and the shop is meant to be a new age Polish deli." His background is evident in everything from the wall of simple shelves holding mason jars filled with pickled beets ($7), to his extensive work with sausages, to the red gingham curtains made by his parents for the shop. The "new age" part comes through in the off-white walls, clean layout, and well-lit interior. 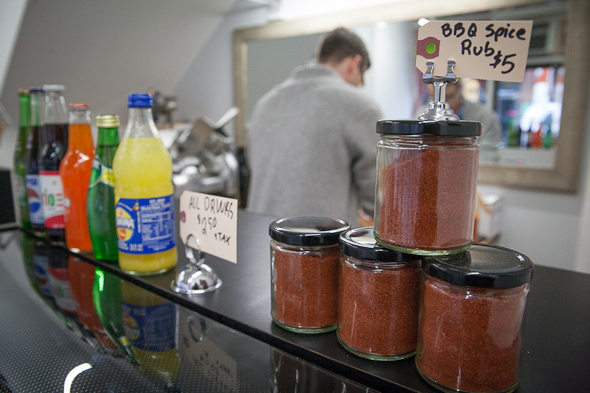 I've often wondered about how people fall into certain professions, and develop certain passions, and Grezlikowski's story is about as unexpected as they come. Having studied political science, and finding his corporate job too dry, he returned to an old childhood passion for working with meats. "When my Mom was pregnant with me, she was making sausages," Grezlikowski says, and he'd been experimenting with methods of smoking and making sausages throughout his life. 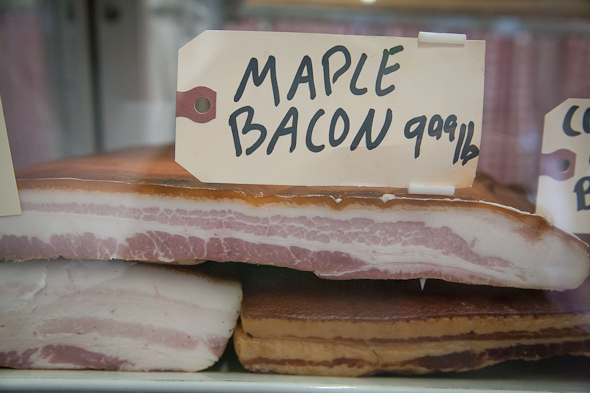 "We focus more on Eastern European and German-style deli, like smoked meats," Grezlikowski says. Unusual flavours abound, like the jalapeno bourbon sausage ($15/lb), the thuringer with hazelnuts and currants ($15/lb), or the kimchi sausage ($9.99/lb). He also has a shelf devoted to bacon that's cherry-smoked, country-cured or infused with maple. 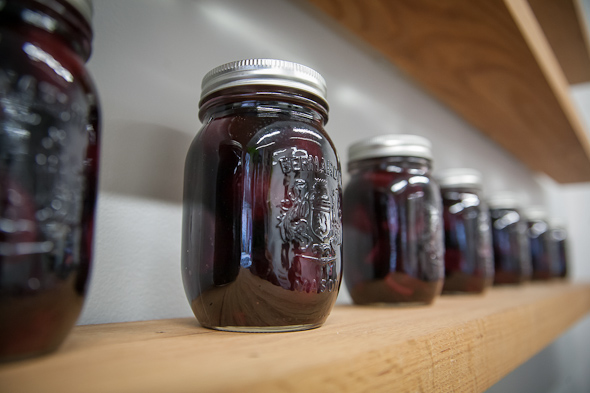 Everything is made in an off-site kitchen, with animals obtained from a Mennonite abattoir in St. Jacob. Grezlikowski is a fan of nose-to-tail, and every part of the animal is somehow incorporated into the artisanal products that make it into the store. 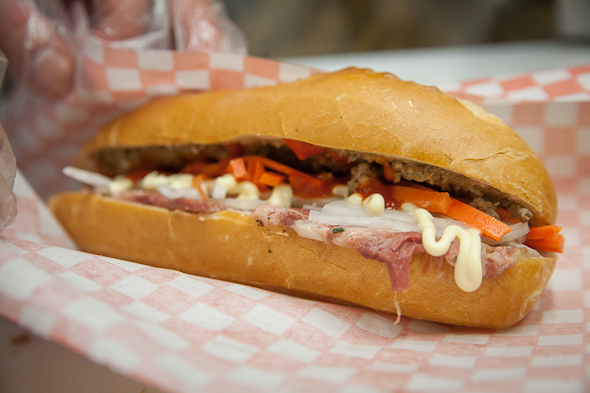 He's also dabbling with the grab 'n' go potential of the shop, by introducing jalapeno cheddar bacon rolls ($3), croissant sandwiches, and housemade Jamaican beef patties ($3.50). His patties are made without fillers, well-spiced with ginger, cumin and allspice, and the same pastry crust found throughout the shop--the secret to the latter is lots and lots of lard. There's also the shop's resident sandwich--a banh mi ($6)--that sees cilantro, QP Japanese mayo, head cheese, pate, and veggies pickled in rice vinegar come together for a truly marvellous sandwich. 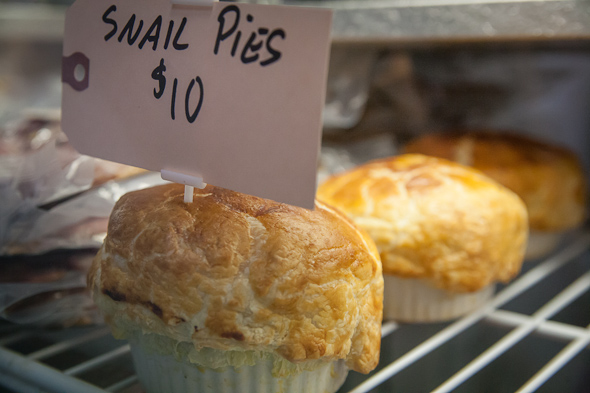 You'll also find snail pies ($10)--that same lard-filled crust cradling rich escargot--pork, duck, rabbit and smoked salmon rilette, a variety of pates (including pork liver $7), and terrines such as the venison with cherries and pine nuts $9). Then, there's the bacon jam ($10), which he advertises on a sandwich board outside and freely offers up as samples. It's incredibly rich (I immediately start imagining it as a Christmas morning snack), and not particularly sweet, despite the mix of bourbon, maple syrup, balsamic vinegar, and spices that go into it. 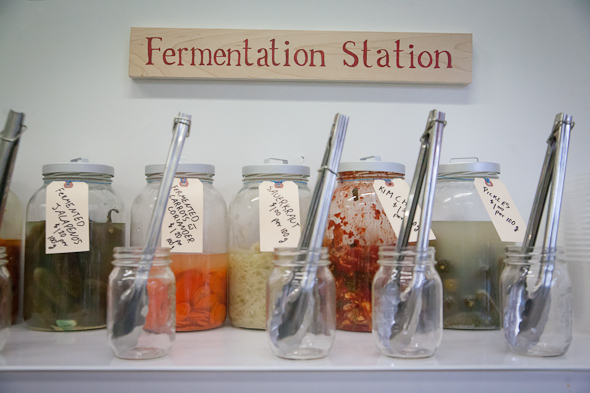 The shop offers a "fermentation station," which sees veggies such as kimchi ($1.20/100g), sauerkraut ($1/100g), carrots in coriander ($1.20/100g) and jalapenos ($1.20/100g) fermented in the old, snail's-pace way. Rather than using vinegars, Grezlikowski jars the veggies in salt, spices and water and lets bacteria do their thing, which lends unique, layered flavors. Enjoy them with the shop's modest bread offerings, which come from Thuet bakery. 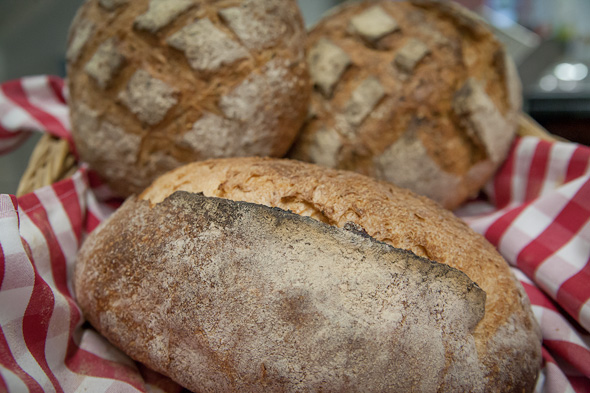 "We aim to have a staff that's really knowledgeable, and to be able to tell you the story behind how everything's made; I make everything myself." As for what's coming up for Hogtown Charcuterie? "Lots of tourtieres," he says, to add to his savoury duck ($22), traditional Christmas ($20) and Montreal style ($12) pies. 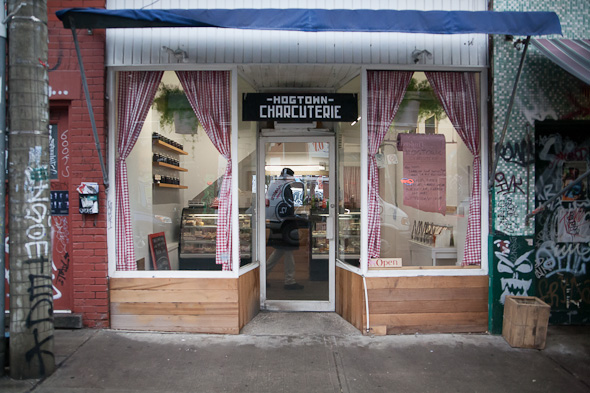 In keeping with its name (and the renewed passion for meat and charcuterie in the city), Grezlikowski has no plans to expand into cheeses or fish (although I'd love to see what he could do with salted cod, for example).