Bill's Lobster has been in business for over 10 years at Gerrard and Broadview in the heart of East Chinatown. The north-facing fish shop is simply laid out, with tanks of lobsters in front, a fish counter in the centre and some more exotic fare at the back. Beyond fresh fish and seafood on ice, Bill also sells imported goods like soba noodles, miso powder, dried seaweed and a selection of frozen goods including King Crab legs and pre-cooked shrimp.

With stories of tilapia masquerading as white tuna , and Atlantic halibut ( considered endangered ) being sold under the label of B.C. halibut, it's no wonder that consumers are having a hard time knowing how and where to buy their fish. And contrary to what you might think, it isn't just big grocery chains that are guilty of mislabeling and misidentifying goods; restaurants and small producers are doing it too. 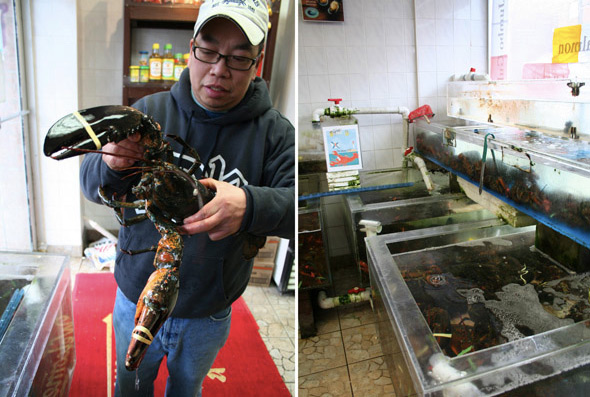 Upon meeting him, what I admire most about Bill is his passion and knowledge of the industry. He always has the findings of a report to share and has direct relationships with the fishermen that supply his store.

Using regular salmon as an example, Bill quizzes me on what I think I should be looking for when picking a piece out. My first answer is correct -- smell is far and away the best way to tell if your fish is fresh. Fresh fish should not smell fishy. But my second answer -- colour -- isn't quite so accurate. Bill reveals that farm-raised salmon, commonly found at grocery stores, is fed varying types of meal that enhance their colour. To my horror, he produces a colour palette not unlike one found at a paint store, which is distributed by a company that sells fish meal. 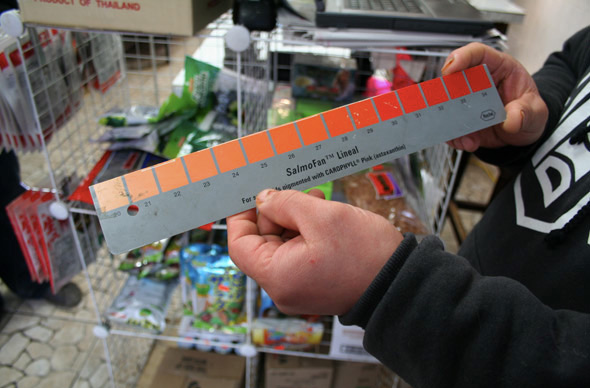 Fish farmers can select the colour they want their salmon to be, ranging from a pale rose to an orange that's unnaturally psychedelic. Bill advises that consumers ought to spend the extra money on purchasing wild or organic salmon. He sells organic salmon from Ireland or Scotland at $19/pound and wild Pacific salmon at $17/pound. At the start of the salmon season in May, he'll also carry wild spring salmon from British Columbia. 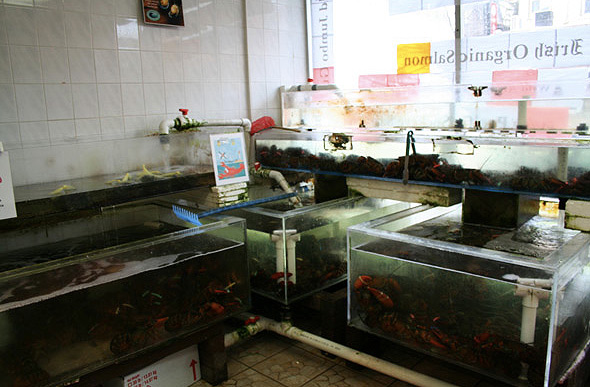 Come lobster season in early May, Bill's lobster sells at $6/pound. Currently in the off-shore fishing season, they sell at $10/pound. Bill sources directly from Nova Scotia and tells me that he gets the lobster directly from the fishermen, eliminating the need for wholesalers. I ask to see the biggest lobster in the tank, and he brings out a 16 pound sucker that gives him a hard time coming out of the tank. He notes that the turnaround time for lobster in his store is no more than two to three days. 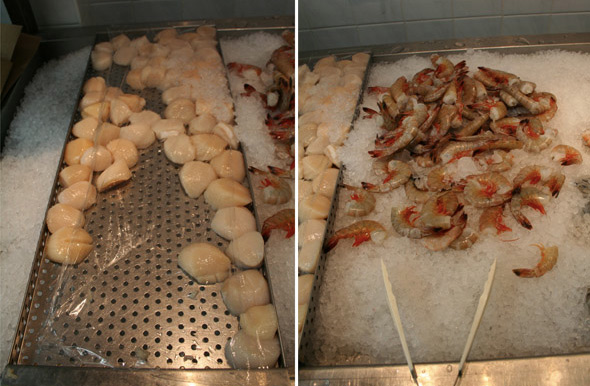 Continuing on down the narrow room, Bill pauses at the tray of scallops on ice and teaches me another industry trick. Treated scallops (referred to as "wet" scallops), typically found at supermarkets or in frozen form, are soaked in preservatives, meaning that the meat absorbs more fluid, which makes them larger and thus more expensive per pound. When cooked, the excess water evaporates, leaving a shrunken, dry and often tasteless scallop.

On the other hand, wild scallops are considered "dry" -- meaning they are not treated with any chemicals and are harvested directly from the ocean and often frozen immediately to preserve their freshness. Bill sources his jumbo scallops from Digby, Nova Scotia. They sell at $17/pound (where about eight pieces constitute a pound). 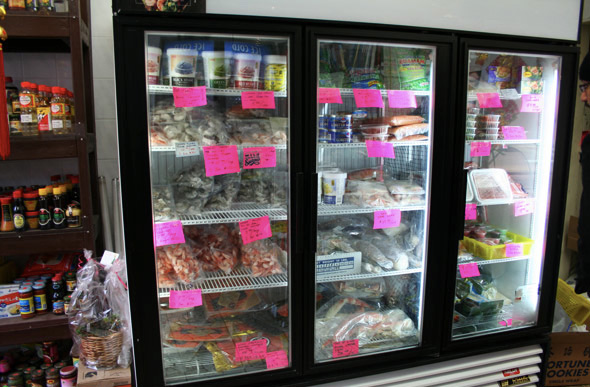 Jumbo tiger shrimp from Florida sell at $14/pound, while choice-grade oysters from P.E.I. sell at $1.50 a piece. I glance over at my date who is occupied with taking a picture of a lobster with his iPhone and silently consider the aphrodisiac properties of oysters. I carefully consider buying two to slurp right then and there, but decide that taking him to a fishmonger on a Saturday afternoon is probably sexy enough...

Bill's last lesson is about sushi-grade fish, which he advises is a dangerous game if not played correctly. Fish sold to be eaten raw must be stored, frozen, defrosted and prepared very carefully. Bill sells sushi-grade tuna and salmon and says that he gives his customers careful instructions when they purchase these products. Depending on the season, he will also carry a variety of fish including Atlantic Halibut, Alaskan Black Cod, Arctic Char, Greenland Halibut, Wild Pacific Snapper, and some more exotic varieties including Branzino from Spain and Turbot from France.

In a murky world of unethical fish practices, it's important to have a fishmonger that you can trust and who will give you sound advice and tips on how best to prepare, store and chose your selections. With over 10 years of business, you could do worse than Bill's Lobster. 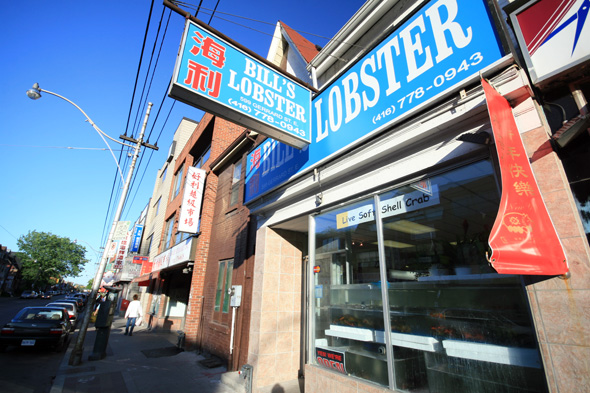