One Toronto woman is learning the hard way that it's really not a good time to share a surname with Amber Heard right now — or to have the exact same name as the actress's sister.

Toronto-based photographer Whitney Heard continues to be unfortunately mistaken for the sister of the star who is known best these days for her ongoing defamation trial with ex-husband Johnny Depp.

"This started in 2017 when I used to receive fan mail for Amber Heard, but within the past week or so it has turned into hate mail," the Toronto Heard says. "I've been getting an overwhelming amount of spam emails, DMs comments and even phone calls  — I had to turn off my work phone!"

While having the social media handle @whitneyheard has been beneficial for her brand in the past, it's now proving to be somewhat of a curse as the trial continues to be fodder for international headlines, social media chatter, memes and an outpouring of problematic hate for and jokes about Amber Heard.

People appear to really want to give the Torontonian a piece of their mind about the disgraced star — who she has to continually clarify is not her sister. 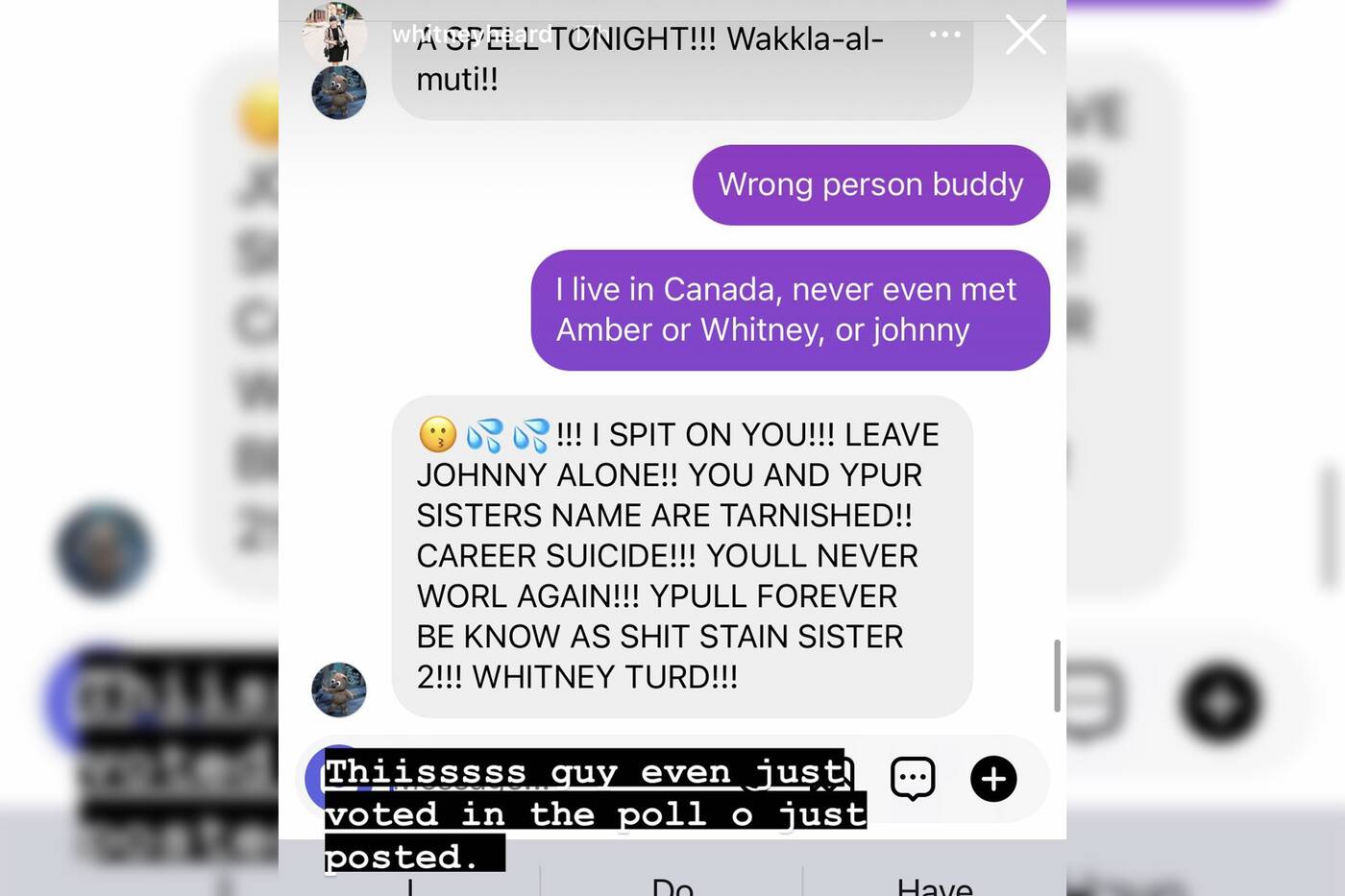 The Toronto wedding photographer has been sharing some of the DMs she's received on her Instagram stories to let her followers know she's not Amber Heard's sister.

"I don't even have a sister..." she's had to reiterate to people. "I live in Canada, never even met Amber or Whitney, or Johnny."

She's posted on more than one occasion that she also hasn't even been following the court case and even added in her bio that she's not related to the celebrity, but still, the attacks persist.

Despite the explanations, many either don't believe her or find it suspicious that Amber's actual sister does follow her on Instagram — they've even chatted on the app, where the Toronto Whitney says they "shared a laugh" about the mistaken identity confusion years ago.

Along with the flurry of negative messages, emails and phone calls, she's faced non-stop tags had photos inundated with comments demanding justice for Johnny Depp, calling her "as bad of a liar as your sister," and more. 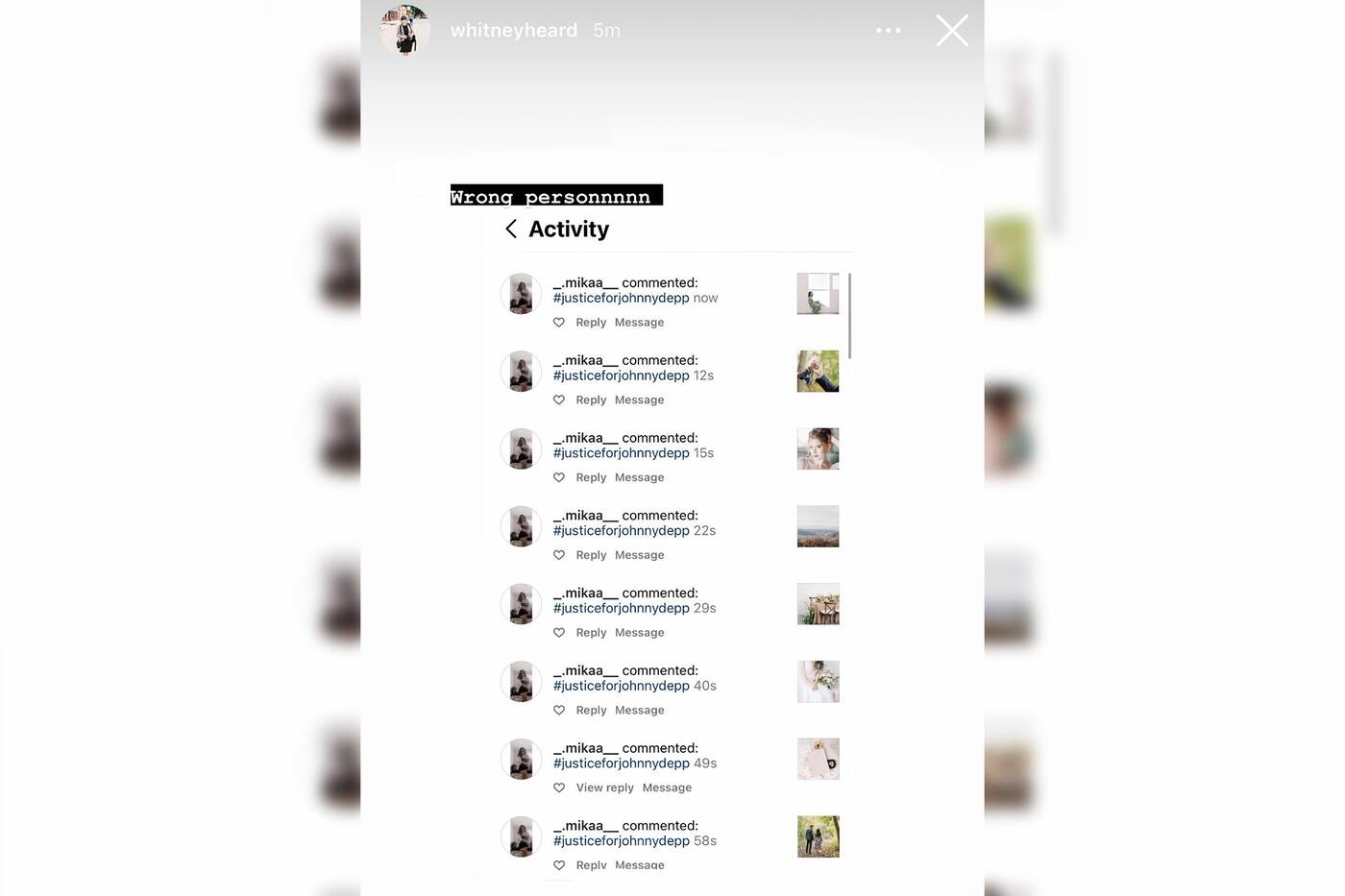 She's been overwhelmed with daily comments, messages and tags on the social media platform from people confusing her for the sister of the star.

Some who know her personally or just have the common sense to realize she is not that Whitney Heard have stepped up to defend her in the comments sections while also applauding her for dealing with the drama, which she's handled with humour, largely by sharing some of the more ridiculous rampages publicly on her Instagram stories.

"It's pretty comical, and the friends and followers that have been with me for years find it amusing," she says.

"Overall, I haven't let things get to me much. I try to laugh about the situation, and Whitney sent me a message to apologize and has been understanding about the whole mix-up." 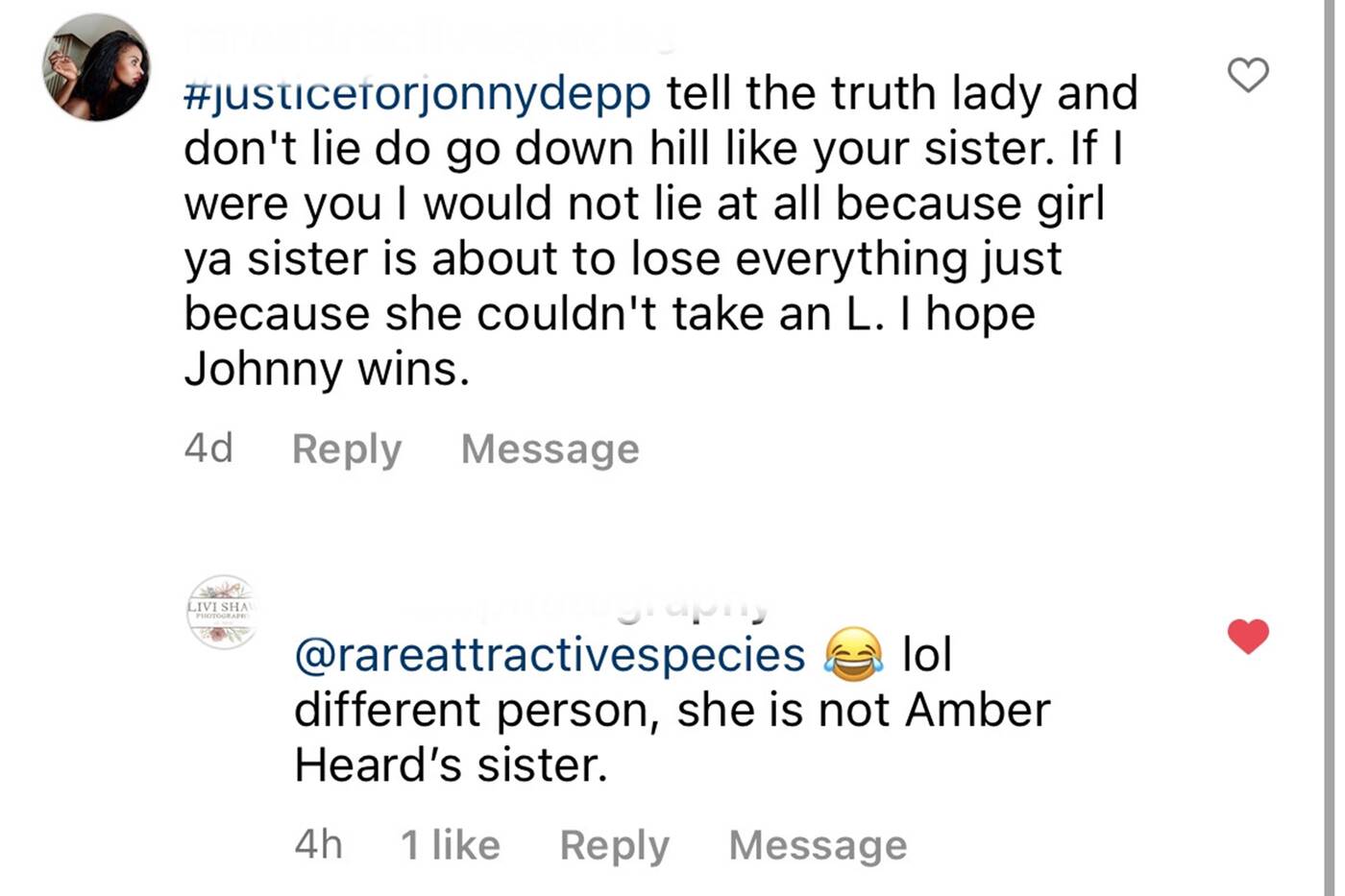 Some followers have joined Whitney in informing the misled haters that she's not actually who they think she is.

Even when things have gotten more heated, she's done her best to stay lighthearted and disconnected — from her socials, from her phone, and from the trial and its ensuing drama — for the sake of her own mental health and well-being.

"I can't currently answer the phone without being worried someone will start swearing at me, so I've decided to turn it off.... every time I look at my phone someone is trying to get a reaction out of 'Whitney,'" she says.

"A few lovely new followers have come from this mix-up and a bit more engagement but other than that, it's pretty much just a funny story!"