When someone mentions old-school Degrassi, do you think of Drake as Jimmy Brooks 20 years ago? Or perhaps Tessa Campanelli and the F Word heard ‘round the world 30 years ago (or even "going all the way" with Stephanie Kaye 35 years ago?).

Maybe if you are hardcore fan you will recall the true OG, "The Kids of Degrassi Street" in the early 1980s. And if you are old enough you might even remember seeing "Ida Makes a Movie," the short film that started it all, back in 1979. 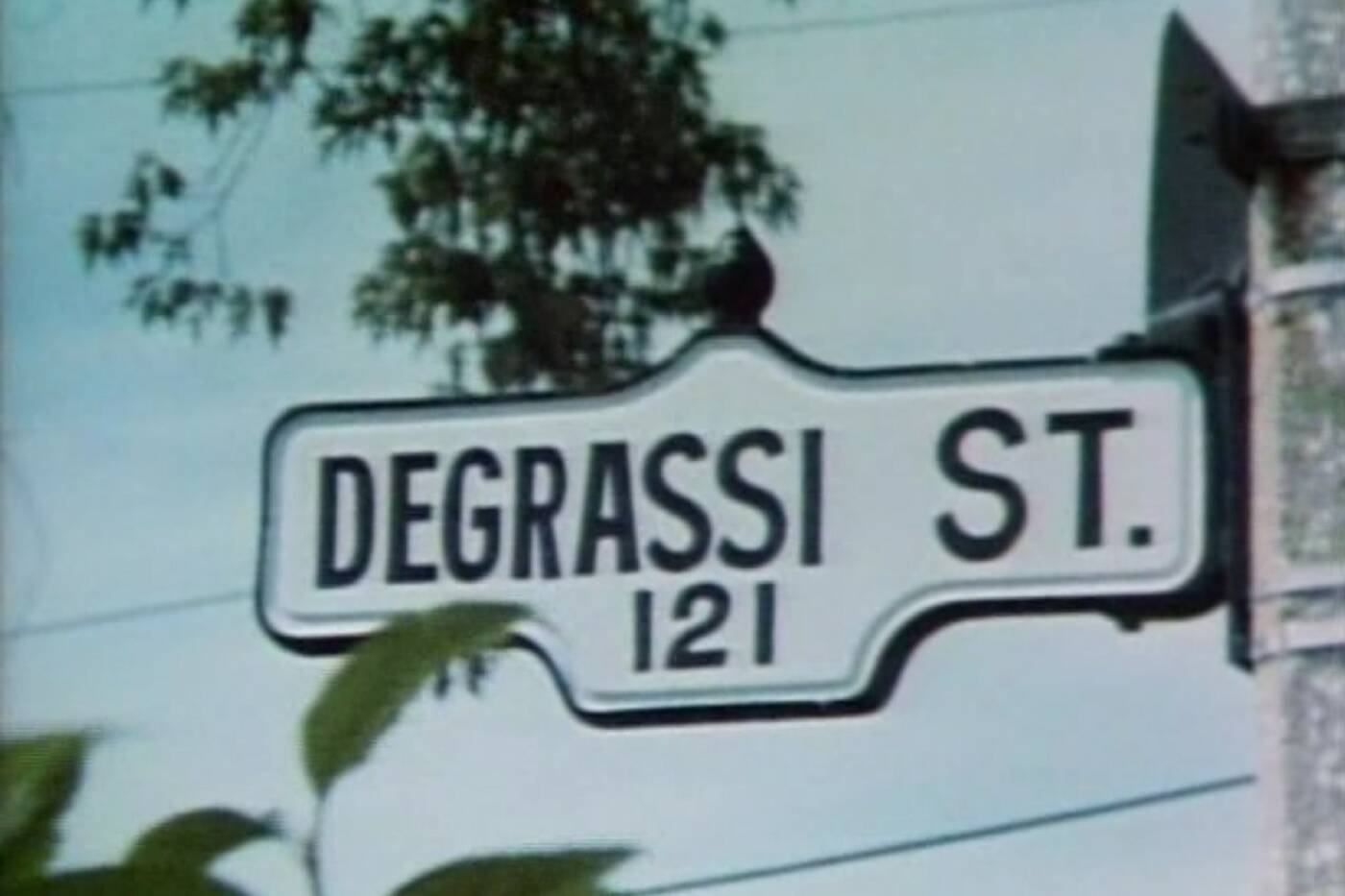 With speculation swirling about the next iteration of the Degrassi saga set to premiere on HBO Max next year, now is as good a time as any to revisit the slightly murky origins of the franchise that transformed a sleepy east end Toronto street into a global pop-culture phenomena. 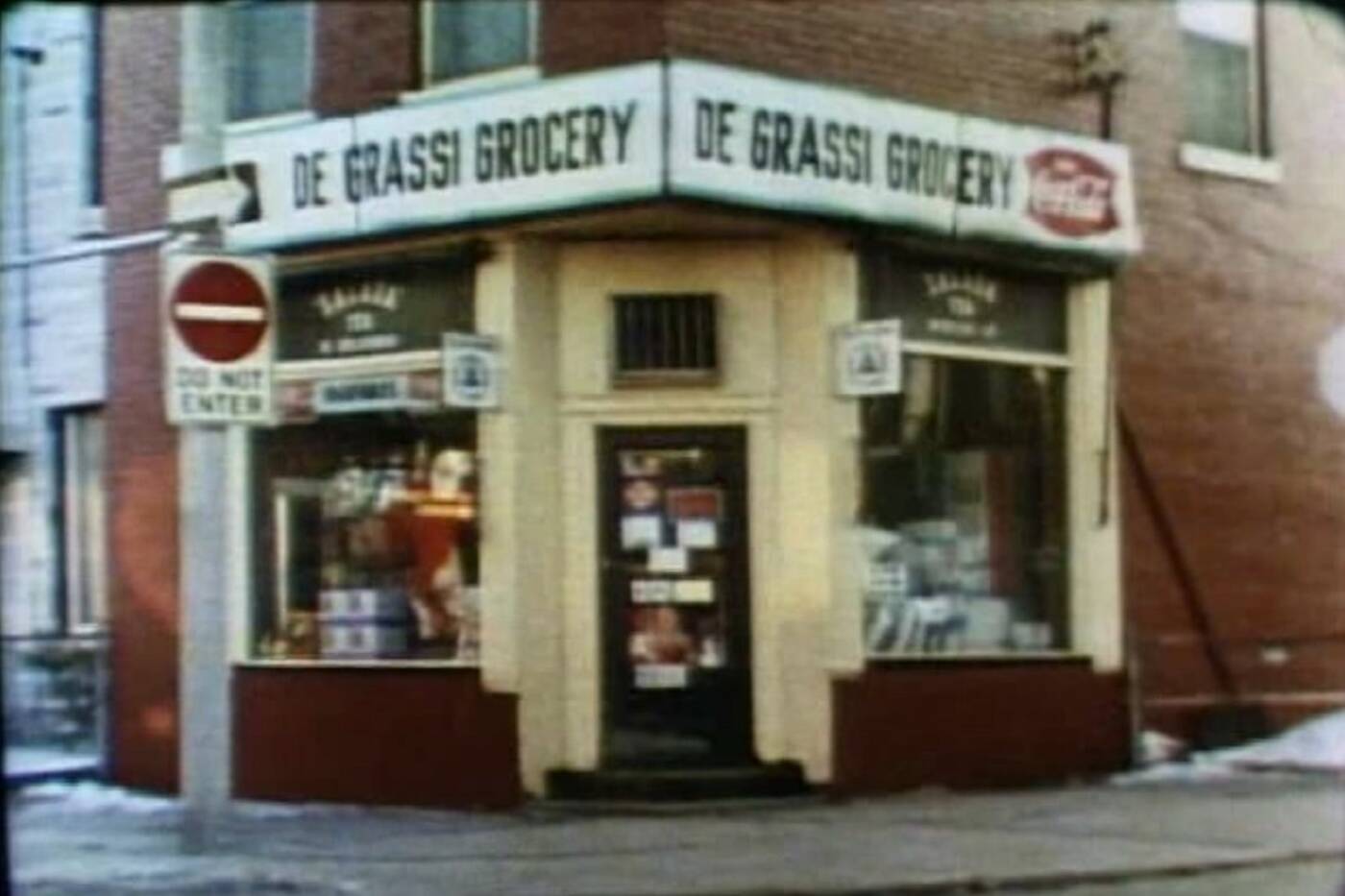 Creation store: Where it all began in the 1970s. Image courtesy of Retrontario.

Back in the mid-1970s at Earl Grey Senior Public School, teacher Linda Schuyler was instructing a very early, non-curriculum-based version of media studies to her students, including film-making on Super 8.

There was a lack of resource books on the subject so she asked the school's librarian Bruce Mackey to order a selection of titles that might aid in the student’s understanding of this emerging academic stream.

One of the titles Mackey ordered was the 1974 book Ida Makes a Movie by Kay Chorao.

Unknown to both at the time, Ida Makes a Movie was in fact an illustrated book for young children, featuring cats (Titular Ida was a kitten who wanted to make a movie). 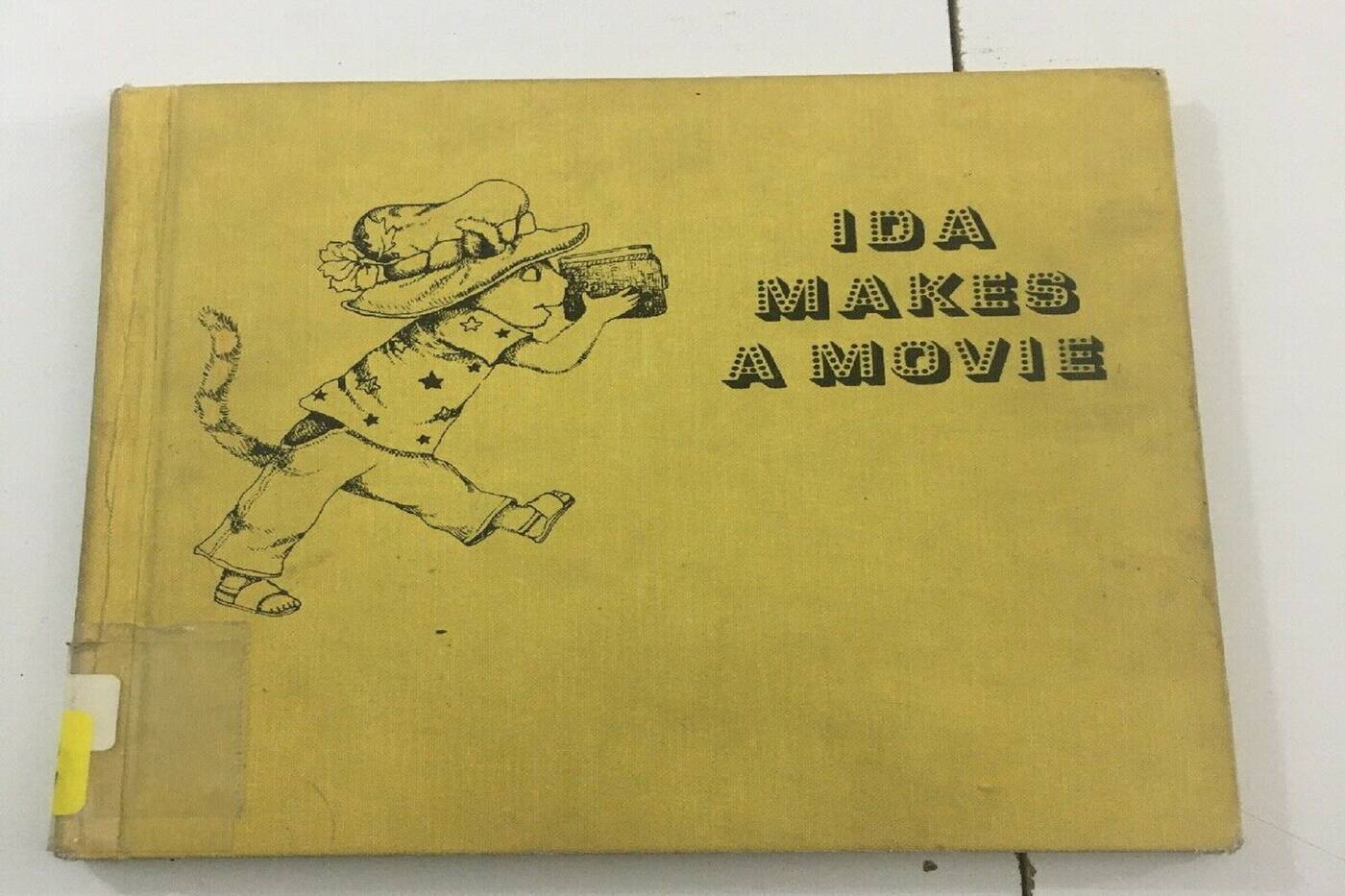 What's new pussycat? Ida Makes a Movie was infact a pre-school book about a young kitten who wanted to make a movie. Image courtesy of Retrontario.

Both Mackey and Schuyler felt the story was powerful, but mostly lost on the pre-school audience the book was aimed it.

They snapped up the rights and set about producing a live-action version featuring kids who were slightly older, that could be used in class as both a film making primer and an exercise in social studies.

Schuyler and close friend Christopher "Kit" Hood had created a production company entitled Playing with Time Inc. for some of Hood’s commercial work. 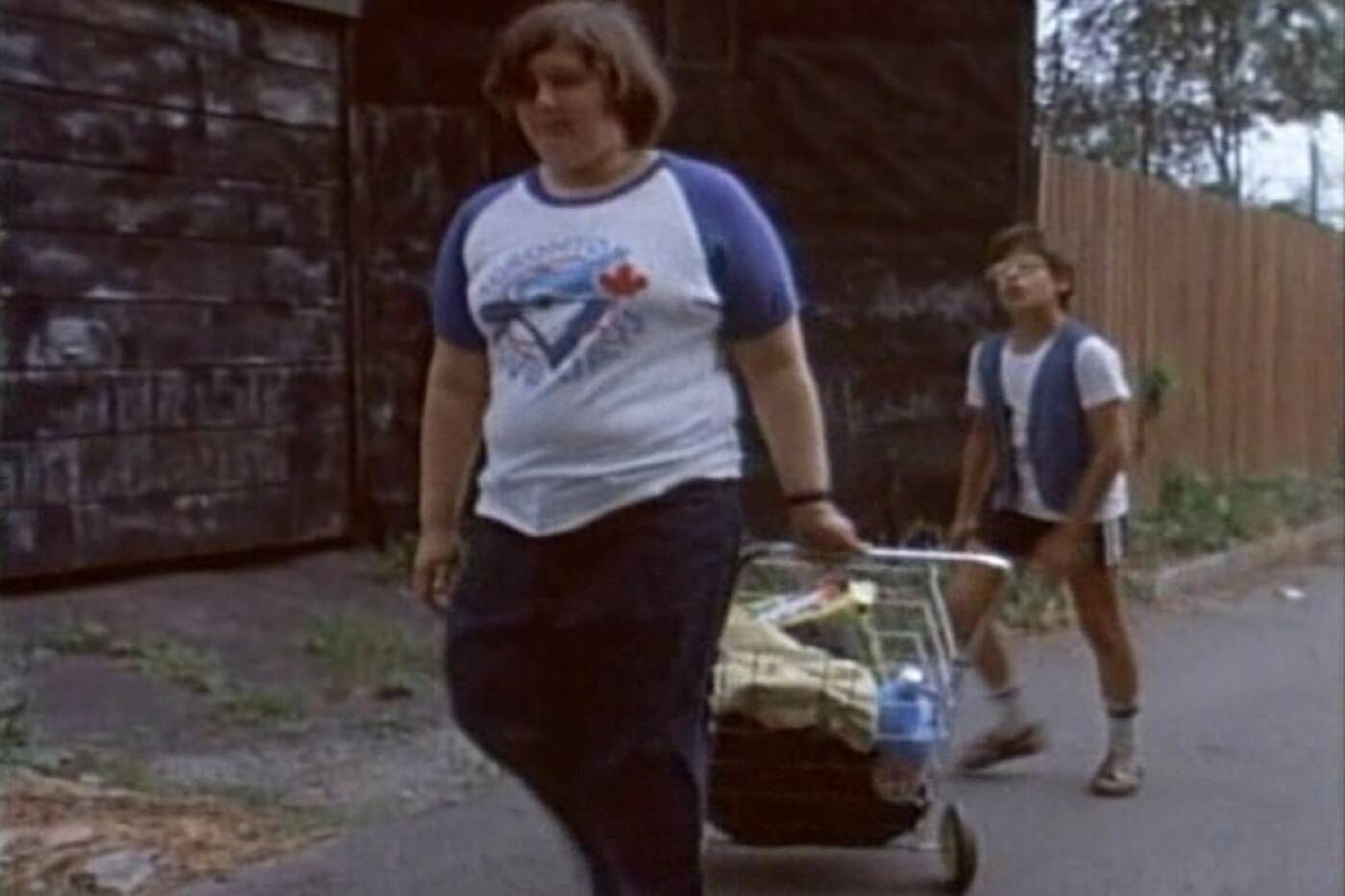 "The Kids of Degrassi Street" series was widely hailed as being a realistic and non-condescending look at how real kids behaved, spoke to one another, and interacted with adults. It perfectly captured multicultural Toronto in the late 1970s/early 1980s, a Martian atmosphere to many in other parts of North America. Image courtesy of Retrontario.

"Ida Makes a Movie" was their debut Degrassi production and featured many of the stylistic techniques they felt were missing from productions aimed at a younger audience.

The short film was shot in an almost cinema verité style, with hand-held camera work, naturalistic performances (i.e non-actors in all roles) and filmed entirely on location. 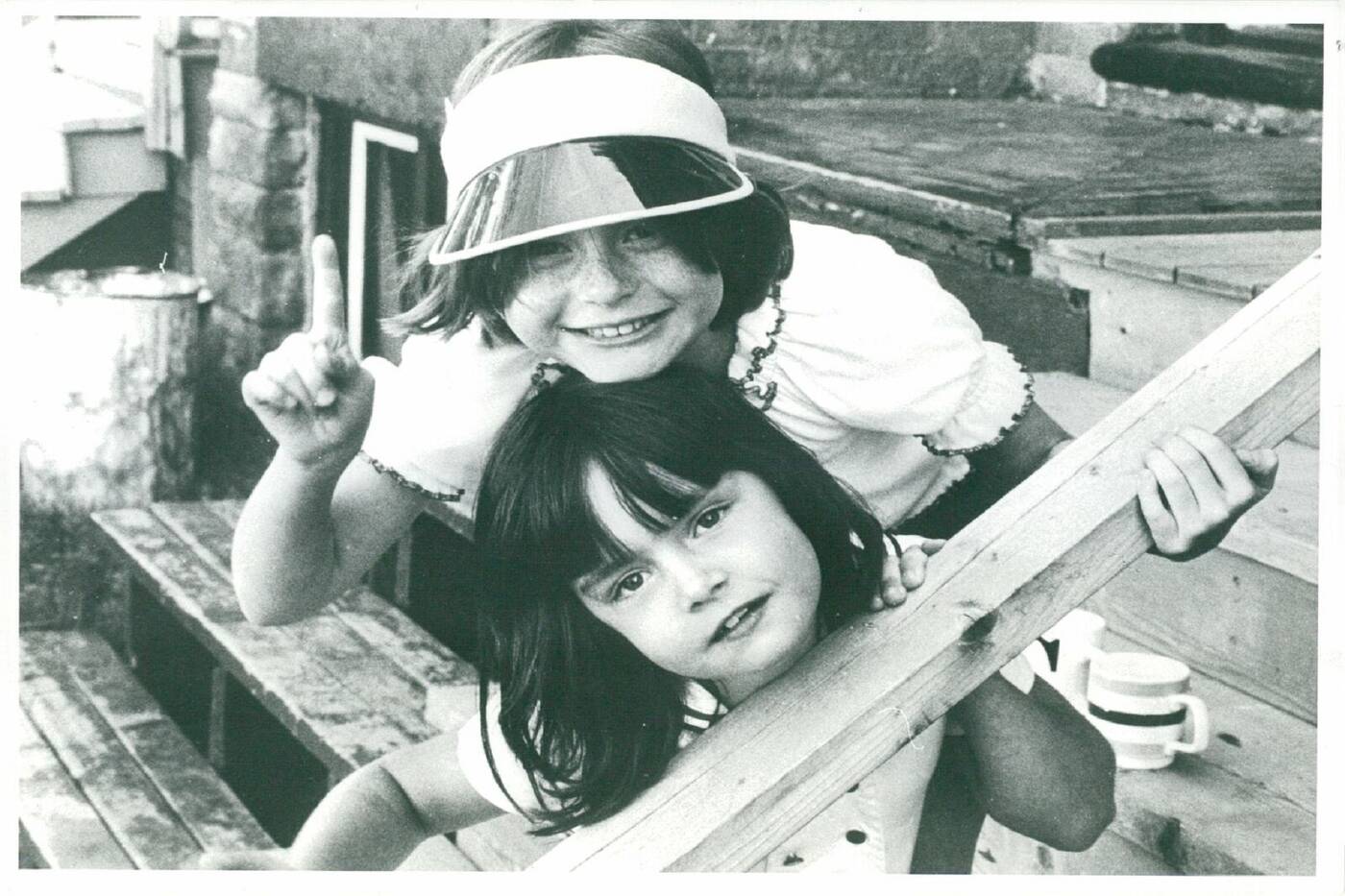 The original series star, Zoe Newman who played Ida Lucas, retired from acting after the "Kids" series and later became a professor at the University of Toronto. Image courtesy of Retrontario.

Bruce Mackey offered up his house as a place for his budding filmmaker friends to shoot some scenes, and it just so happened he lived at number 98 Degrassi Street in Leslieville. And thus, the legend was born. (Mackey passed away in 1997, and there is now a local park named after him).

"Ida Makes a Movie" was well received and was followed up by two more short films, "Cookie Goes to Hospital" and "Irene Moves In" (the former dealt with childhood anxiety about hospitals, the latter on judging people by the way they looked). 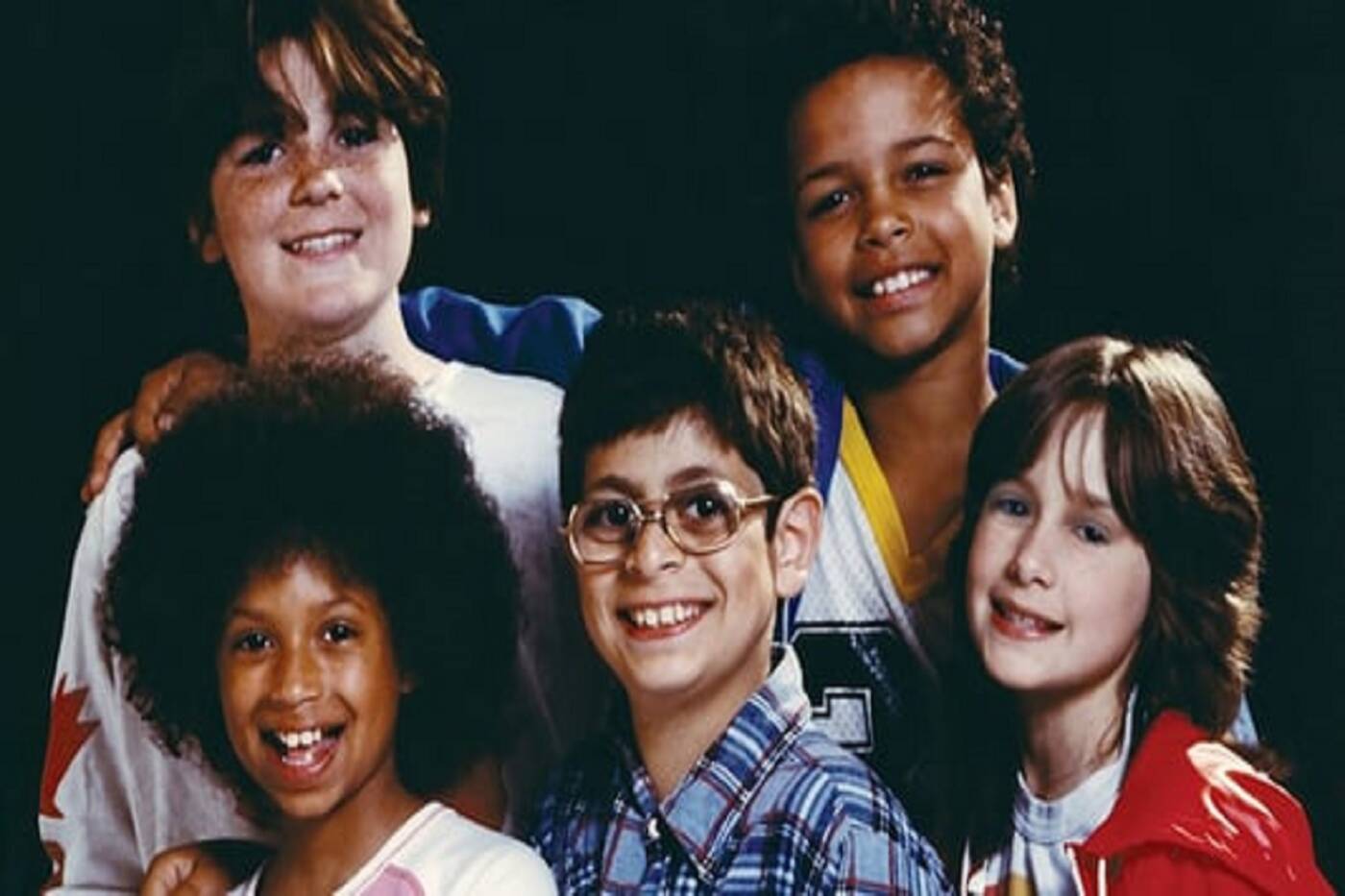 The kids are alright: The cast of "The Kids of Degrassi Street" in the early 1980s. Image courtesy of Retrontario.

At this point Schuyler and Hood were encouraged by the CBC to develop these short films into a longer sequence, and the series of "The Kids of Degrassi Street" was officially created. It ran a total of 26 episodes.

A new title sequence was created featuring a short maudlin piano piece over top black and white stills of a chilly-looking Leslieville in the late 1970s and added onto the first 3 short films:

They had different names however, and were not meant to be the same characters. 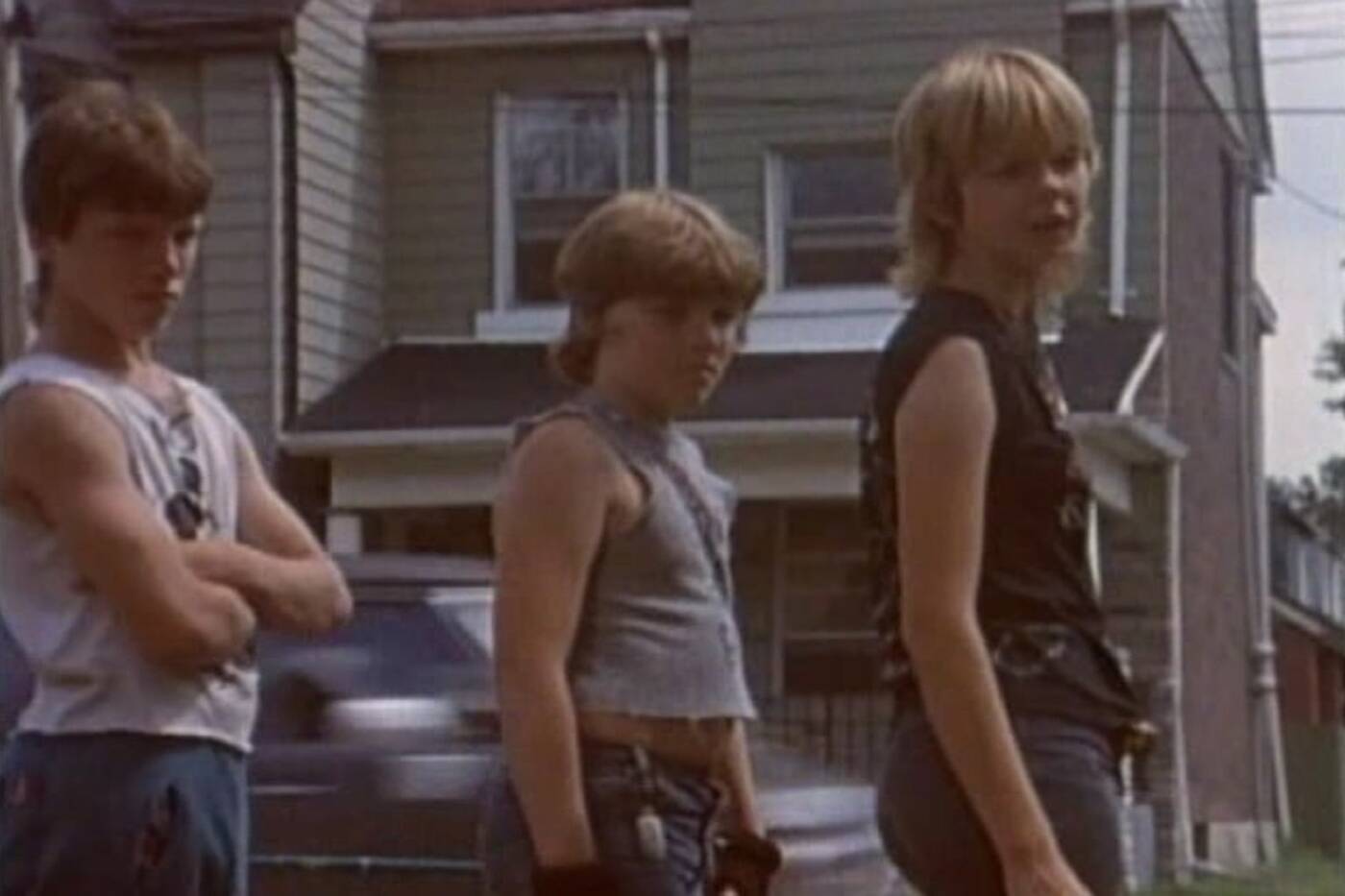 The series was regularly shown on the CBC and later around the world, and most famously distributed on 16mm film by the Learning Corporation of America for rainy days and social studies classes. Tie-in paperback books were also published. 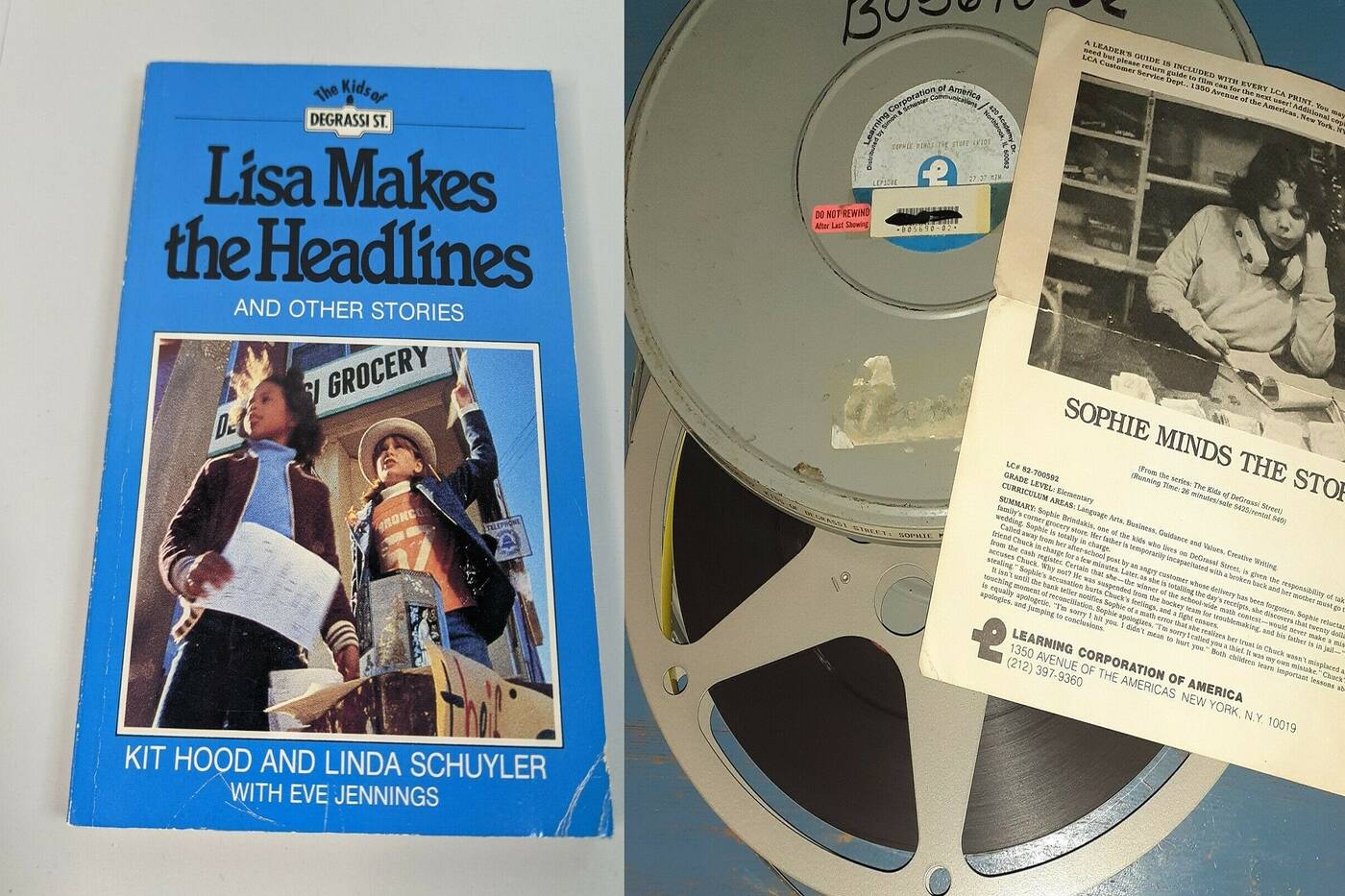 Curriculum vital: Books and 16mm films of "The Kids of Degrassi Street" populated schools and libraries around the world. Image courtesy of Retrontario.

By the mid-1980s, Playing With Time Inc. was ready to regenerate the series into something bigger, aimed at even older kids - those entering junior high.

Come give us a try at Degrassi Junior High

When the CBC announced the production of "Degrassi Junior High" in 1986, many fans of the original series felt betrayed.

Ironically, "Junior High" is now cited as being the gritty realistic one in comparison to its sequel series "The Next Generation," but in 1987 it was considered slightly glossier and not as genuinely home spun as "The Kids." 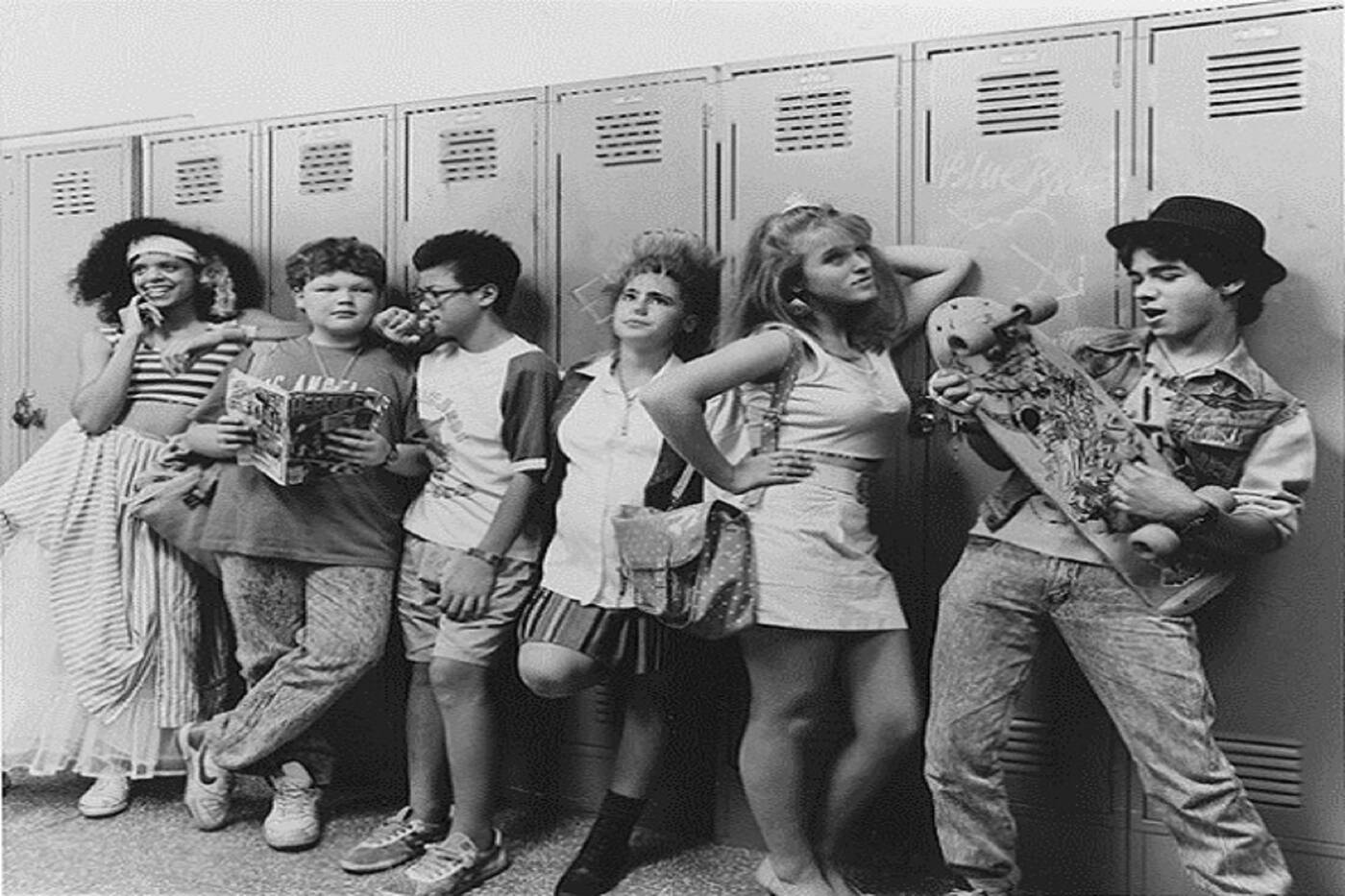 No more kids:  In 1987, "Degrassi Junior High" reset the story with new characters and re-named favourites from "The Kids." Image courtesy of Retrontario.

Before "Degrassi Junior High" premiered in the Fall of 1987, there was one last "Kids" adventure, a non-canonical spin-off featuring many of the same actors (again, with slightly different names).

Co-produced with the Construction Safety Association of Ontario, "Danger Keep Out!" was a single 30-minute episode about the dangers of kids playing on construction sites:

Recently unearthed by Retrontario, you can see this episode is the ultimate blending of both "The Kids of Degrassi Street" and "Degrassi Junior High," both stylistically and casting-wise (Siluck Saysanasy pops up as an early version of Yick Yu).

While "Degrassi Junior High," "High," "The Next Generation," "The Next Class," and even "Degrassi Talks" (a heavy documentary series about Alcoholism, Drug Abuse and Teen Pregnancy) all have their ardent fans, "The Kids of Degrassi Street" strangely remains a somewhat overlooked curio. 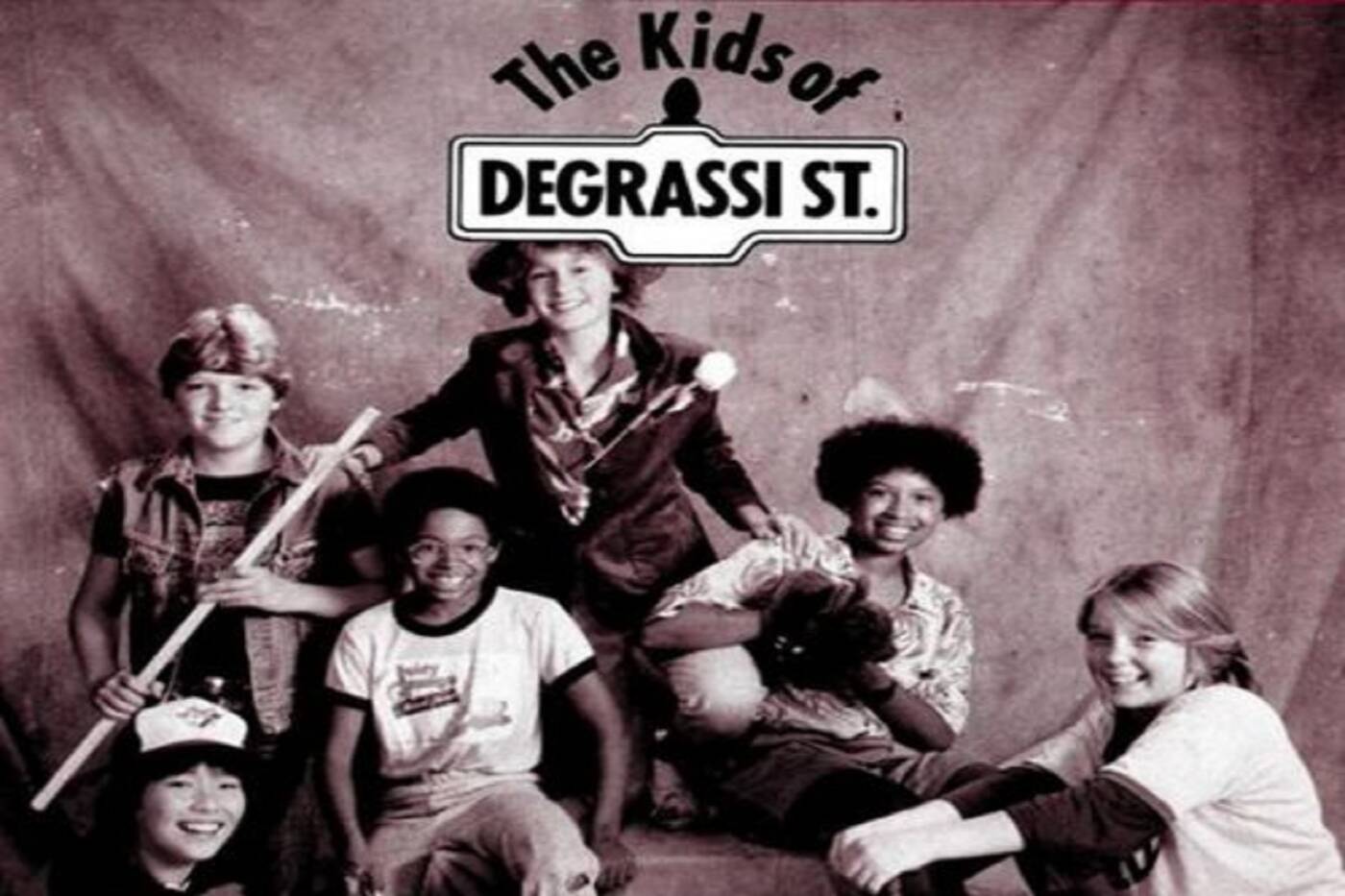 Perhaps because of its age, or target demographic, or even the fact its technically not part of the larger Degrassi canon, "The Kids of Degrassi Street" never really gets the kudos it deserves. Image couresty of the Riverside BIA.

When Degrassi returns in 2023, it will be almost 50 years since Ida Makes a Movie was published, and history was made when a pre-school tale of a Kitten making a short movie spawned the most successful television franchise in Canada. 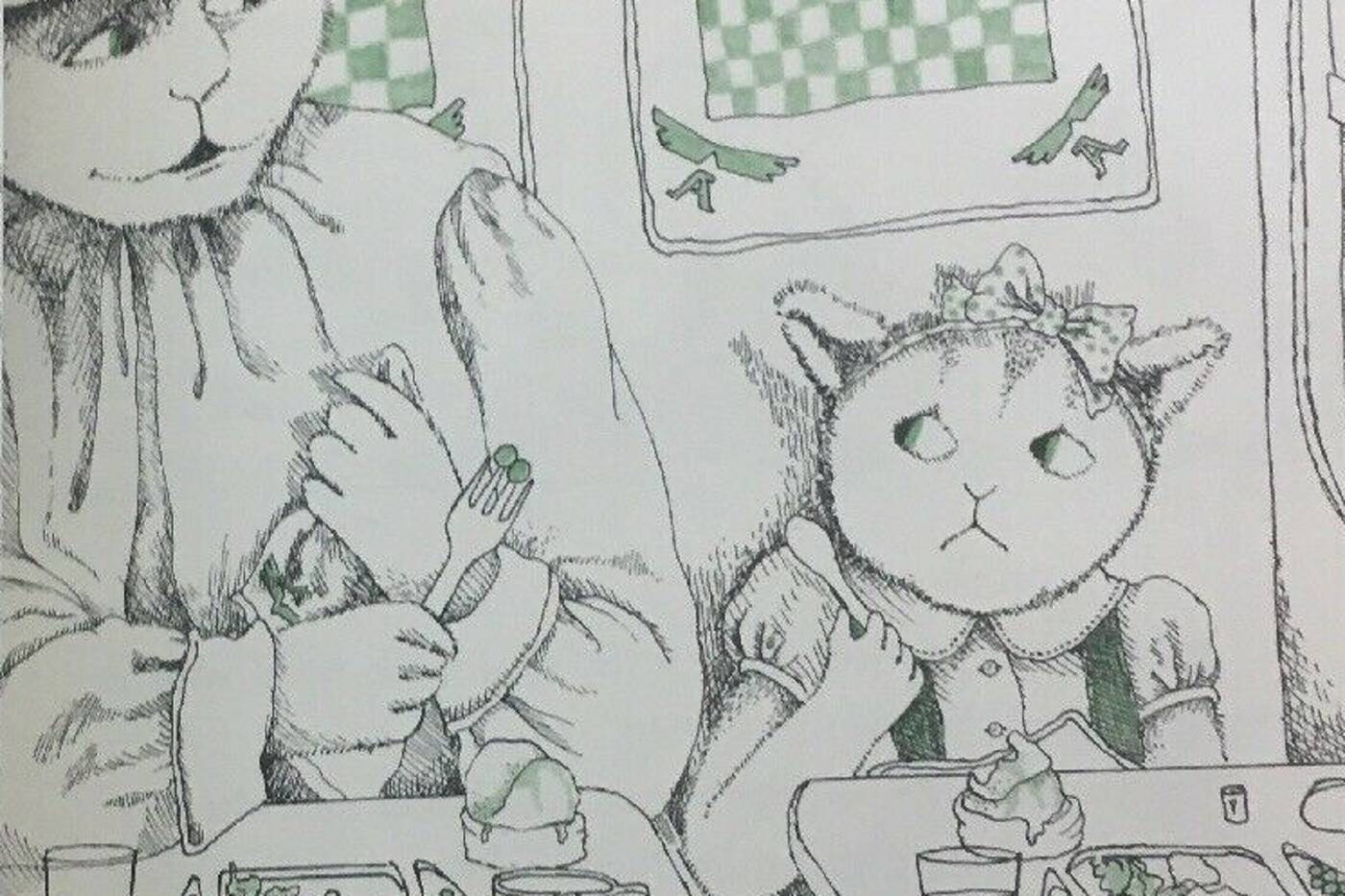 Imagine the paw-sibilities: Who knew a cat would spawn the Degrassi Street empire? Image courtesy of Retrontario.