It was a star-studded affair on Thursday evening for the Canadian premiere of The Matrix Resurrections in downtown Toronto, with star of the film Keanu Reeves (or should we say Chuck Spadina) in attendance to launch the fourth instalment in the mind-bending action/sci-fi franchise. 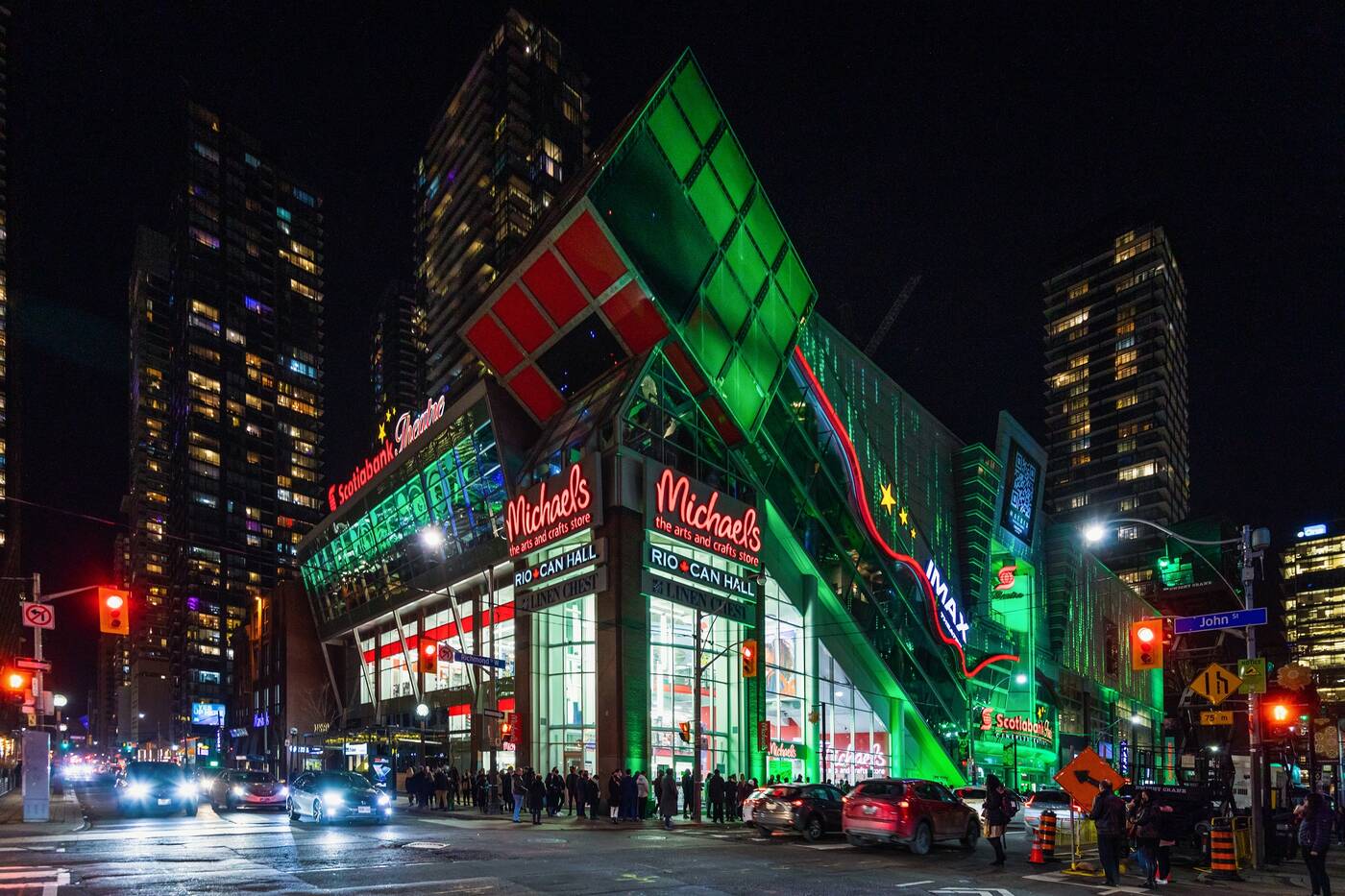 The Scotiabank Theatre was the site of the Canadian premiere of The Matrix Resurrections. Photo by Jack Landau.

Crowds snaked around the block for the exclusive event, clamouring for the chance to be among the first to see the much-hyped return of The Matrix franchise. 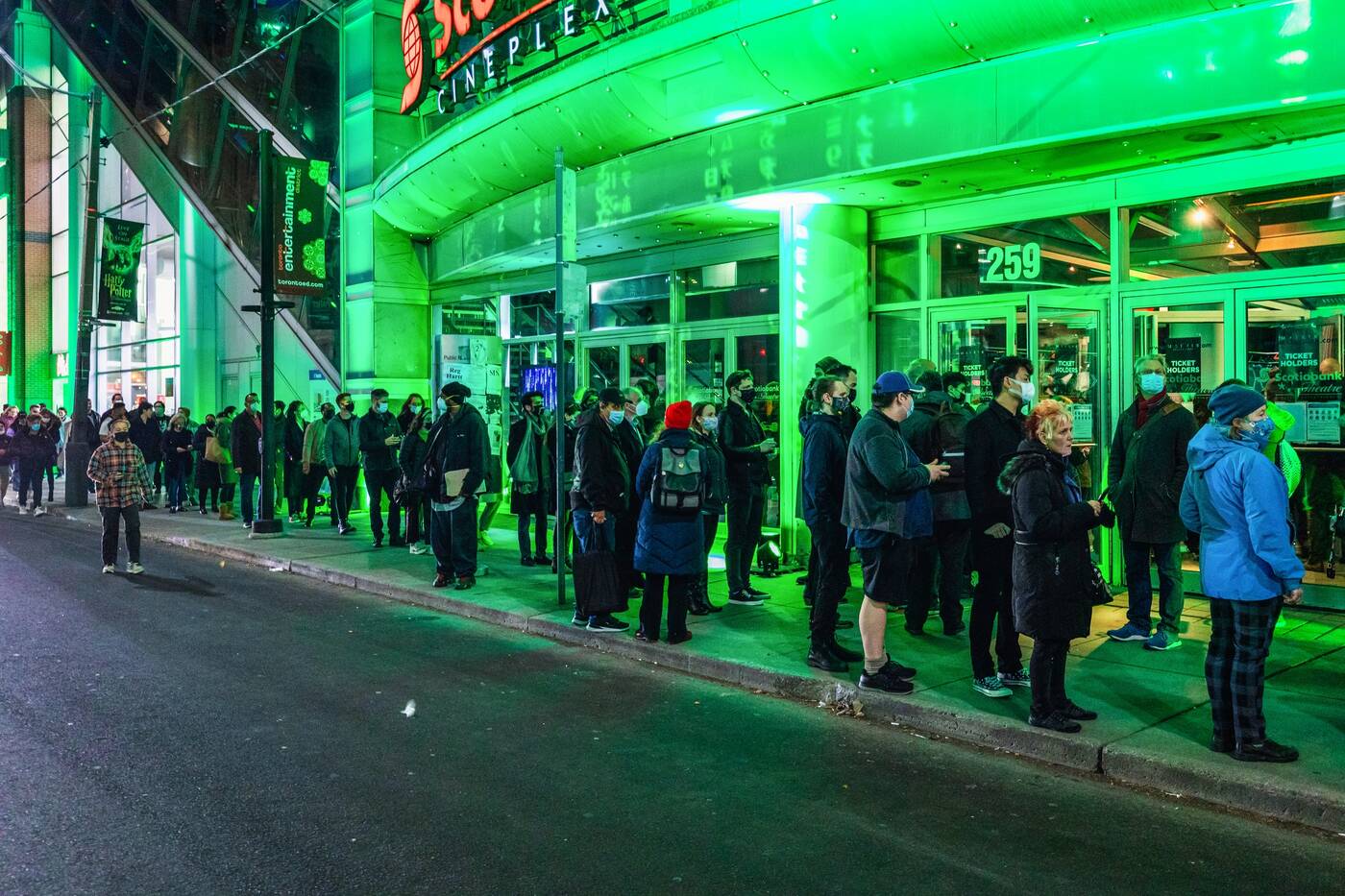 Crowds lined up around the block for the Canadian premiere of The Matrix Resurrections. Photo by Jack Landau.

Cineplex's Scotiabank Theatre was transformed with the green "digital rain" made famous by the franchise, projected onto just about every imaginable exterior and interior surface of the multiplex. This neat little thematic addition was accomplished using high-definition projection mapping. 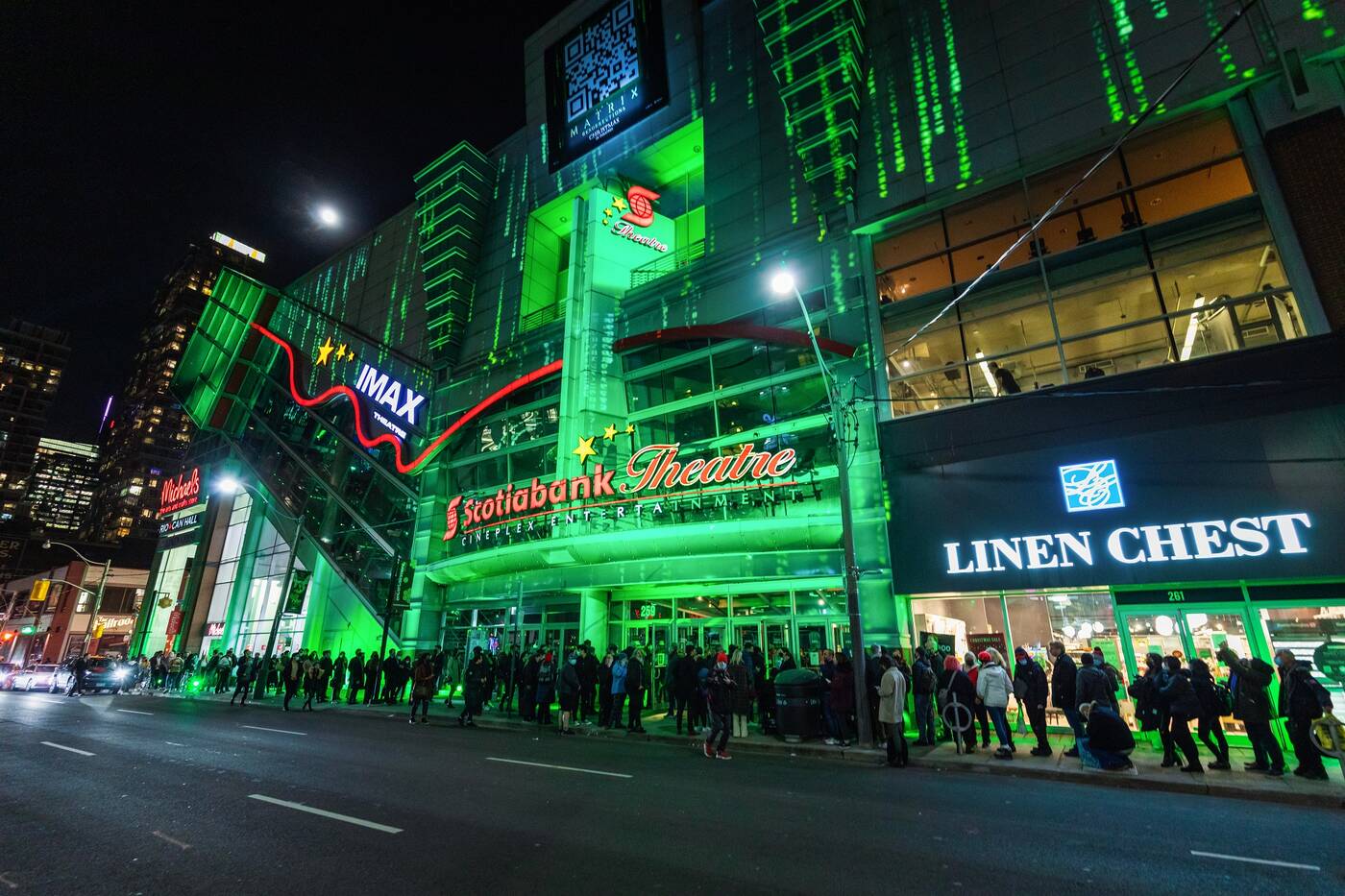 The theatre was illuminated with the franchise's iconic "digital rain". Photo by Jack Landau.

Even just ascending the theatre's iconic (and problematic) escalators was a trip, like stepping from a polished simulated reality into a digital world defined by cascading lines of code. 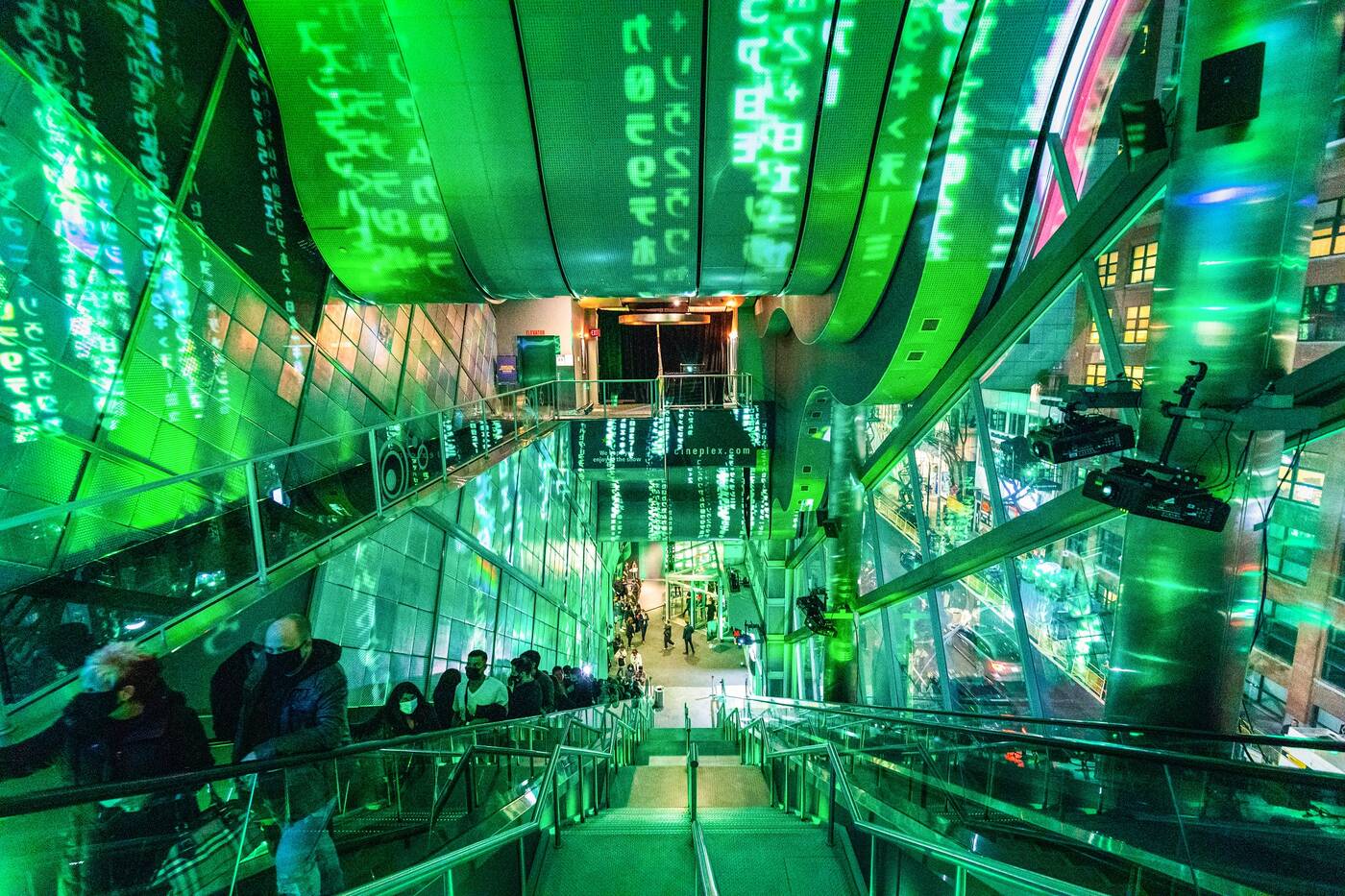 Shortly before the screenings, fans of the franchise got the even rarer opportunity to be in the presence of movie royalty and see Keanu Reeves walk the theatre's 'black carpet.'

Many attendees won a spot at the premiere via contests and passes, including lucky winners of a blogTO contest.

Viewers gathered for a simultaneous screening on all 14 of the theatre's screens. While there were no coming attractions, some attendees were treated to a surprise in-person appearance by Keanu Reeves himself.

Even theatres that Keanu didn't personally appear in still got a special treat in the form of a cheerful (if not a little forced and awkward) pre-recorded greeting from Keanu Reeves and co-star/fellow Canadian actor Carrie-Anne Moss. 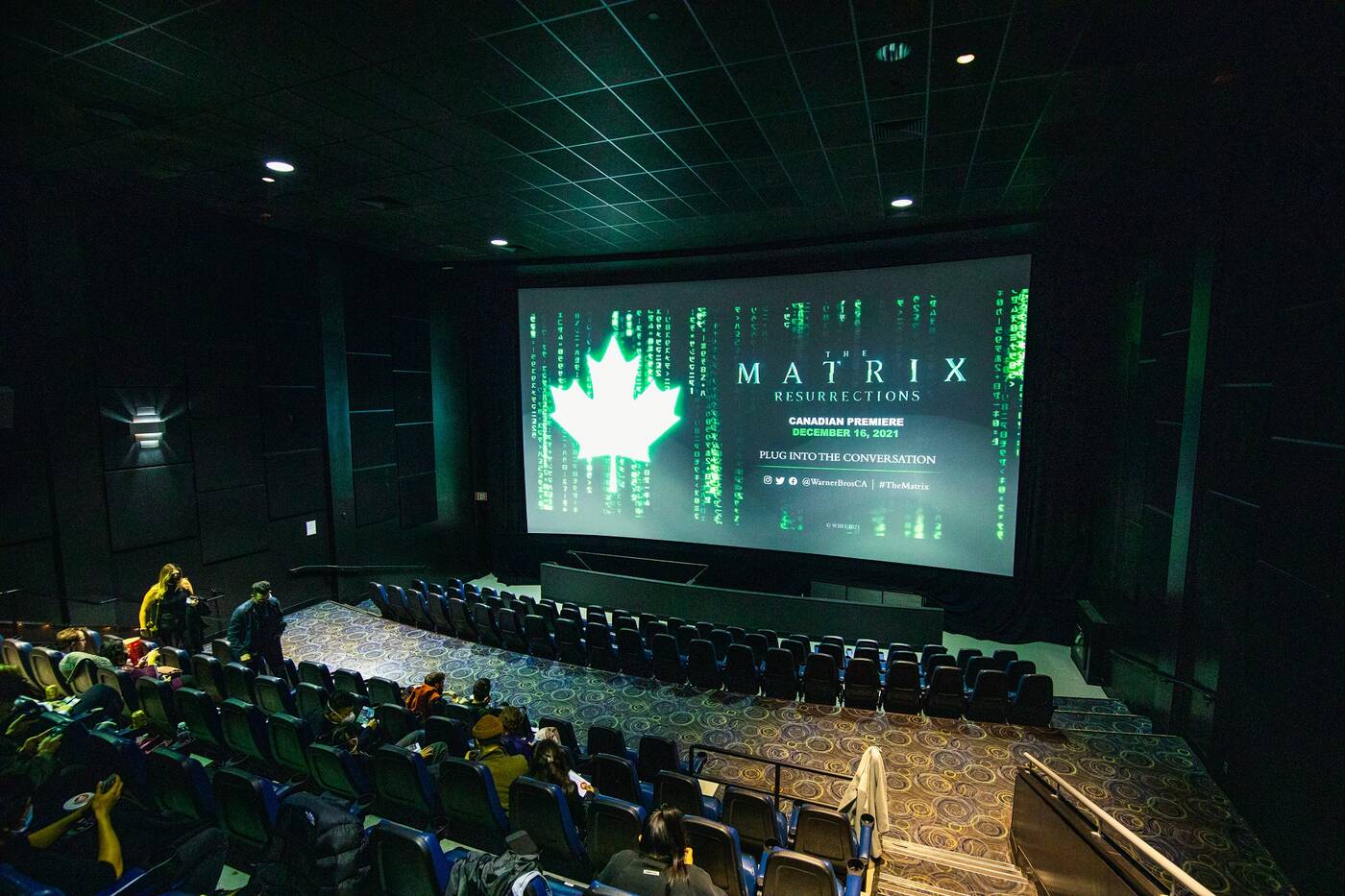 Inside one of the 14 theatres awaiting the start of the show. Photo by Jack Landau.

The themed decorations, long lines, and general excitement gave off a real Hollywood atmosphere for those lucky enough to attend the premiere, though, for everyone else, the movie will arrive in theatres on December 22.

Popular TV shows are auctioning off thousands of props in Toronto