The history of the haunted movie theatre on St. Clair West in Toronto

The Vaughan Theatre disappeared from the Toronto scene many decades ago, but it remains vivid in my memory as it was one of the first theatres that my parents allowed me to attend that was not within walking distance of our house.

I especially recall that on hot summer days, when the streets of Toronto sizzled with heat, my friends and I boarded a Vaughan Bus at Oakwood Avenue and Vaughan Road to travel to the theatre.

Because the Vaughan Theatre was only three years old in 1950, the air-conditioning system was new. It was "goose-bump" cold. I also remember seeing the film Francis the Talking Mule at the Vaughan.

As we were pre-teens at that time, my friends and I thought it immensely funny. I remember the line in the movie when Francis the Mule said that he received his information from the FBI—"Feed Bag Information."

The doors of the Vaughan Theatre facing St. Clair Avenue were large sheets of glass, with no metal frames around them. We considered this to be ultra-modern.

The appeal of the theatre continued in the lobby area, where a sleek candy bar of metal and glass wrapped round the north side of the lobby. On either side of the candy bar were sloped ramps that led up to the auditorium.

The seats were extra plush and the stage curtains were rich in appearance and velvety. I believe that they were royal red. When they majestically parted to allow the featured films to begin, it was as if a window on the world had opened.

I remember viewing the film, Son of Ali Baba, starring a very young Tony Cutis and the beautiful Piper Laurie at the Vaughan in 1952. In the movie, when the magic carpet flew over the city of Baghdad, I felt as if I were floating away to realms beyond my wildest dreams. The magic of the movies never departed from my heart. 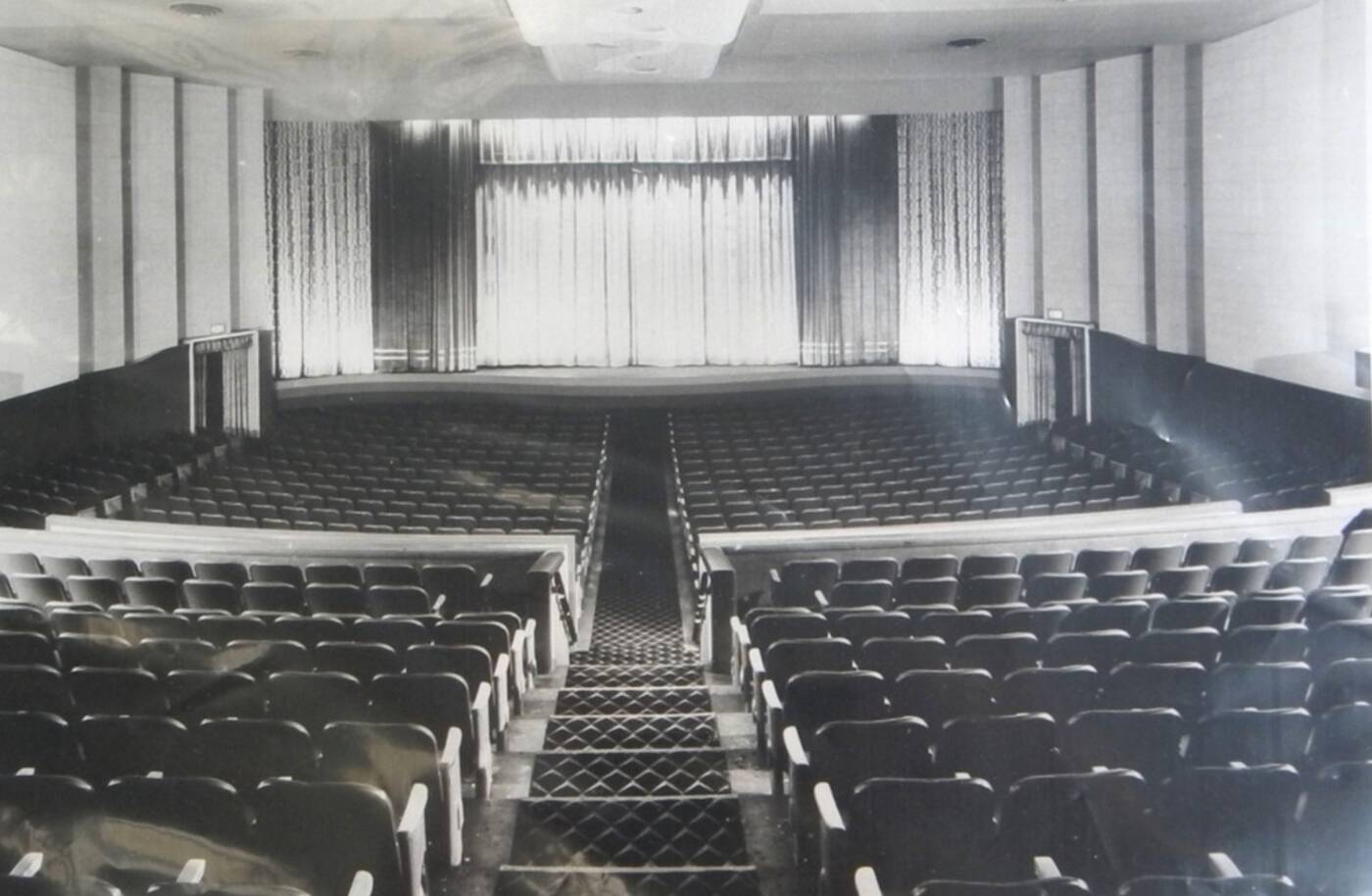 Inside the Vaughan Theatre in Toronto.

The Vaughan was built in 1947, two years after the Second World War. During the war years, because the news from the battlefront in Europe had been depressing, with casualties reported daily, the movies allowed an avenue of escape for Torontonians.

Following the war, movies remained highly popular and new theatres continued to be opened throughout the city. The Vaughan was one of these, and for "B and F" Theatres, it was considered one of their finest venues.

It seated 1000 move-goers, which was more than the companies' other two large theatres—the Donlands in East York and the Century on the Danforth.

Because theatres competed for audiences, they offered special promotions to attract people on Monday and Tuesday evenings, when audiences were more sparse. Free chinaware and autographed pictures of movie stars were among the items offered.

The architectural firm that designed the Vaughan was Kaplan and Sprachman. Harold Solomon Kaplan (1895-1973) and Mandel Sprachman created the designs for many of the city's finest theatres—the Casino, Eglinton, Downtown, Bellevue, Colony, and the Town Cinema.

Those who remember Toronto's golden age of movie houses, will recognize these names.

The Earlscourt History Club, on a post published in November of 2009, stated that there is a story about a man who hanged himself in the Vaughan Theatre, on its opening night. Lore has it that the building became haunted.

As a pre-teen, I never heard this rumour, but if I had, it would have added to the appeal of this grand theatre. Unfortunately, the only goose-bumps I experienced in the theatre were from the air-conditioning, rather than from a ghost.

The Vaughan Theatre was demolished in the 1980s, and several commercial buildings now occupy the site.

Doug Taylor was a teacher, historian, author and artist who wrote extensively about Toronto history on tayloronhistory.com. This article first appeared on his site on May 15, 2013 and has been republished here with the permission of his estate. The article has been modified slightly.