The history of the Mr. Dressup TV show and its connection to Toronto

If there were ever a Mount Rushmore of Canadian pop culture, surely Ernie Coombs aka Mr. Dressup would be on it.

Although a true National icon - a Father figure who united our childhoods coast to coast – Mr. Dressup was filmed in Toronto and Ernie Coombs lived in Pickering and spent a lot of time in Scarborough. 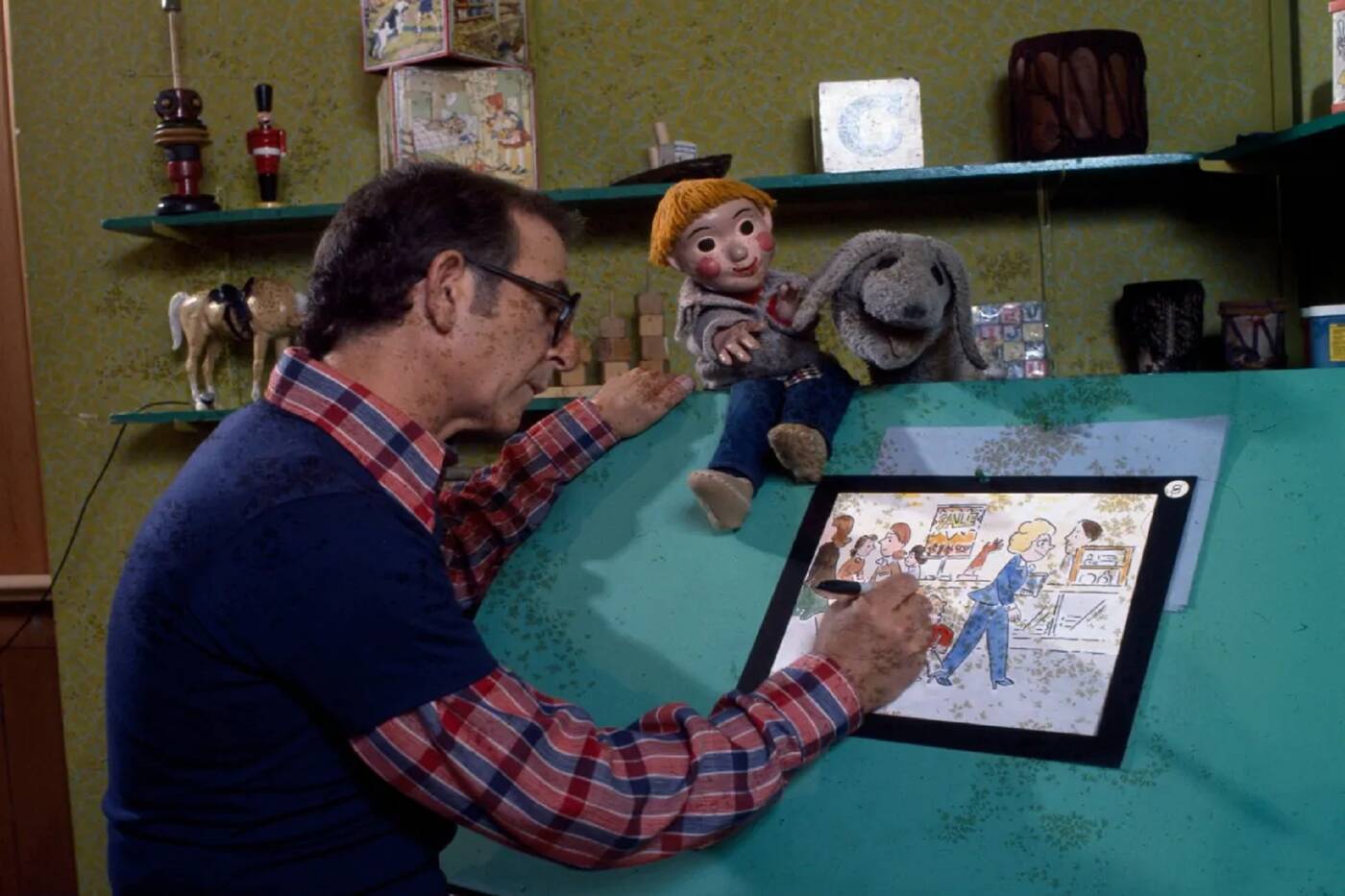 From drawing to cosplay, Mr. Dressup invited Canadian kids to engage with their imaginations. Photo via CBC Still Photo Collection

It has been over 25 years since the final episode of Mr. Dressup aired in February of 1996 on the CBC, but if you grew up between 1964 and the late 1990s chances are you think about him often, or in relation to subjects like costumes, crafting and kindness.

Coombs arrived in Canada in 1963 when his good friend and co-worker Fred aka “Mister” Rogers was head-hunted by the CBC to anchor a new children’s series entitled Misterogers.

They had been working together as puppeteers at the WQED PBS station in Pittsburgh, Pennsylvania, so naturally Rogers brought Coombs with him to Toronto to work on his new show.

When Fred Rogers returned to the United States to embark on a revised version of that show, now titled Mr. Rogers Neighborhood, Coombs stayed in Toronto and created the Mr. Dressup character for another lavish CBC kid series entitled Butternut Square.

Butternut Square featured a cavalcade of characters and puppets, including a young boy and his dog – Casey and Finnegan – operated and voiced by Judith Lawrence.

Coombs and Lawrence worked so well together they even created a live act titled “The Tickle Trunk” which played the Poor Alex Theatre back when it was located in the Annex.

Coombs later claimed the now legendary alliterative name “Tickle Trunk” had popped into his head while stuck in a traffic jam at Bayview and Shephard. 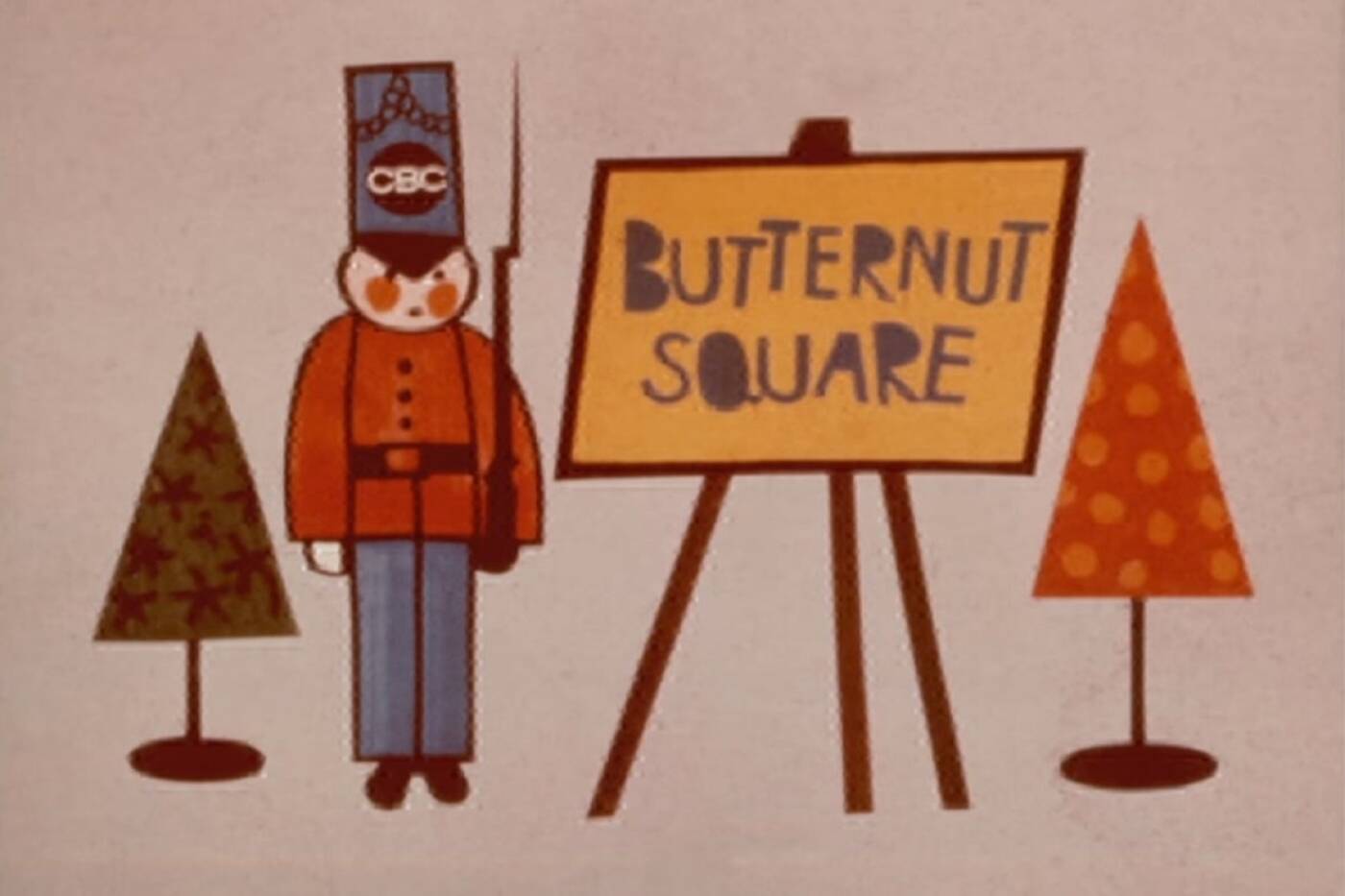 A heritage moment: Butternut Square introduced Mr. Dressup, then provided him an opportunity for his own show. Photo via CBC Still Photo Collection.

Owing to budget cuts, the CBC decided to spin Butternut Square off and give Mr. Dressup his own pared down show, co-starring his friends Casey and Finnegan, and featuring the music of Donald Himes who had appeared as the “Music Man” on Butternut Square.

The rest is Canadian TV history.

Mr. Dressup’s success can be partially attributed to the non-patronizing way in which Coombs spoke to children – as equals – and the show’s moderate pacing which contrasted with the faster paced series that began to appear in the wake of Sesame Street (1969).

Coombs was always adamant they stuck to their format and not ape the escalating hyperactivity of the children’s television genre.

That they managed to do that, at least until the mid-1990s, is nothing short of incredible when similarly low-key CBC kid series like The Friendly Giant were cancelled in the early 1980s for being perceived as “too slow”.

Judith Lawrence summed it up nicely to Macleans in 2001 – “We were not speaking to the whole world. We always thought of the audience as being one child on the other side of the Television set”. 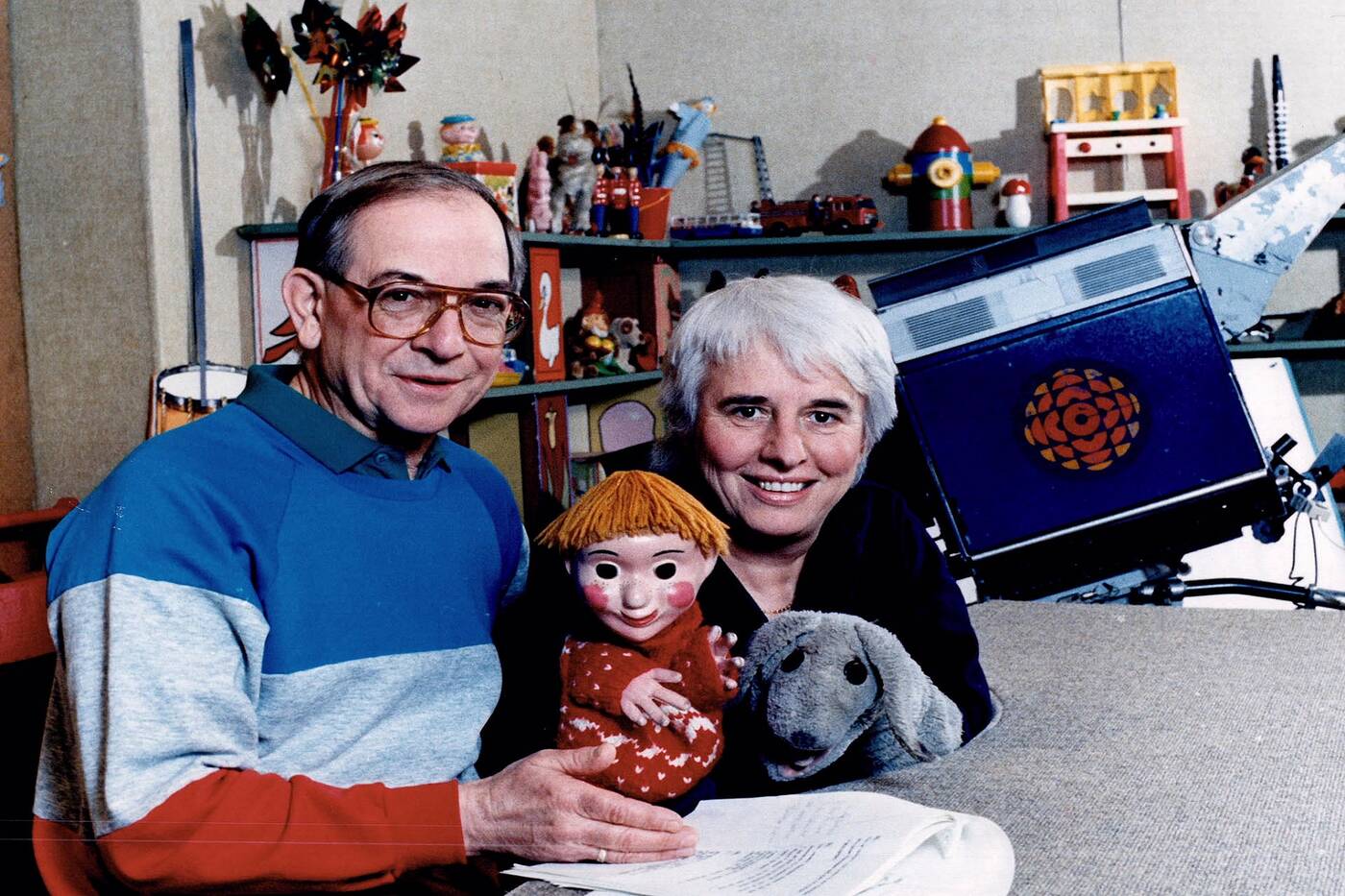 Puppet Master: Casey and his dog Finnegan were operated and voiced by Judith Lawrence, whose unscripted banter with Ernie Coombs made the show magical. Photo via the Toronto Public Library.

Mr. Dressup aired at 10:30am every weekday, so while it was mostly viewed by preschoolers, a big chunk of its audience were “sick” kids home from school. It was a home-from-school-rite-of-passage just as much as The Price is Right.

Any given episode of Mr. Dressup features a craft, a song, a story, and some imaginative costume play. While there was a loose script, Coombs and Lawrence often improvised much of the banter. 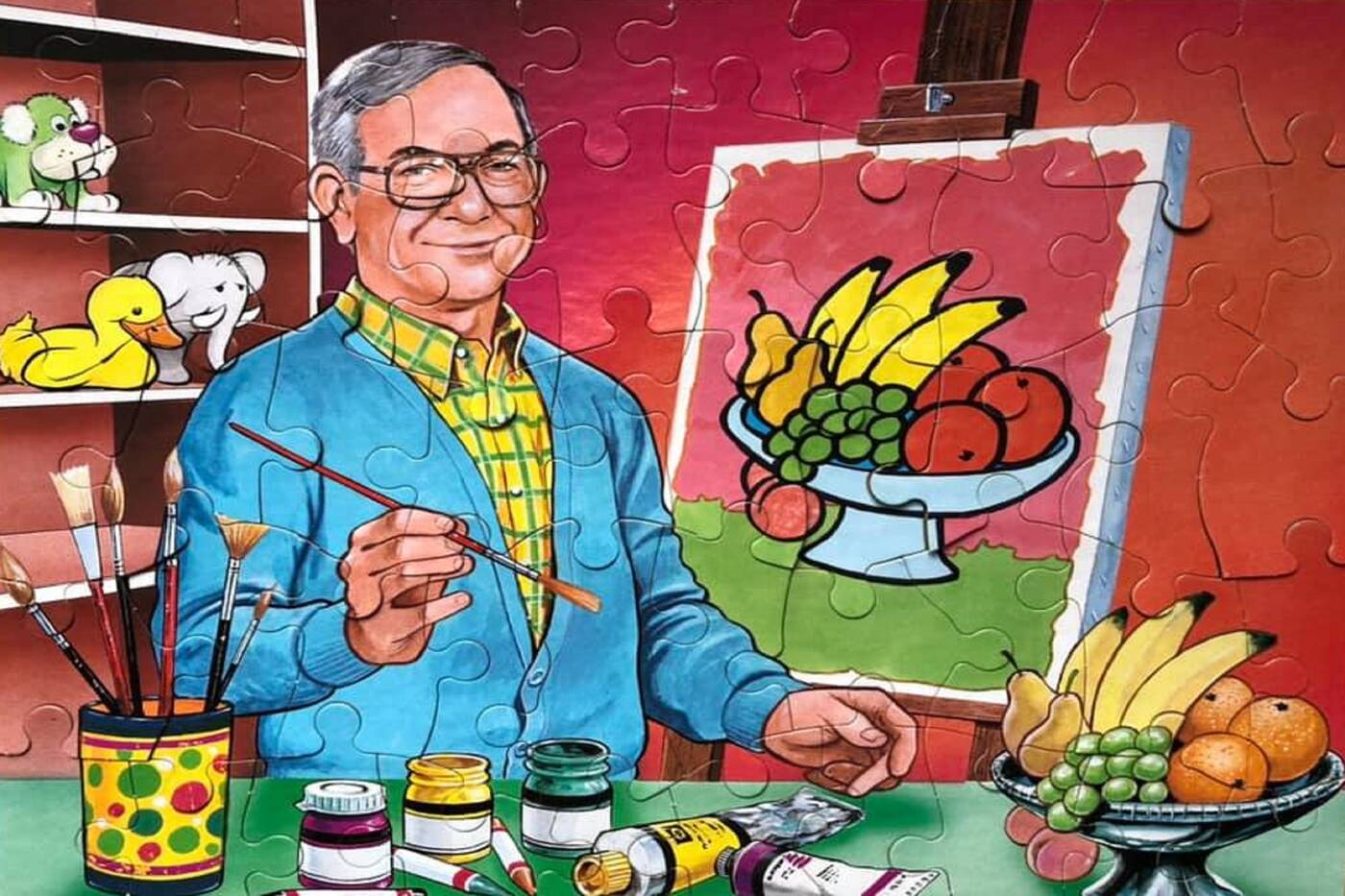 It is difficult near impossible to imagine any such deliberately paced children’s show existing post 2000, and yet most people working in creative fields in Canada now were raised by the chilled-out sensibilities of Mr. Dressup.

Ernie Coombs and his wife Marlene Coombs ran a daycare in Scarborough. Named after the starting point of Ernie’s sensational career, The Butternut School/Daycare Centre was first located at Finch Avenue East and Neilson Road, later on Milner Road at Markham Road and the 401. 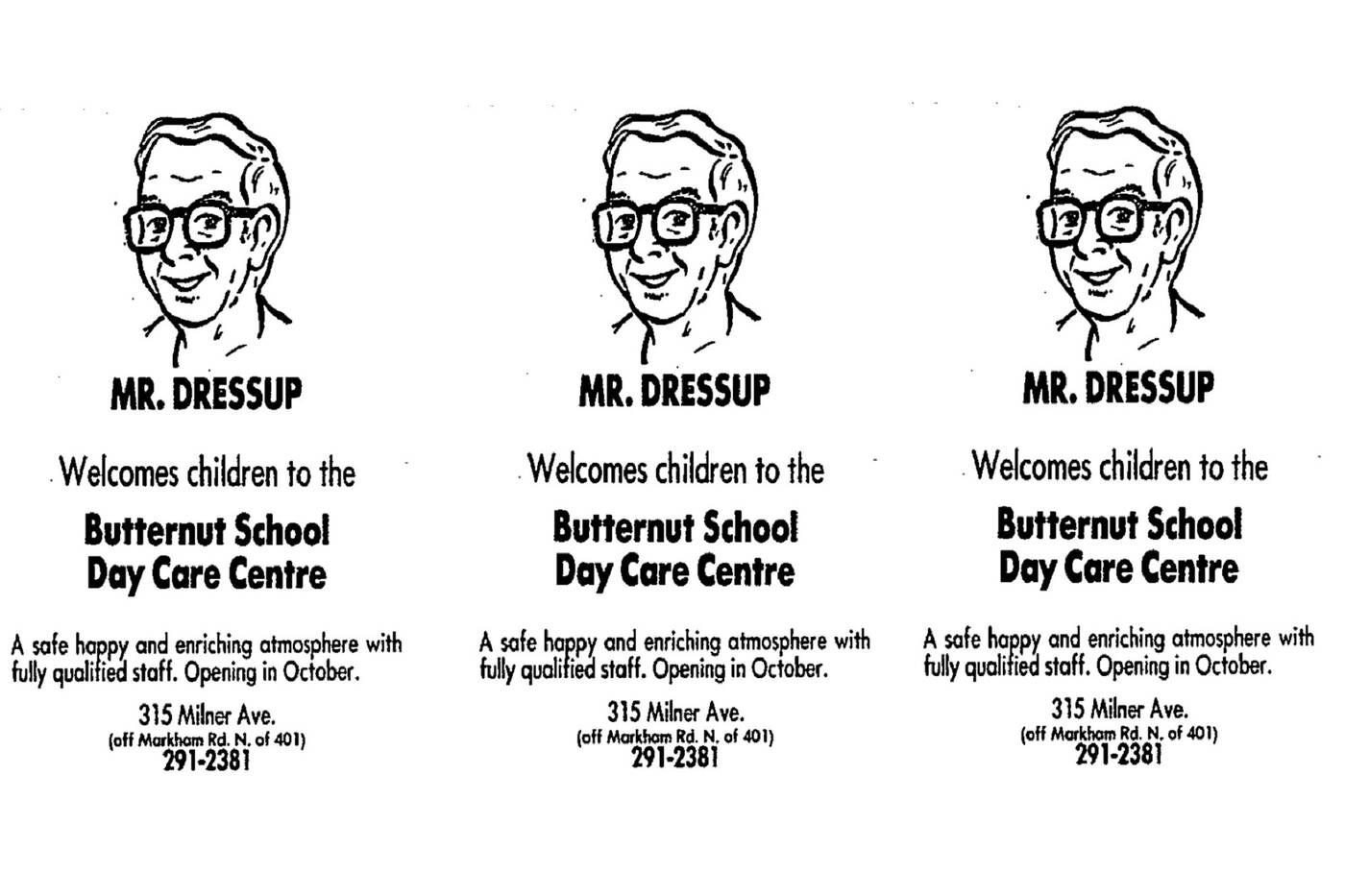 Back to cool: Some lucky children were welcomed into Daycare by Mr. Dressup himself! Photo via Retrontario.

Ernie would show up in character and welcome kids to the school.

The Coombs family lived in Pickering, and Ernie could often be spotted in the Scarborough neighbourhoods, answering all requests for stories, autographs, and hugs. 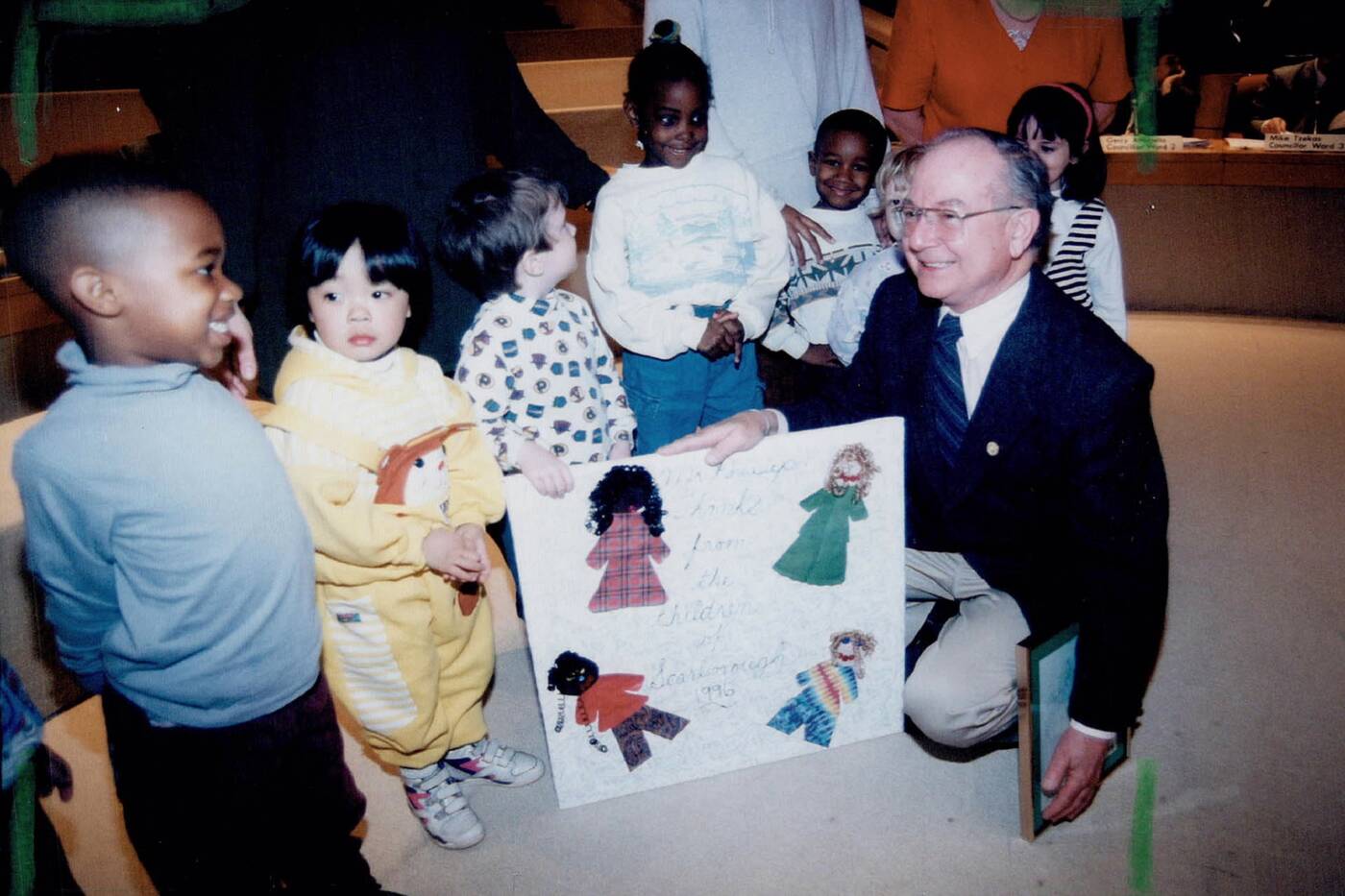 A friend indeed for friends in need. Ernie Coombs adored meeting his audience, young and old. Photo via the Toronto Public Library.

When Mr. Dressup signed-off the air in 1996 after a monumental 4000 episodes, Coombs went on a tour of Universities and Colleges to meet and greet students who turned out in droves to thank him for helping them lead such an idyllic childhood, at least in front of the TV.

Ernie Coombs passed away after suffering a stroke on September 21, 2001. The gut wrenching news was overshadowed by a world still focused on the immediate grief and trauma of the September 11 terrorist atrocities.

Repeats of Mr. Dressup continued on the CBC until 2006, but the series has been off the air since then apart from 10 or so episodes released on YouTube via Encore+ 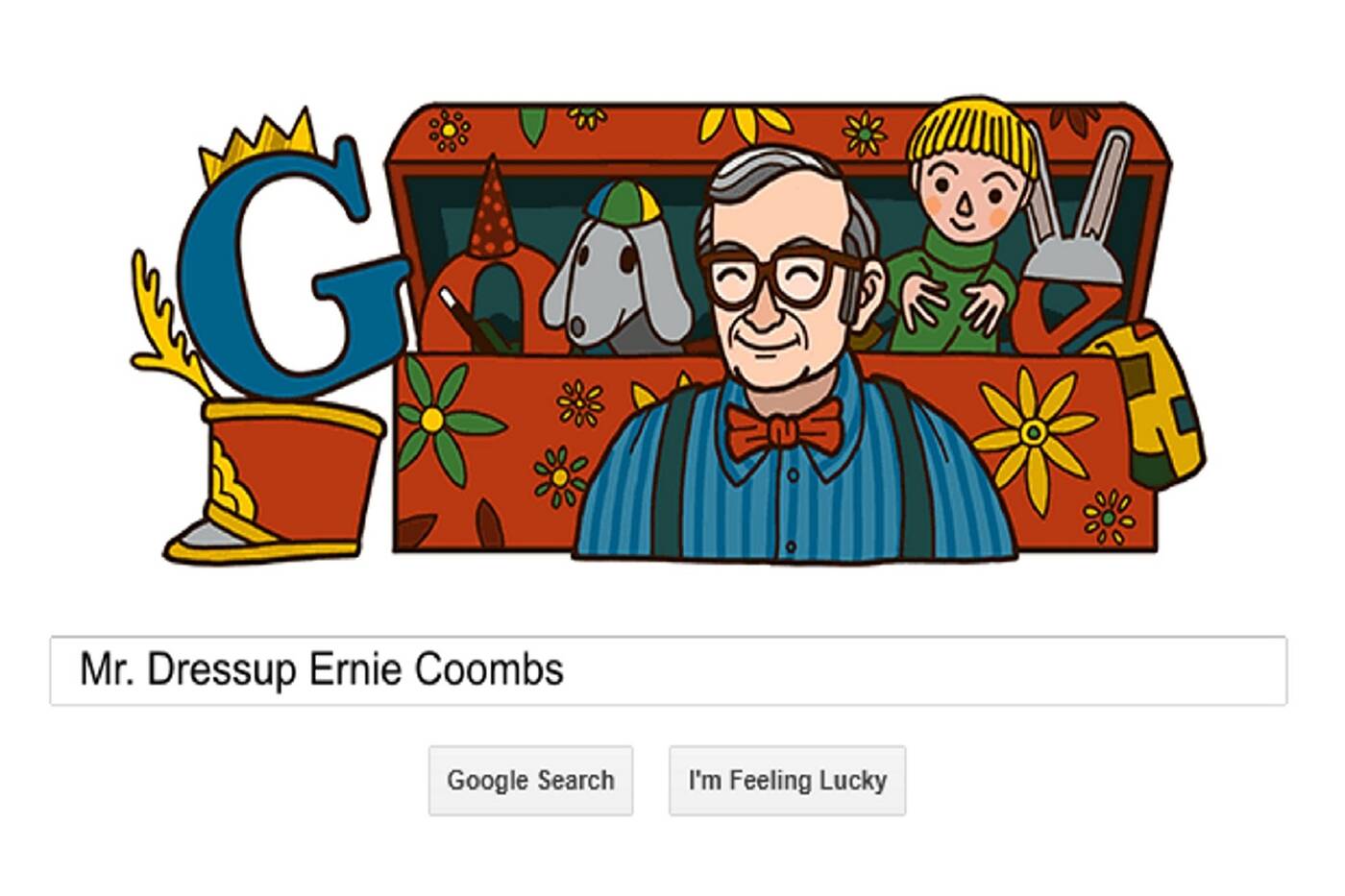 Google him: A Google doodle appeared in Canada on November 26th, 2012 to mark the 85th Birthday of Ernie Coombs.

Considering the sheer volume of episodes, it is shameful there exists no avenue for almost three generations of kids to re-live those cherished memories from a simpler time.

Not long before he died, Coombs told graduates of Trent University in Peterborough, “Keep your crayons sharp, your sticky tape untangled, and always put the top back on your markers”.