Movies are great, but if we're being honest, buttery theatre popcorn is the real star of the show. It always delivers, unlike that blockbuster film that might just be a bust.

In the current state of the world, however, not everyone's willing to pay the old movie theatre prices for old movie treats without actually seeing the movie.

News that Cineplex's Queensway location is now open for walk-ins and takeout has seen mixed reviews on an Etobicoke Facebook community group.

As of Tuesday, the theatre at 1025 The Queensway has started selling combos of popcorn, drinks and candy from their concession stand.

When it comes to Queensway's newly introduced takeout, prices are more or less the same as they have been since Cineplex signed up with UberEats to deliver their concession food in 2018, with combos differing slightly from the delivery options.

But the prices seem to have people in the group reeling, especially for the booze: Budweisers for $8, Mill St. Organic for $9, Corona for $10.

Some people are asking why they should be getting popcorn from a movie theatre at marked-up prices, without the movie experience.

And when it comes to beer, there's an LCBO and even breweries like Great Lakes and Cool Beer Brewing right across the street to quench that thirst.

But devotion to the theatre food is less about the popcorn and beer itself and more about the experience, says the manager at the Beaches' historic Fox Theatre, where takeout popcorn is so popular, they're selling out.

That – and the sort of neighbourhood support for beloved businesses Toronto's seen so much of over the past 13 months – may be why people on the other side of town are singing a different tune than the Cinexplex Queensway regulars.

Maybe people just have more love for 107-year-old local movie houses than theatre brands like Cineplex, despite the locals working in them.

Beaches locals were so obssessed with takeout popcorn, there were lineups on Saturdays.

Cooper says they considered doing delivery but they were already at capacity: the theatre was popping and selling 90 lbs of kernels in one night. Prior to the pandemic, they'd been selling the same amount over the course of an actual movie-going weekend. 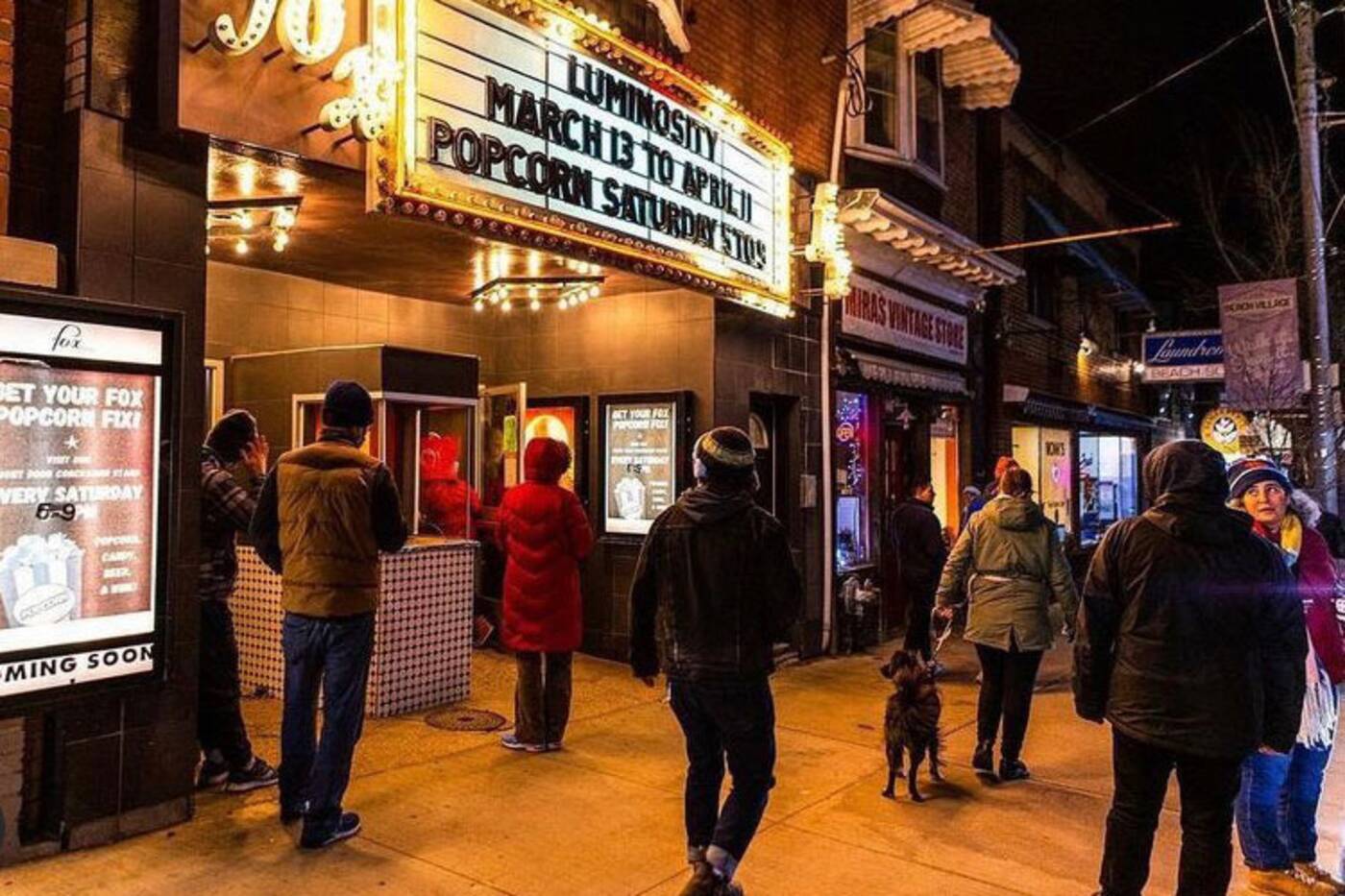 Fox Theatre's Saturday night popcorn takeout was incredibly popular. The theatre discontinued their sales through April but will be picking it back up in mid May. Photo courtesy of Kristal Cooper.

Fox Theatre discontinued its Saturday night program during April. Cooper says they'll be picking it back up on May 15.

A large bag of popcorn costs $6.26 at Fox Theatre, about $1.50 less than Cineplex Queensway's prices. If you've already decided you're going to splurge on theatre popcorn instead of buying a pack of Jiffy, it's only a bit extra.

Wine is one of the theatre's best sellers, despite the presence of a Wine Rack just six minutes' walk away.

Fox Theatre doesn't make a huge profit off their sales, says Cooper, but it adds to the "one-stop shop" feel of the theatre. Plus, their hours run later than the LCBO or Wine Rack.

She's seen people buy seven large popcorns to give out in the neighbourhood, and seen Instagram posts of date-night set-ups with Fox Theatre popcorn as the centrepiece. Many customers came every Saturday, without fail.

"I think it's part of the ritual," says Cooper from the Fox. "It's just something they do in the neighbourhood, it gets them out of the house."

"It's a special treat, and a reminder of pre-Covid times."