Cineplex says it will not be reopening movie theatres in the Ontario regions set to enter the Orange-Restrict level of the government's new reopening plan — which includes Toronto — due to financial reasons.

Movie theatres were forced to shutter in the province's COVID-19 hot spots at the beginning of October as a result of rising case numbers, but they'll soon be allowed to reopen as long as they follow the new rules outlined in Ontario's recently-released framework.

Cineplex, however, says the new guidelines — which include a 50-person gathering limit — are not financially viable and theatres in Restrict zones will therefore remain closed for the foreseeable future.

"From a financial perspective, the capacity limitation the Ontario Government has put in place for cinemas ostensibly forces the temporary closure of all of our locations in the affected areas," a Cineplex spokesperson told blogTO.

"This means that we will not be reopening our theatres in the 'Restricted' areas (aka: Toronto, Peel Region, York Region and Ottawa), and we will be closing Galaxy Cinemas Cornwall on Saturday as it is also in an orange zone."

Under the province's new guidelines, all movie theatres located in regions in the Restrict zone must limit capacity to 50 people in the entirety of the facility at one time. 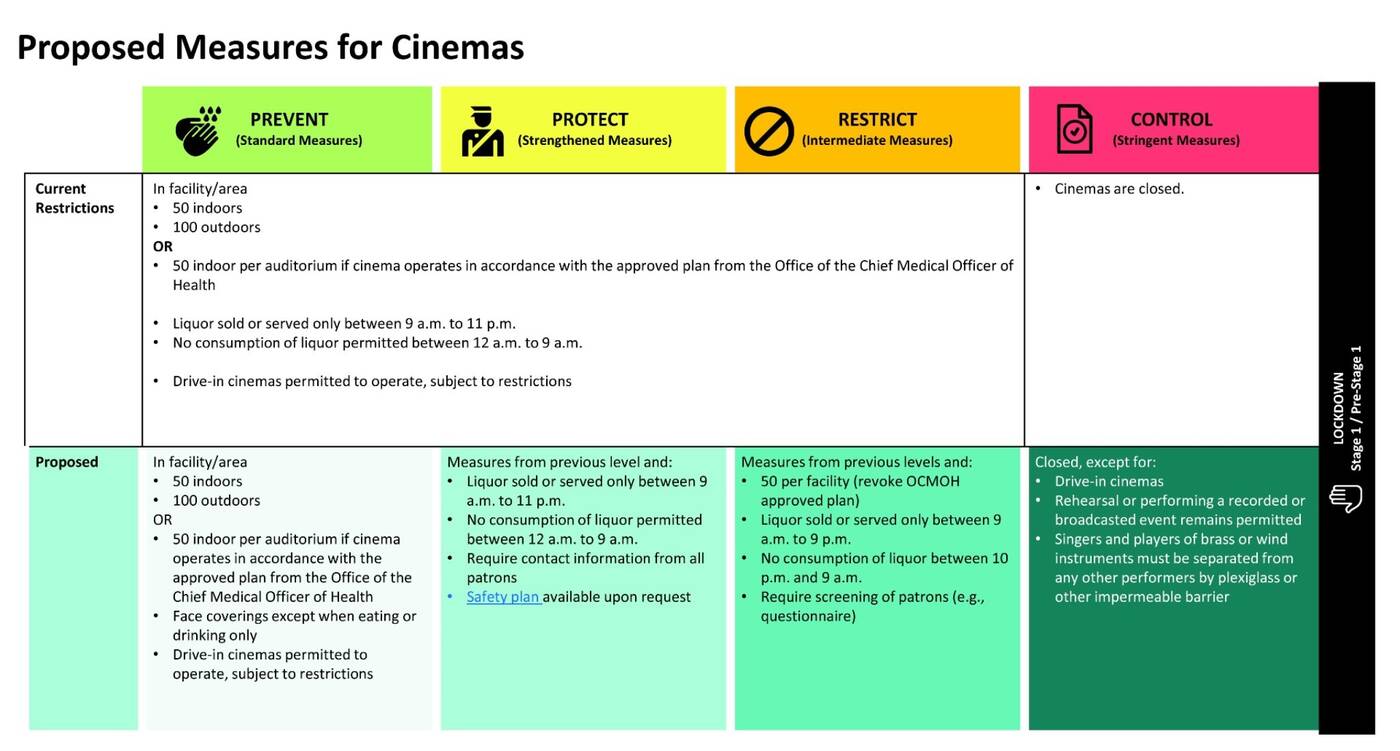 This gathering limit was originally imposed on movie theatres several months ago, but, at the request of Cineplex, the province eventually agreed to develop a new plan with the office of the chief medical officer of health that allowed theatres to host up to 50 people per auditorium.

The approved 50-person-per-auditorium plan remains in effect for all regions in both the Yellow-Protect and Green-Prevent levels, but it has been revoked for theatres in Toronto, Peel, York and Ottawa.

Still, other movie theatres will be allowed to reopen in the above regions as long as they respect the 50-person gathering limit.

Regions throughout the province are expected to officially transition to the province's new framework on Saturday, Nov. 7, while Toronto will likely be delayed from entering the Orange-Restrict level until Nov. 14 as a result of the city's concerning COVID-19 situation.