The mythical Yonge Street sin strip of the 1970s and 80s was an electric, dangerous place. Tucked away at number 373 amongst the glut of groovy head shops and skeezy massage parlours that stretched from King to Bloor was perhaps Toronto's most infamous grindhouse movie theatre - "The Rio" - a place to drink, swing, smoke, stay warm and expand your filmic horizons. 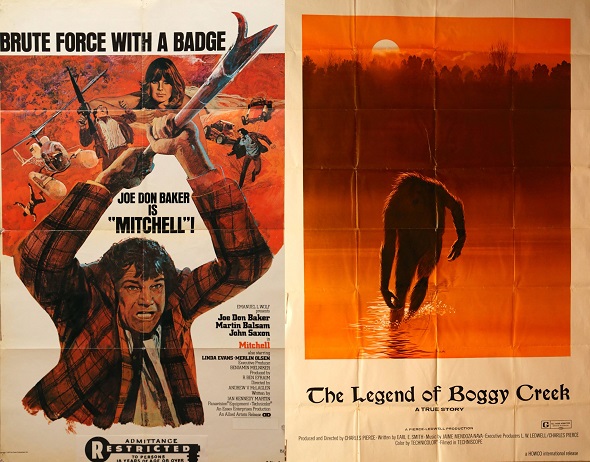 Most memorably, the exterior of the Rio was plastered in lurid movie posters. Not the kind of generic, airbrushed, photo-shopped Pablum that passes for movie posters nowadays, but actual artwork with balls, hand crafted by real artists. 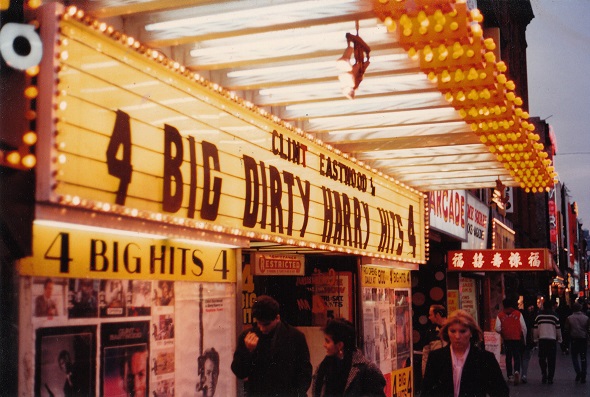 Featuring huge, over-the-top and eye gorging imagery, these posters took huckster liberties with the subject matter of the films being advertised. It was bold, stirring stuff meant to seduce folks off the street and into this den of sordid iniquity just to see what all the fuss was about.

For a paltry $4 you could enter the realm of the Rio, which programmed four films daily from many disparate genres, and stay for as long or short a time as you liked as the auditorium opened up at 9 AM and ran until midnight. Empty bottles of bum wine, harsh tokes and handjobs were the order of the day, making it pretty much the epitome of Yonge Street's well deserved seedy reputation.

Sadly the Rio closed in 1991, finally succumbing to the gentrification of Yonge Street that had begun after the so-called "Shoeshine Boy Murder" in 1977 when 12 year-old Emanuel Jacques was brutally assaulted and slain and the city's innocence was forever lost.

The moral panic which enveloped Toronto in its wake saw the strip scrubbed of its most noxious tenants, including other grindhouse theatres such as the Biltmore and the Coronet. The Rio had managed to hang on, but the onslaught of home video and cable TV in the 1980's finally took their toll. Fittingly, the final line-up of 4 films (Aliens, The Naked Witch, Snake Eater II and Point Break) perfectly embodied the eclecticism celebrated at the Rio for all those years. 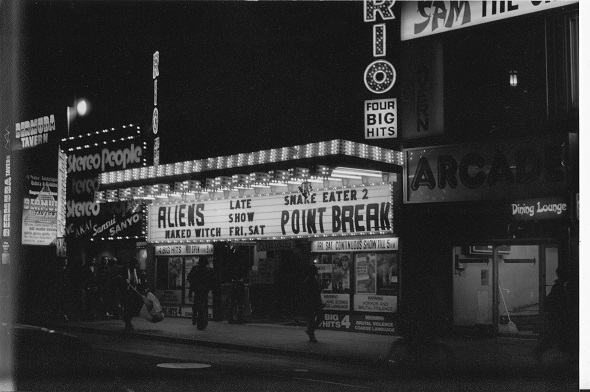 Mark Ulster, grandson of the original owners of the theatre, recalls getting a fortuitous phone call from his grandmother as it was closing down. She asked if he was interested in the large collection of movie posters and film ephemera which had accumulated over the years, as someone else had offered $1000 for the lot. Mark and his wife Linus decided to check it out for themselves. 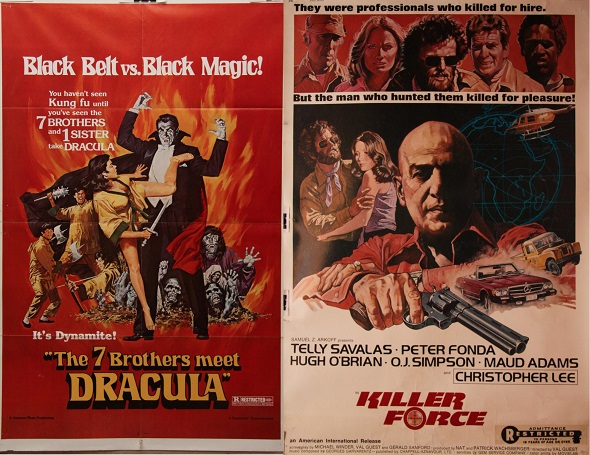 Realizing quickly there were literally thousands of posters, lobby cards and other assorted treasure, they decided on the spot to rent a truck the following day and take everything. They enlisted some friends, hustled the Rio's dusty paper library to a storage unit, than spent many years cataloging the collection using decidedly pre-internet tools such as the Leonard Maltin and Halliwell Film Guides for reference. 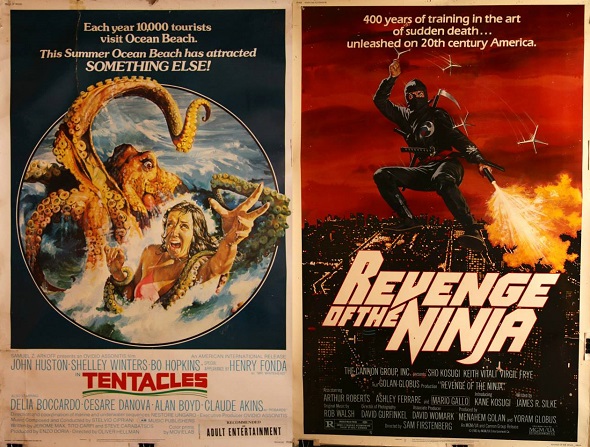 Upon discovering rarities such as original James Bond and Russ Meyer 1-sheets in mint condition, Mark recognized the haul was not only nostalgic but valuable. Thankfully he resisted the impulse to start selling off individual pieces preferring to retain them together as one collection, keeping the spirit of the Rio alive at least in the form of its edgy street marketing.

Over the years the collection moved around until finally ending up in Mark's house. In 2010, after a discussion with maverick Toronto documentarian Ron Mann (who provided some incredible footage for The Rio movie, culled from his short film about the strip), a few pieces ended up on display at Sonic Boom to help promote the release of the film Machete Maidens Unleashed. 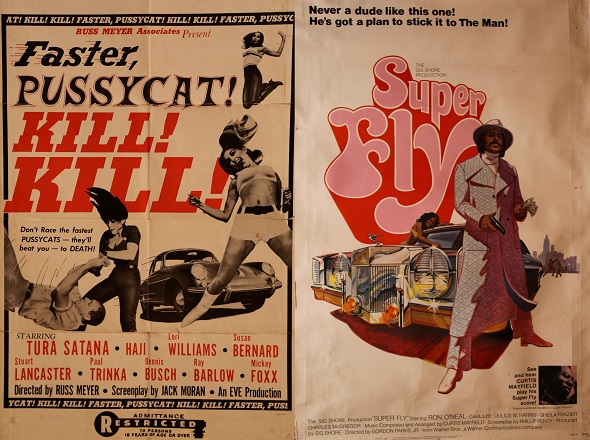 The response was so tremendously positive, Mark and Linus decided to start sharing high resolution scans of these artful artifacts on social media, where they now thrive on a well curated Facebook page and Twitter feed which offer up a tantalizing throwback to the glory days of the Rio - every single day. 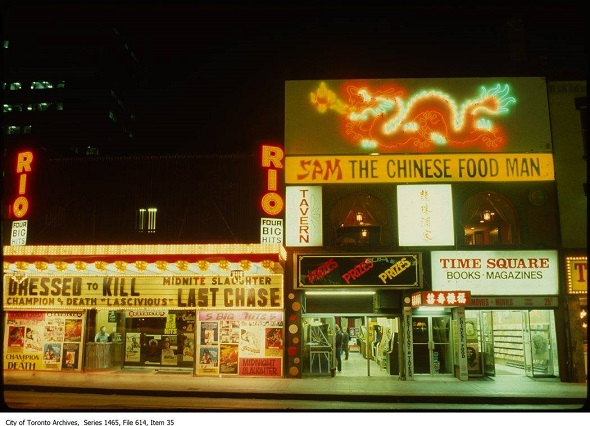 Filmmaker and music video director Joe DiBenedetto worked with Mark on an unrelated project and was blown away by Mark's story, as well the seamy tales of the Rio and Yonge Street. The two set about creating an amazing glimpse into the world of the Rio in the video posted above, and while Joe may be too young to remember the grotty days of the sin strip his passion for the lost art of movie posters certainly shines through in this remarkable piece on vintage Toronto lore. 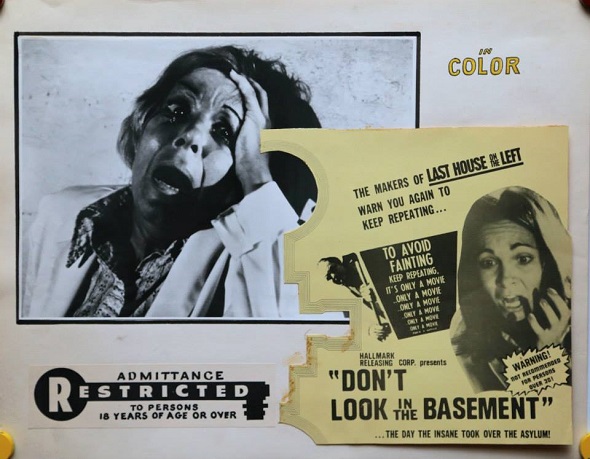 Looking at the posters Mark uploads is a wonderful, contradictory, bizarre experience: they portray a forbidden world that can never be replicated on Youtube, Blu-ray or Netflix. Ironically, the level of sex and violence in those films couldn't hold a candle to the visual mayhem and carnage we now view daily. However no one in their right mind would publicly exhibit such shocking and vivid artwork in 2015. 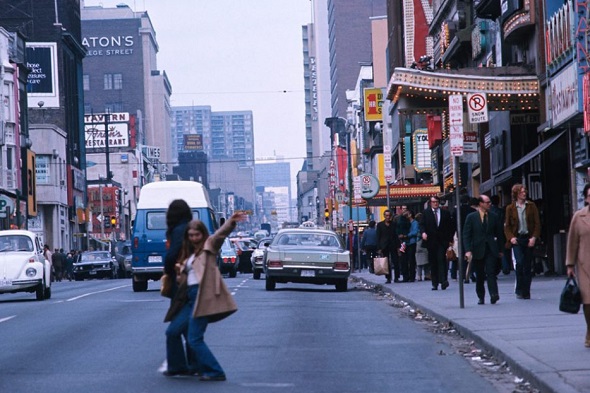 The sin strip was the closest thing our city had to the notorious 42nd Street in New York, which itself has also been exorcized in the last 30 years. Those who visited Yonge Street during that era, and who passed the hallowed rows of explicit movie posters and pulsating bulbs will probably never forget it. Nor indeed will anyone brave enough to have actually ventured into the theatre itself. Long live the Rio! 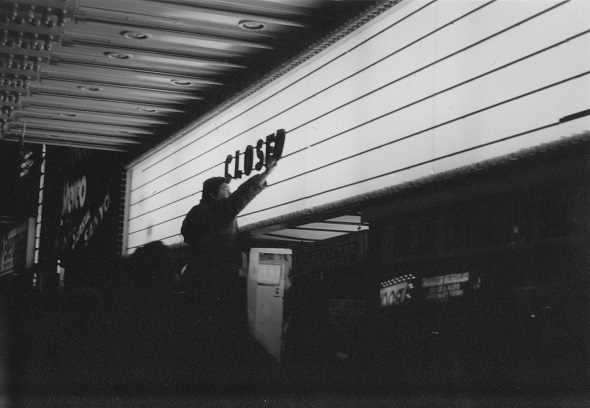 All images courtesy of Mark Ulster