It seems like just yesterday that we were celebrating ex-micro cinema Trash Palace's new life as a series at the Revue Cinema, but that chapter has come to a close this month as the cult series announced they'd be moving to Spadina cinema and DIY space Cinecycle. Trash Palace's Stacey Case laid out the reason for the move - new management and fees rising to $500 to $750 per screening - pretty clearly on Facebook, but further explained what led the series to part ways with the Roncesvalles rep cinema today.

"The deal with the old management was great: it was a 60/40 split of the door, 40% for us. No rental fee, win/win for both parties. The new management obviously didn't see it that way, so no more door split, just a straight rental fee. It's strange, a not-for-profit theatre priced us out of the game." Case originally chose the Revue for the exciting chance to leap to a "real" theatre and because it's Toronto's only rep cinema with 16mm projection, but says back alley venue Cinecycle will be a natural fit. 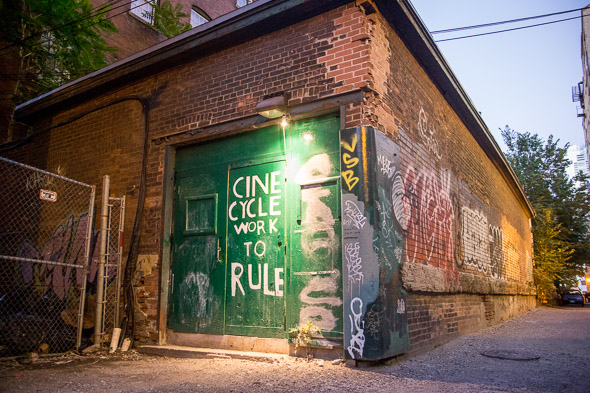 "When we left our original space, our choices were the Revue or Cinecycle. The Revue amused me because 'now we've hit the big time,' right? But it gives me great pleasure to work with Martin Heath at his space. It'll feel a lot more like it did when we had our own space. Me working the door, Dan 'The Mouth' Lovranski at the snack bar, kind of a secret space, much like what we were. We're really looking forward to it!"

As for my dream of Trash Palace taking over the Toronto Underground Cinema space, that's probably not in the future. "I'm more interested in the micro cinema concept." Case says. "It makes the experience a lot more personal." However - "My dream is for us to have our own space again. I feel confident that we will find one. We have the films, the audience, and a financial backer if we need him. The future looks bright for the Trash Palace!"

No argument there. After February 19th's screening of Melvin Van Peebles's Watermelon Man, on March 19th Toronto can catch William Castle's Let's Kill Uncle, and further screenings are plotted out until July and include Puppet On A Chain, Skip Tracer, This Is A Hijack, and Day Of The Animals.

Photos of Cinecycle by Jesse Milns