Over the past 30 years, Toronto location spotting in Hollywood films has become akin to a low-intensity drinking game. We've all seen the obvious candidates - Yonge Street mauled by THE INCREDIBLE HULK, the Gardiner re-imagined as a dystrophic freeway in TOTAL RECALL, etc. - but what about some of the low-to-no budget horror films which have showcased Toronto's creepier corners? Here's a brief look at some lesser known titles who cinematically painted the city in a slightly more blood-curdling light. (WARNING - Spoilers and scary scenes yonder!) 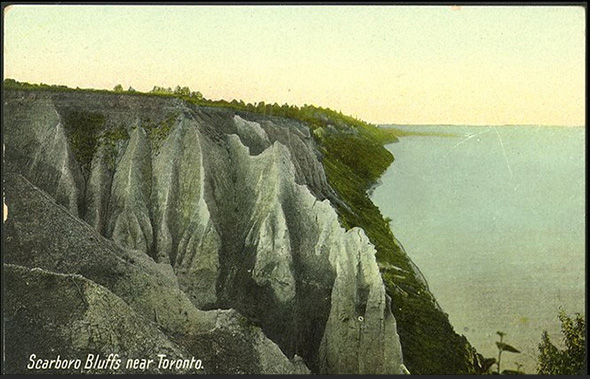 One of Toronto's best kept secrets, the Scarborough Bluffs have appeared numerous times in locally shot TV series such as DEGRASSI, NIKITA, and KUNG FU: THE LEGEND CONTINUES. Although it has never really hosted a 5 star production to serve justice to its majestic curves (although the recent epic Scarborough Bluffs selfie comes pretty close), the Bluffs did pose as a gateway to horror in a pair of schlocky 1980s b-movies. 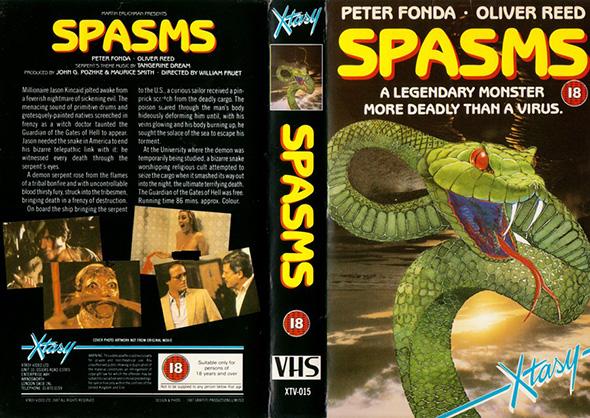 Un-fondly recalled as the movie where KING OF KENSINGTON (Al Waxman) gets eaten by a giant rubber snake, SPASMS (1983) is a classic video nasty seen only by those adventurous VHS renters who squatted in the Horror section of their local Mom & Pop video store.

Sporting an A-list cast (Peter Fonda, Oliver Reed - presumably working for drink money, Marylin Lightstone), the "plot" of SPASMS involves boffin scientists exporting a behemoth serpent from a remote African island to an unnamed American University (where it proceeds to eat everyone). The Bluffs does a yeoman's job as standing in for the remote African island from which this demonic monster was poached:

Best known as the final part of Jamie Lee Curtis' breakout "Scream Queen" trilogy (following John Carpenter's HALLOWEEN and TERROR TRAIN), PROM NIGHT follows the basic slice and dice formula of a masked killer avenging a historic wrong doing on a special occasion (if the title didn't tip you off, this one being Prom Night). 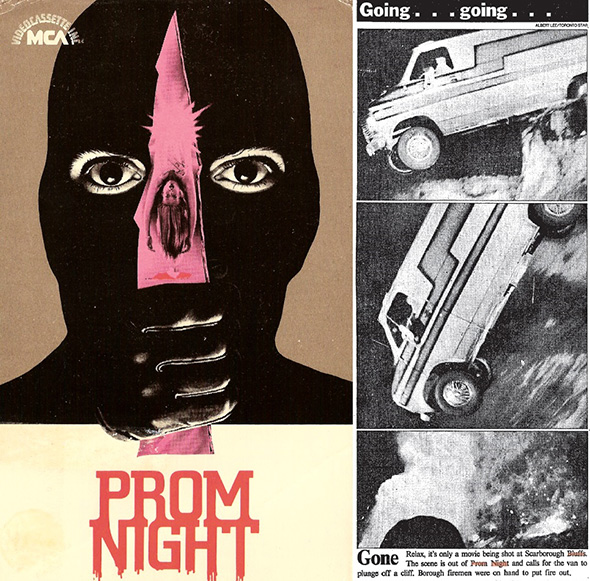 Don Mills Collegiate Institute doubled for the on-screen "Hamilton High School", while the Bluffs appeared in a memorable kill scene involving an out of control van (covered by the Toronto Star, no less.)

For years only available in a poor quality version that looked as if Vaseline had been smudged across the camera lens, this title has been re-appraised upon its recently restored Blu-ray re-release. The van scene, however, remains slightly more comedic than frightening.

Another recently released Blu-ray - DEADLY EYES aka THE RATS (1982) - has been garnishing some lost love after being rediscovered and restored by the flawless cult DVD label Scream Factory. Based on James Herbert's pulp horror novel "The Rats", DEADLY EYES is chock full of Toronto locations being terrorized by the crazed titular rodents:

Canuxploitation.com creator, curator and historian Paul Corupe describes DEADLY EYES as "a sleazy camp monster movie from ENTER THE DRAGON director Robert Clouse, but a certifiable good time if you want to see giant rats (or in this case dogs in rat costumes) running around the Lower Bay Station and the old Golden Harvest Theatre on Spadina attacking people."

In addition to tearing up a Bruce Lee marathon at the Golden Harvest, the Rats spoil a greasy local Politician's unveiling of what his populace demand - Subways, subways, subways:

Asked about his favourite Toronto horror films, Corupe offers up "THE MASK (1961). Canada's first horror film - It's about a psychiatrist with receives a ritual mask from a patient who dies, and when he puts it on he experiences hallucinatory visions (shot in 3-D) that drive him to murder. It's an ambitious film, with great surreal dream sequences of sacrifices, fireballs and snakes and at least part of it was shot at the Royal Ontario Museum - you can see the totem poles in the stairwells".

The University of Toronto campus is spooky enough on its own, already overflowing with ghost stories and student mayhem. 1986's stalk and slay fest KILLER PARTY (also directed by William "SPASMS" Fruet) taps into some of that U of T tension and manages to make even the surrounding neighborhoods as hellish as Haddonfield:

A CHRISTMAS STORY director Bob Clark also captured the campus' unsettling nuances in BLACK CHRISTMAS (1974). "It only features a handful of Toronto locations, mostly around the University of Toronto campus, but it does a notable job in actually feeling like the girls in the sorority terrorized by the unseen "Billy" are actual U of T students that attend classes, thanks to a few well-placed shots of archways and classrooms." notes Corupe.

While on the subject of scary phone calls, MURDER BY PHONE aka BELLS (1982) remains one of the great forgotten Toronto horror films. Has there ever been a better manifestation of eerie pay phone calls on a TTC platform?

Also conveniently lost to time is the camp classic YETI: GIANT OF THE 21st CENTURY, a shameless rip-off of the 1976 remake of KING KONG, which features an oversized Yeti stomping around Toronto and even taking in the sights at City Hall.

Still the most famous Toronto horror film is local maestro David Cronenberg's masterpiece VIDEODROME (1983), a prophetic and damning indictment of early 80s UHF and video tape culture. According to Corupe, "VIDEODROME is probably the ultimate Toronto horror film, because so many elements are intrinsically tied to the city. Not only is the film actually set here, it's a thinly veiled story of the rise of Moses Znaimer and CityTV in the early 1980s, clearly inspired by the "Baby Blue" movies and other local late night programming happening at the time.

Plus there are so many familiar locations in the film, from the Factory Theatre to the Financial District, Queen Street East to Cherry Street. Often watching a Toronto-set horror film means ignoring American flag props and disjointed geography, but VIDEODROME actually feels like it's taking place in a real Toronto without dropping a bunch of obvious landmarks in your lap. Plus it's a major accomplishment as a horror film, perhaps one of the finest genre films of the decade."

While almost all of Cronenberg's films are set and/or filmed in Toronto, THE BROOD (1979) holds a special place for turning a mundane Hogtown location into a site of sheer horror. In a nutshell, the story involves a messy divorce in which a psychologically disturbed mother controls a hoard of strangely deformed children who attack others at her will. 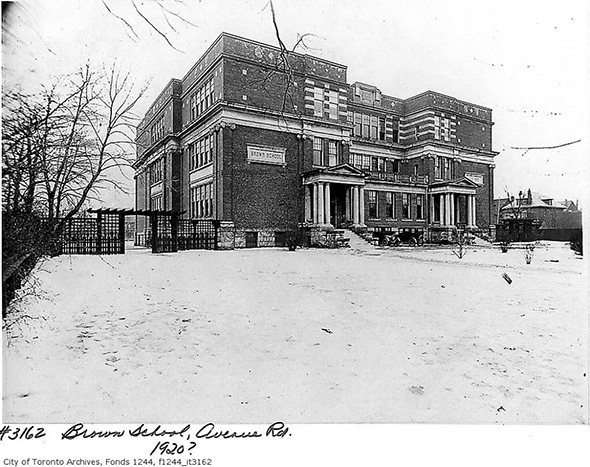 Elijah Siegler, a child actor who played one of the survivors of the attack and also attended Brown in real life, recalls "The interior was a kindergarten classroom and it hadn't been changed much from how it normally looks, so it was truly a bizarre experience to see a woman get beat to death by mutant dwarves. The playground was obviously the same playground where I would play STAR WARS and SUPER FRIENDS with my classmates. Brown School was a great elementary school to go to but looking at it in THE BROOD I see it's such a modernist, ugly building, which fits the film's tone."

Another innocuous location triumph appears in horror master John Carpenter's IN THE MOUTH OF MADNESS (1993), where the R.C Harris Water Treatment Plant becomes a lunatic asylum, while the film's apocalyptic finale plays out at the Bloor Hot Docs Cinema.

Asked if there are any suitably terrifying Toronto locations which have not yet been exploited on screen, Corupe suggests "The Canada Linseed Oil Mills building? Don Jail and the Lakeshore Psychiatric Hospital are also good choices but have appeared in a few films. It would also be interesting to see something set about people getting lost after hours in The Path, or perhaps that's just a projection based on my own poor navigation skills."

More recently, big Hollywood horror titles filmed in and around Toronto include the SAW series, the RESIDENT EVIL series, URBAN LEGEND, JASON X (2001) FREDDY VS. JASON (2003), and BRIDE OF CHUCKY (1998). Hosting another godfather of modern horror, George Romero's LAND OF THE DEAD (plus the 2004 remake of his classic DAWN OF THE DEAD as well), no doubt makes Toronto the second Zombie capitol of the world after Pittsburgh.

Aside from some of the rarer titles mentioned above, we ask Corupe if there are any other "lost" Toronto horror films, begging to be re-discovered and celebrated by local horror enthusiasts?

"The only one I know of is CREATURE OF COMFORT (1968). Made almost a decade before the infamous U.S. production DEATH BED: THE BED THAT EATS, this low-budget film is supposedly an anthology horror film about a killer bed comforter that absorbs evil people. Donald Pleasance has a cameo, apparently. It was shot in Toronto, but since it's never been screened, we don't know whether any recognizable locations were actually used, but I like to imagine that the comforter is first sold by a Leon's or Bad Boy outlet. Who's better for deadly home furnishings? Nooobody!"

With thanks to Paul Corupe and Elijah Siegler