There's a subway car poking through the ground on Yonge Street, but don't worry, this isn't a nightmare at the corner of Elm Street -- it's Godzilla. The apocalyptic scene, which includes a crashed plane and wrecked New York City cab, is part of an elaborate promotional backdrop for the upcoming Canadian release of the science fiction monster film. And yes, the train car is (or was) real.

Patrick Little from Juxta Productions, an advertising studio that specializes in constructing complex sets (the group built the Daybreakers Blood CafĂŠ at Queen and McCaul in 2010,) says his company purchased the retired car for the value of its scrap aluminum shell.

"It was cut in half in Hamilton and the bogies and steel wheels were removed, which reduced the weight substantially," he says. "It was then shipped by wide load - it's exactly 10 feet wide - to Picture Vehicle Specialties in Scarborough. They hoisted it from the flatbed and cut it into a triangular shape so it can sit flat on the ground."

The chunks of movie concrete arranged around the base are made of painted wood and foam. 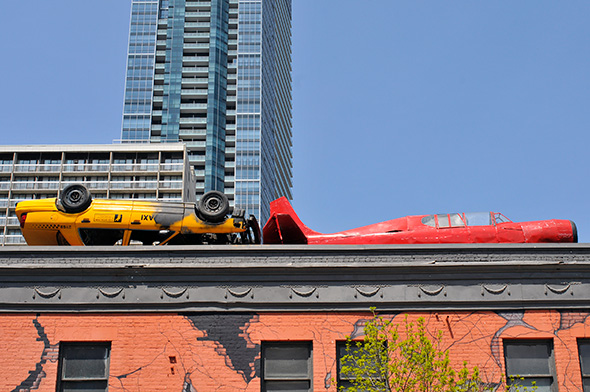 The Yonge and Elm location was chosen based on the width of the street and sidewalk. The city doesn't allow the right of way to be completely blocked for filming or other brazen promotional purposes. Much of the set was installed last night on the corner of Yonge and Elm, next to Aden Camera, and there more pieces will arrive in the coming days.

Gareth Edwards, the director of Godzilla, and some of the cast will be appearing at the disaster scene Thursday night ahead of the movie's premier at the Yonge-Dundas IMAX. Destruction enthusiasts will be allowed to pose with the wreckage until Sunday, when the whole thing will be dismantled.

Warner Bros. is also producing a short film about the promotion.

Godzilla, which was mostly shot in Vancouver and Hawaii, comes out May 16.