10 things to see at the Images Festival

The Toronto Images Festival, North America's most expansive film and media art event, returns for its 27th year this Thursday. Featuring 10 days of installations, performances, gallery exhibitions, and screenings of experimental shorts and features, it's a reminder that cinema is first and foremost an art, and serves as a perfect palate cleanser before we're bombarded with another summer of big-budget blockbusters.

Given the festival's transmedial sprawl, it's virtually impossible to see everything it has to offer; even if you do have the physical and mental stamina, there just aren't enough hours in the day. We've identified 10 of the events and programs that look especially enticing this year.

Andrew Lampert's Making Space For More (Friday, April 11, 6pm; Art Gallery of Ontario)
Essentially a dinner party, but unlike any you've ever experienced. Located at the AGO's Frank Restaurant, indulge in chef Jeff Dueck's gastronomic inventions as you listen to legendary Toronto artist and filmmaker Michael Snow perform live music, while filmmaker and archivist Andrew Lambert hosts and curates "a view into the AGO's never-before-seen, endlessly fascinating archive." A three-hour event, but feel free to arrive/depart whenever you're ready. To make reservations, go here.

A collection of drops (Friday, April 11, 9pm; Jackman Hall)
This is the annual "locals" survey, where you'll find most of the Toronto-based artists featured in the festival. Curated by Toronto artist Johnson Ngo, the program offers a steady gradient of familiar faces (Chris Kennedy's Brimstone Line played in TIFF's Wavelengths program last September, while John Kneller's Axis appeared in one of Kennedy's editions of The Free Screen at TIFF in February) and emerging new voices.

Curtains (Apr 12-May 24; InterAccess Electronic Media Arts Centre)
Slowly but surely, Ken Jacobs' dream of realizing 3D's potential in the art world is becoming a reality as more and more artists start to explore the vexed, "gimmicky" medium. Now, it might seem redundant for an art installation - typically already three-dimensional - to call upon the powers of 3D glasses (anaglyph red/blue 3D, in this case), but that's exactly the approach Oakland-based artist Lucy Raven takes in her look at contemporary movie-making in this piece.

A Conjuring, A Slow Acting Poison (Sunday, April 13, 6:30pm, Jackman Hall)
This rich selection of work from various parts of the world is fixated on the idea of conjuring - of spirits, of visions, and of histories. Included is Karen Yasinksy's haunting Life is an Opinion Fire a Fact, which you may remember from the Regional Support Network's Baltimore-Based program, and Joshua Solondz's hypnotic Prisoner's Cinema, meant to evoke the light displays prisoners see when confined to dark space for extended periods of time. 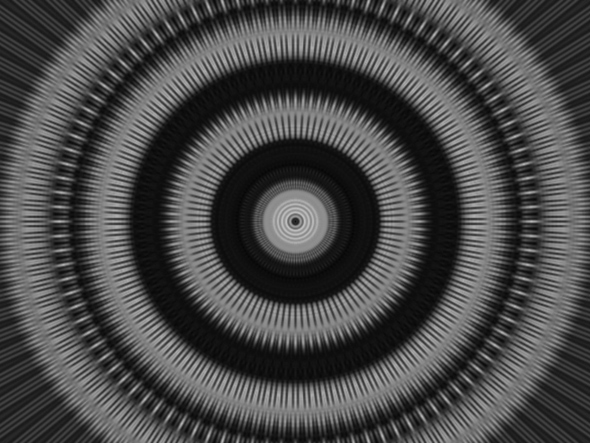 It For Others (Sunday, April 13, 8:30pm; Jackman Hall)
This program is a diptych of sorts, juxtaposing Chris Marker and Alain Resnais's 1953 film Les statues meurent aussi beside Duncan Campbell's new, short feature, It for Others. Campbell's film takes Marker and Resnais's collaboration as a point of departure in his rigorous treatise on "the life, death, consumption and circulation of objects and images." Not to mince words: when a Marker or Renais film screens on film (16 mm, here), you schedule your life around it.

Double Nature - International Student Showcase (Monday, April 14, 6:30pm; Jackman Hall)
Don't let the word 'student' fool you; this is a bona fide collection of films coming to Toronto from as far away as Germany, the U.K., Argentina and Brazil, including Ana Vaz's The Age of Stone, which screened at the New York Film Festival last October, and reveals an architectural artifact that has to be seen to be believed.

Bloody Beans (Monday, April 14, 9pm; Jackman Hall)
Where Campbell evokes Marker and Resnais, director Narimane Mari situates her film in the light of the work of Jean Vigo and Jean Rouch. Co-presented by Cinema Scope magazine, Bloody Beans is an imagined ethnography that sees a group of Algerian children kidnap a soldier, among other magical interludes. Made a big splash at Copenhagen's International Documentary Film Festival.

OPEN SCREENING! (Tuesday, April 15, 10pm; CineCycle)
In which you bring a film - ten minutes or less, film or digital, new or old, work-in-progress or finished, your own or someone else's - and watch it in a free, open, and social atmosphere of peers and strangers, artists and amateurs. From my experience, the work played in these open screenings can be just as inspired and invigorating as what's been programmed in the actual festival. Don't have something to bring? Come anyway (though it's not too late to toss something together)! A great, fun way to stay up all night.

Two Hours Two Minutes (Wednesday, April 16, 8:30pm; Jackman Hall)
To echo what I said above: when a work by Jean Eustache screens on film (this one on 35mm), you schedule your life around it. Part of why this program - centered around the concept of voyeurism - runs so long (check the title) is that it features, as its core, Eustache's impossible to see, 50-minute 1977 film Une sale histoire, in which a man tells a tale of discovering a peephole into a cafe's ladies' room, becoming entranced by the exposed female he could see. 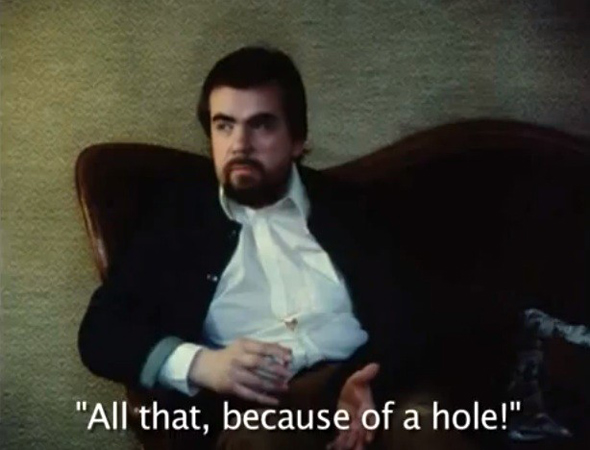 From Deep (Saturday, April 19, 9pm; Jackman Hall)
The avant-garde video essay meets Steve James's Hoop Dreams. Featuring cameos by Run-D.M.C., Adidas, Michael Jordan, Woody Harrelson, and Magic Johnson - which is to say, 1980s America in a nutshell. To best prepare yourself for this closing night event, be sure not to miss the film's director Brett Kashmere speaking with Canadian artist Jennifer Chan two days before the screening.

Lead still from From Deep.