Much like last year's Charlie Victor Romeo, which was based on air traffic control transcripts for six fallen commercial airplanes, Public Hearing is a word-for-word reenactment of an actual public hearing about "the proposed transformation of an Allegany, NY Wal-Mart into a Super Wal-Mart." Granted, perhaps not the world's most exciting synopsis, but the results have earned comparisons to American documentary masters Frederick Wiseman and Emile de Antonio, so I'm willing to take the chance. Shot on black-and-white 16mm film (!), and composed entirely of close-ups; projected in HD. 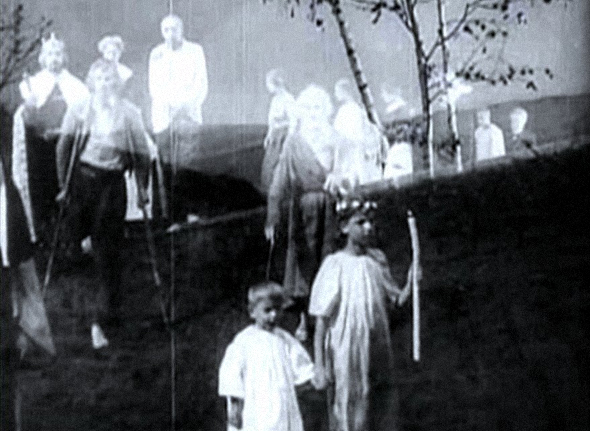 (Sunday, February 23 at 4:15PM; Revue Cinema)
From the silent film legend who brought us Before Metropolis and then one of the first sound masterpieces, M, comes one of his earliest masterpieces: 1921's Destiny, one of the first films to really signal that Lang was going to be one of the great filmmakers. "Equal parts fairytale and fantasy, Destiny tells the tale of a young woman granted three chances by a world-weary Death to save her lover from the afterlife. Hugely influential, it even inspired a young Alfred Hitchcock to pursue a career in film." Piano accompaniment will be provided by the invaluable William O'Meara.

The Festival of New Spanish Cinema (FoNSC) is now six years old, but this is the traveling show's first stop in Toronto. The self-described leading showcase in North America for "the best in contemporary Spanish film" brings Toronto five premieres, including "the latest, most exciting films and allowing you to discover and share your love of Spanish cinema." More of a month-long series than a festival, FoNSC will screen a film every Wednesday evening at The Royal until the end of March, beginning with A Gun in Each Hand (Wednesday, February 26 at 7PM), a comedy about eight men who are all experiencing "a masculine identity crisis."

Hayao Miyazaki is so popular that the only film series to have played at the TIFF Bell Lightbox twice in its only three-and-a-half year history is the Studio Ghibli retrospective, which sold out practically all of its screenings in 2012, and then did so again last December, a mere 18 months later. Sure, not all of the films screened were Miyazaki's, but let's not kid ourselves: How many other Ghibli filmmakers' retirement announcements made front page headlines on non-entertainment media outlets?

Naturally-as he already did once before-Miyazaki has since recanted his vow to make The Wind Rises his final film, meaning everyone who called this the perfect note for him to go out on will have to, I guess, wait for the next perfect note. As it stands now, this fictional biopic about Japanese World War II plane designer Jiro Horikoshi will just have to go down as another late period feather in the animator's cap - one, it should be mentioned, that is among Miyazaki's least surreal or fantastical films.

Lead still from The Wind Rises.