That time when the movies came to Toronto

In a dimly-lit Yonge Street basement 117 years ago this month, the first motion picture ever shown in Toronto flickered on to a whitewashed projection screen before a small group of expectant patrons at Robinson's Musee, a discount curios emporium sandwiched among fur workshops and portrait studios.

For just 47 seconds, the flickering light from the figures of May Irwin and and John C. Rice shone back on the faces of a handful of excited customers as the film was noisily devoured by a Vitascope, one of the age's first movie projectors.

The device, championed by Thomas Edison and only recently available to the public, tugged in film, held it for the briefest moment in front of a lens, then spat it back out into a laundry basket.

The movies had landed in Toronto. 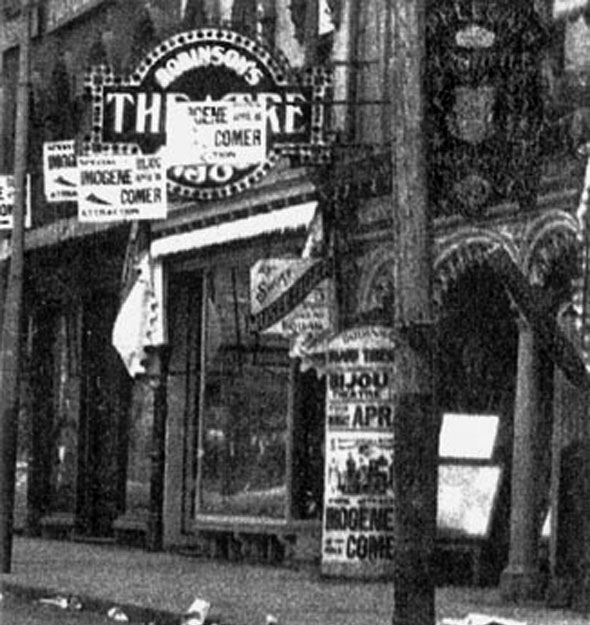 Robinson's Musee was located in a converted shopfront at 91-93 Yonge Street, roughly mid-block on the east side of the road between King and Adelaide. It opened under the stewardship of American curios promoter M. S. Robinson on a chilly December 8, 1890, as the self-described "leading family resort of the Dominion."

The business - an imitation of the famous Barnum oddity museum in New York City - hosted a eclectic mix of touring productions: artwork, animals, musicians, comedians, dance acts, artifacts - anything that would draw a crowd, but no clear photo appears to exist of its exterior.

Typical fare included Barney Baldwin, "the only man living with a broken neck" ("scientists and physicians puzzled,") a "midget queen," a troupe of Japanese "wonder workers," a set of wax figures, a prairie dog village, an ancient Aztec mummy, and a Punch and Judy show scattered in various rooms, all accessible for 10 cents.

The Musee also had a top-floor menagerie of animals, complete with an aquarium and an aviary, and a small auditorium, Robinson's Musee Theatre, at the back with enough seats for at least 100 people. 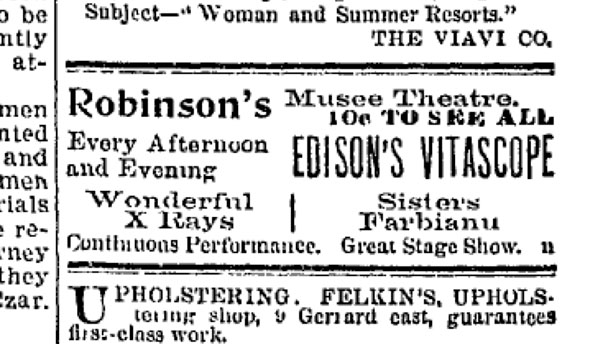 Robinson appears to have left the city shortly after establishing the museum, leaving the day-to-day running to a series of managers. One, named "Young," was sued in April, 1896 by Flora Stuck, "The Three-Headed Girl," after she was exposed as a fraud and heckled by a particularly unforgiving audience, much to her embarrassment.

(One can only speculate what happened, but I like to imagine two painted papier-mâché heads flopping to the floor in the moments before Stuck had to make her hasty escape.)

The building's namesake returned later that year, possibly as a result of the controversy around Young and Flora Stuck, and organized a grand re-opening for August 31.

The event would feature two Toronto firsts: the first motion picture screening in a basement area named "Wonderland" and an installation of X-rays taken by the pioneering Wilhelm Konrad Röntgen, a German physicist who would go on to be the first ever recipient of the Nobel Prize for Physics in 1901.

"Nothing cheap except prices," the advert read. 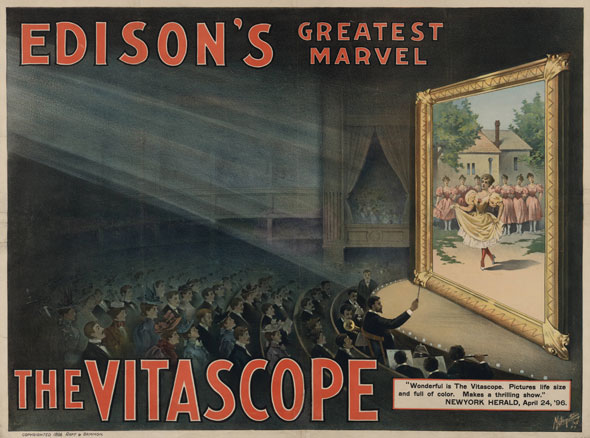 The Vitascope, the simple device used to screen the film, was one of several early touring projection systems that often showed short "actualities," brief snapshots of an exciting activity: a steam train in motion, a few seconds of a boxing match, water crashing over Niagara Falls, that sort of thing.

The device itself was patented by Thomas Armat in 1895 and promoted by Thomas Edison as a medium for his short Kinetoscope pictures in the years before he was able to develop his own system, the Projectoscope (for this was a time of practically countless "scopes",) later in the 1890s.

Film, loaded on to a reel and fed through a series of pulleys, was dragged in rapid, choppy succession in front of a electric lamp that projected the image on to a wall or screen. The films were in black and white (despite generous advertising material suggesting otherwise) and silent. 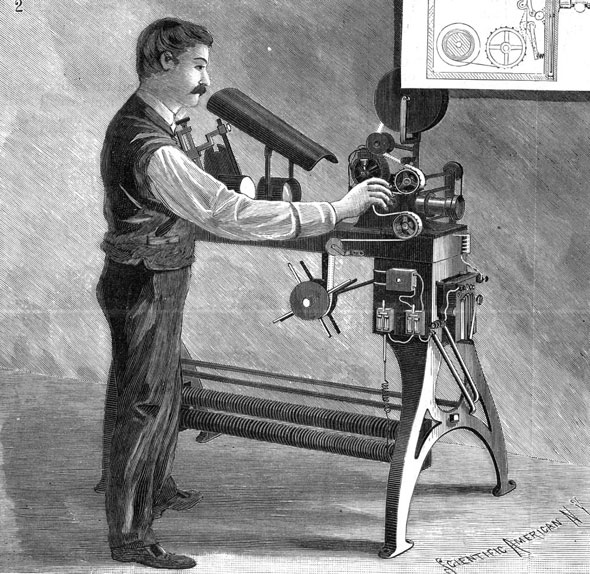 Edward Houghton, a touring showman, brought the Vitascope to Robinson's Musee a few months after an outdoor presentation of the system in Ottawa had been so well received it generated a letter of congratulations from Thomas Edison to the promoters, the Holland Brothers.

At the Toronto Industrial Exhibition, as Houghton installed the Vitascope at the Musee, a rival company were hurriedly screwing together a portable Cinématographe Lumière, a combination camera and projector developed by French brothers Auguste and Louis Lumière, and came close to snatching the title of first motion picture from Robinson.

"It was a race from the first," Houghton is quoted as saying in the 1930s by Peter Morris in his book, Embattled Shadows: A History of Canadian Cinema, 1895-1939.

"A Frenchman, named, I think, Lumiere, was opening the Cinématographe across the street in an empty store. Old-timers will remember the excitement ... you paid a dime to get in to the Musee which was a museum of freaks and such. Then you paid another dime to go downstairs and see the pictures."

History tells us Houghton and Robinson prevailed, and the first movie - The Kiss - was playing a full day before the Cinématographe was up and running.

(Morris later points out Houghton misremembered several points - the Cinématographe did indeed open the next day at the industrial show but only later moved to a vacant store opposite the Musee.) 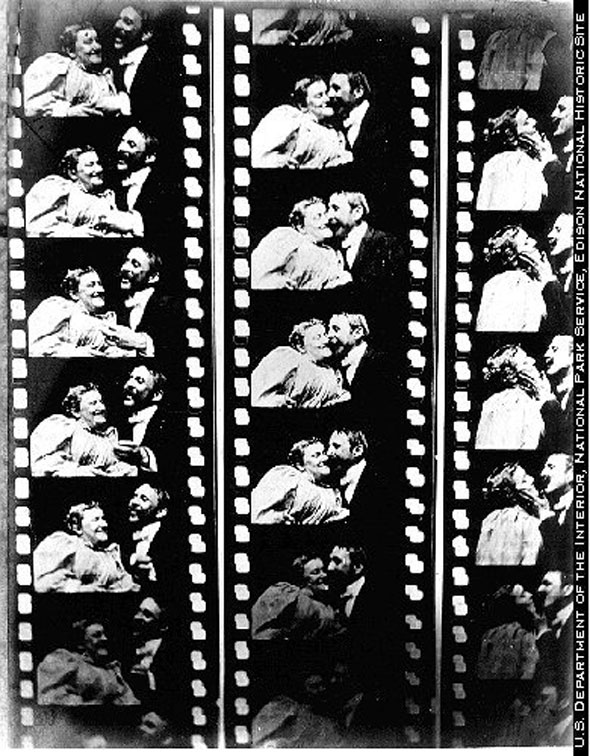 The year before the Toronto movie race, Edison had hired Broadway actors May Irwin and John Rice to act out a goofy kiss scene from the popular farce The Widow Jones at his Black Maria movie studio in West Orange, New Jersey.

Irwin was a popular comedian and vaudeville performer of the day. She started out as a "coon shouter," singing negro melodies in the American midwest with her sister Flo, and later earned the title the "Dean of the Comediennes" from critics. She would go on to perform for president Woodrow Wilson during the first world war.

A review of her role as Beatrice Byke in The Widow Jones published in the New York Times in 1895 described Irwin as "round, blonde, [and] innocent looking - when her mood is not reckless - as pink and white and as blue-eyed as ever."

Packaged as "The Kiss", the movie was distributed by the Edison Company for Vitascope audiences and became an instant hit among early motion pictures. "They get ready to kiss, begin to kiss, and kiss and kiss and kiss in a way that brings down the house every time," read Edison's own synopsis.

If the first audience was shocked, stunned, or appalled by the spectacle, it wasn't recorded in Toronto's daily newspapers except for a few brief notes that marked the event a success. The Globe and Mail described the Musee as "crowded," though that would likely have also included those viewing the Röntgen X-rays.

We do know, however, that the kiss had been met with raised eyebrows elsewhere for its risqué display of affection.

"The spectacle of the prolonged pasturing on each other's lips was beastly enough in life size on the stage but magnified to gargantuan proportions and repeated three times over it is absolutely disgusting," an un-named and particularly prudish critic is widely quoted as writing after seeing the film.

The Toronto Vitascope show ran for at least a month, showing a different Edison short each week. In September, a film showing Niagara Falls became the first Canadian landscape to be shown on a Canadian screen. Off the back of this success, a more permanent movie installation that used the British Animatographe system was arranged for December of that year.

Edison went on to play an important role in the development of motion pictures. He filmed more real-life scenes that promoted his own inventions, particularly those related to electricity, and derided the work of his perennial rival Nikola Tesla.

One film, perhaps Edison's most infamous, showed a circus elephant named Topsy being shocked to death by a high-voltage alternating current, a system promoted by another foe (he had many) George Westinghouse.

Topsy had killed three trainers - including one that tried to feed her lit cigarettes - and was deemed a threat to humans by her owners at Luna Park in Coney Island.

She was fed carrots laced with cyanide moments before Edison sent 6,600-volts coursing through her body. She suddenly stiffens and tips rigid to the ground as smoke pours from the metal restraints strapped to her body. It's still shocking to watch more than 110 years later.

Back in Toronto, Robinson's Musee Theatre was renovated and re-named The Bijou Theatre in November of 1896. The balcony seats were raised and renamed "the family circle" and the curios section of the building closed down. It continued for roughly a year before a fire damaged the building and it was taken over by Jerry Shea as a high-class vaudeville house, and renamed for him.

The same building was also known as the Strand movie house before it was eventually converted to offices and then demolished entirely. According to Peter Morris, the author of Embattled Shadows, the decorative entrance to the Bijou Theatre was still visible until its last days.