One hundred thousand people. That was the official number of attendees given for Fan Expo 2013. One hundred thousand people swarming the Metro Toronto Convention Centre in nerdy shirts and elaborate costumes, bags of merch in one hand, cameras in the other. Parents, grandparents, children, humans of all shapes, sizes, races, creeds, coming together to celebrate the flights of fancy of yesteryear, today, and tomorrow.

And is it not just the best feeling in the world?

So went Fan Expo 2013. With the MTCC's North and South buildings overtaken to accommodate the throngs of fans, it not only allowed for more vendors and guests to get set up, but also freed up a lot of space for people to move around. Prior years had seen fans confined to one of the two buildings, and the word "sardines" sprung to mind more often than not. This year, however, was certainly the biggest and most spacious Fan Expo I've been to. But was it worth the price of admission? At a whopping $115.00 for a full weekend pass, and daily passes ranging from $25 to $50, it has to be. Right?

Let's do the tally!

YEP. This was the year when Fan Expo first put in a Sports section. At first, I was worried about what this would mean. Terrifying images of muscular jocks strong-arming their way through the convention halls, delivering wedgies to whoever was in sight filled my mind. However, as I walked through the Sports Zone in the North building, I couldn't help but feel like they belonged there. Gazing out at the sea of trading cards, rows of signed baseball bats, posters, pins, books, and guides made me realize that, really, sports fans aren't that different from the rest of us enthusiasts. So, it was a treat to have them show up, and it's going to be grand seeing them each year! Plus, who wouldn't want to pose with a cardboard cut-out of the Stanley Cup? 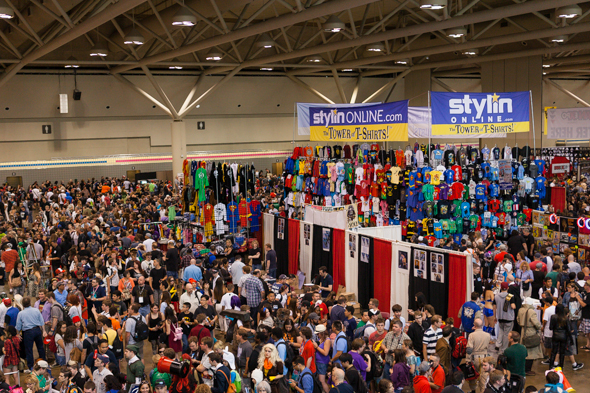 Walking through a convention Fan Expo is always a treat in itself. Retailers from all over set up shop in the South Building's Dealer's Room, from Silver Snail and Labyrinth to Hamilton's Big B Comics and Mississauga's Gotham Central. There, fans could find any comic, figure, fake weapon, accessory or shirt they wanted. More were found in the North Building, close to the Sports Section and the areas occupied by the Doctor Who Society of Canada, the Toronto Steampunk Society, the 501st Legion, and replicas of KITT and KARR from Knight Rider and the 1989 Batmobile. One was also likely to come across scores of cosplayers gathering for one photo-shoot or another, and people lining up for autograph sessions with Fan Expo's many special guests. 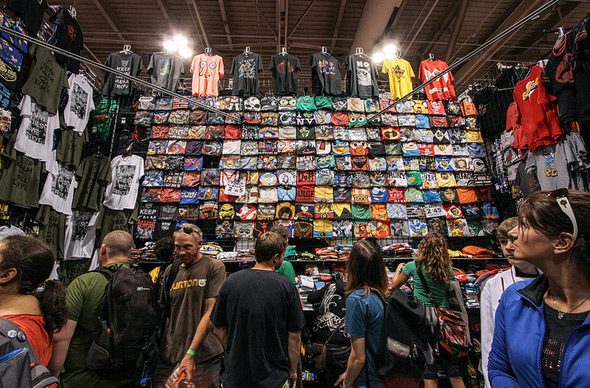 Plus, how could you say no to the booths set up by big companies? Demos for upcoming video games and the new Playstation 4 surrounded one section. Showcase had a section promoting their new shows, and Rue Morgue had fake fetus bottles and a make-up space for anyone wanting to turn into Frankenstein for the day. Plus, Lego had a massive display that included a giant Yoda and a Shire roughly the size of a Winnebago. It even had a bench. That you could sit on. You could sit on Lego. Move over, Ikea, I'm having my friends' kids furnish my new apartment.

For me, though, it's all about the Artist's Alley. It's all about getting the chance to meet amateur and professional creators, seeing their work and chatting with them about the arts world. This year saw a plethora of artists, musicians, and filmmakers, including (and this is the part in a conversation when I would take a very, very deep breath): writers Brian Evinou and Phil McClorey; sculptor Luis Arellano; Sanya Anwar of 1001; Ricky Lima and Shane Heron of Black Hole Hunters Club; illustrators Ted Rankin, Brian Hoang, Lamin Martin, Tyrone and Alana McCarthy; the teams behind Spinnerette and Heroes Of The World; the creators of the webseries Ghouligans, One Hit Die, and Guidestones; and the, The, THE animator of He-Man, She-Ra, Scooby-Doo, and Thundarr the Barbarian, Tom Cook himself. That last one was particularly spellbinding. I admit; I almost asked to elope with him. 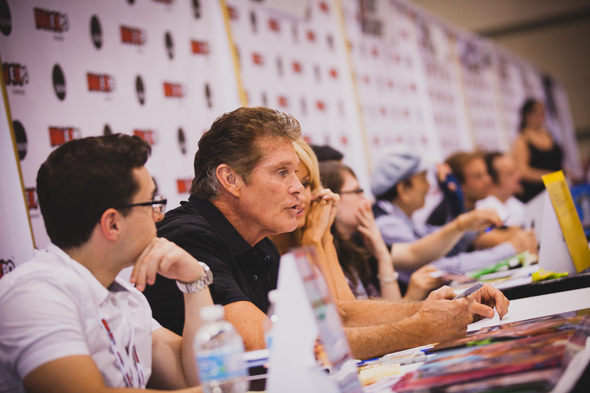 If you don't have the money to line up for an autograph session with any of the big name stars, then there's plenty else to do while skulking around Fan Expo. Game tournaments of the board, card, and video variety were everywhere, LARP troupe Nero hosted a miniature arena in the South building, and there were screening rooms for up-and-coming films and webseries, such as One Hit Die and Rue Morgue's flagship film The Last Will and Testament of Rosalind Leigh.

And, of course, there were the panels. During my time there, I had the chance to attend several of these. I bore witness to two sketch-duels - one between Lee Bermejo and Ryan Stegman, and another between Yanick Paquette, Stephen Platt, Andy B, and Cary Nord - some Q&A sessions with The Birthday Massacre, Mike Mignola, and Yuu Asakawa, as well as some fan-run panels. Of the latter, that included panels about the Lolita and Steampunk movements, and an AMV (Anime Music Video) Gameshow. 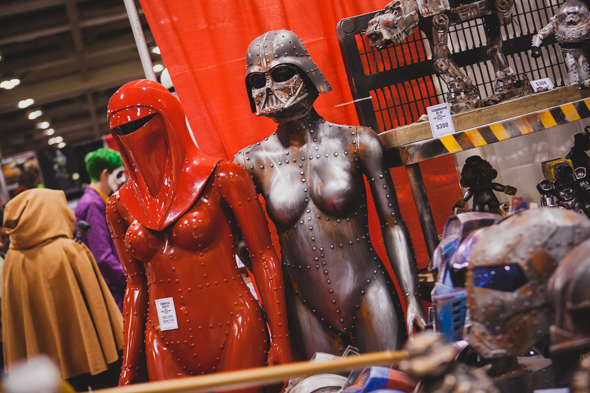 One of my favourites of the bunch, however, was the Women In Comics panel, hosted by such industry veterans as Sara Richard, Louise Simonson, Kathryn Immonen, Becky Cloonan, Amy Chu, and Ellie Pyle. Our intrepid panels covered everything from women in the comics industry to women in mainstream comics, and how current and future writers and creators can break away from the old values established and maintained in major companies. Sadly, the wave of misogyny permeating in the convention circuit and the comics industry is a toxic one indeed. As such, this panel in particular was the breath of fresh air an unfortunately macho industry needs. Oh, yes, and support the Sweaters For Starfire campaign Sara Richard proposed at the panel.

Some local eateries decided to make some themed foods for the event. Crowds gathered outside the Cashew and Clive to try new cinnamon buns: The Princess Leia, The Darth Vader, and the Cinna-brain. I tried out the Cinna-brain while I was there, and found it a nice surprise. Strawberry sauce spilled over the white-glazed bun, evoking the image of blood and pus, and blended together in a maliciously delicious combination. Meanwhile, Hank Daddy's Barbecue provided con-goers with The Rebel Burger and The Imperial Burger. I had the chance to try the Rebel, a bizarre combination of cheese curds, granny apple slices, and honey mustard served on a bright green bun. Sadly, it did nothing to increase my midochlorian count. I'm crying as I write this. 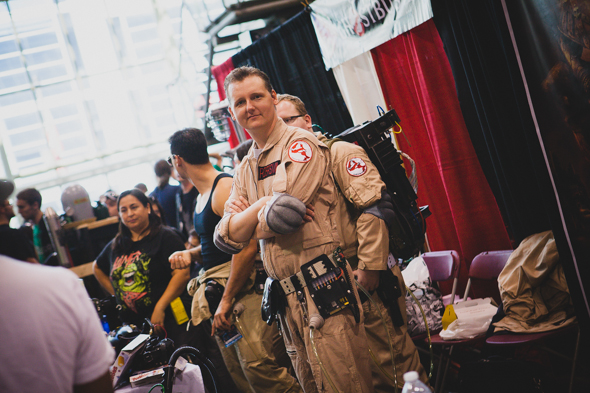 Okay, yeah, the insane prices and the two-hour line-up might be a deterrent for people who are short on money and time, but even if you exist outside the One Percent of geeks, there's a chance you'll have fun at Fan Expo. There's certainly plenty to do, even if it's just for one day (which might be favourable for the cash-strapped). So, if you have a weekend free next year, save up and give it a shot. It just might be worth it. 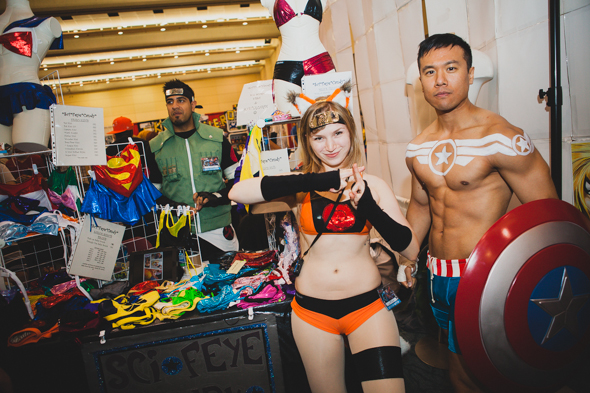 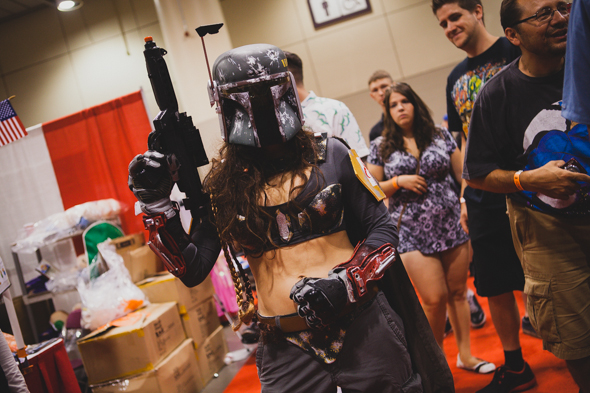 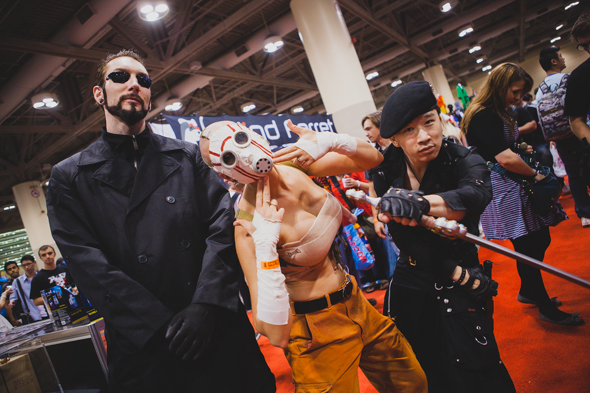 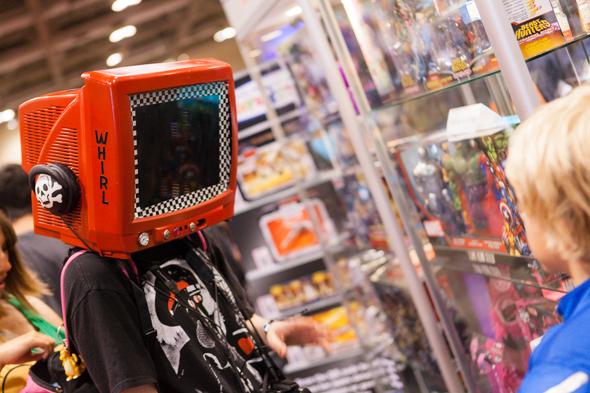 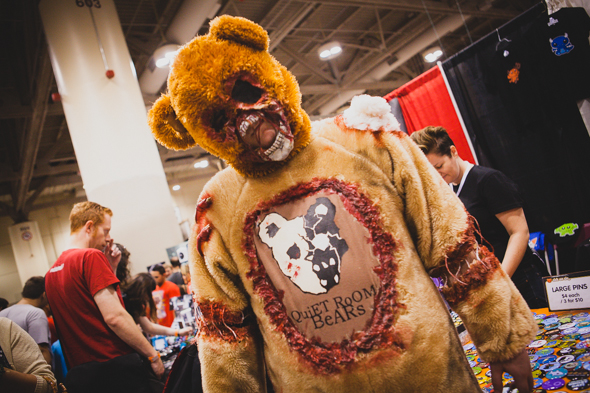 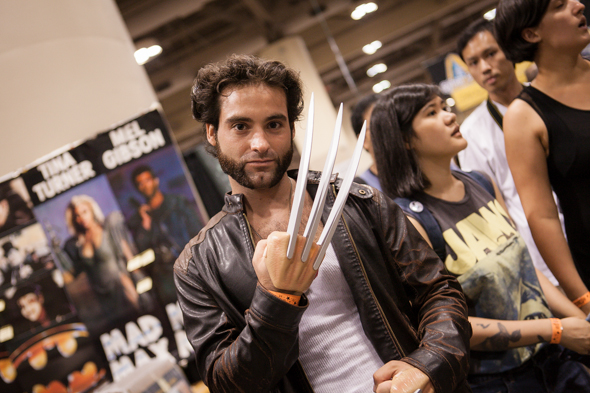