Before he became an unhinged mealy mouthed lunatic, Mel Gibson was Mad Max, a post-Apocalyptic crusader whose freewheeling antics in this full throttle trilogy of hard boiled Ozploitation action placed him atop the pyramid of revered 1980s superstars like Arnold Schwarzenegger, Sylvester Stallone, and Bruce Willis. Finally available together in one slick package, this collection is a must-own for fans of wild and frenetic film making.

Starting with Mad Max (1979), Gibson owned the screen as Max Rockatansky, chief badass of the Main Force Patrol. Leading his Turbo cops in a black Ford Falcon V-8 Pursuit Special with the super-charger on the hood, Max prowls the lawless highways in the Australian outback fending off the anarchic motorcycle gangs who spell the collapse of civilization. The Road Warrior (1982) finds Max drifting after a nuclear war, stockpiling gasoline and helping a desolate group fend off even more crazed gangs in the most fondly recalled installment, while the trilogy concludes with the underrated Mad Max Beyond Thunderdome (1985), sadly best remembered for its cheese ball Tina Turner ballad.

Extras include a frank discussion with George Miller (who has since gone to direct the likes of Happy Feet), original trailers, and a neat short film looking at Mad Max: The Film Phenomenon; however it's the high octane, adrenaline fuelled films, looking better than ever, that deserve your full attention.

It was only a matter of a time until the seemingly endless zombie boom produced a bone fide Zom Rom Com, but thankfully it isn't as dreadful as you might imagine. Essentially a re-telling of Romeo and Juliet (deep referencing, Zombie boy = R, Human girl = Julia) set in b-roll from The Walking Dead, this cheery Valentine's day gift for horror fans is more Shaun of the Dead than Dawn of the Dead. Berkshire native Nicholas Hoult as zombie with a heart R seals the deal, in lesser hands this would be a mess.

Coming after the delirious high watermarks of Breaking Bad's insanely great fourth season, there was sadly almost nowhere for season 5 to go except for down. The good news is that even sub-par Breaking Bad is just about better than the best episode of practically any other show, and still managed to deliver some of the most cinematic set-pieces in the show's so far amazing run (the train heist, yo). However, the crystallization of Walter White as pure evil was a bit Debbie Downer, and we can only speculate on where all of this is leading in the show's final run of episodes airing this summer. Un-missable, nonetheless.

Family friendly, charming 3D inverse alien invasion pic plays like diet Pixar, high on imagination but low on budget, with some nice animation and great vocal performances from Brendan Fraser, Rob Corddry and Jessica Alba. Cool extras include The Making of Escape From Planet Earth, "How to make an Animated Feature" with director Cal Brunker, and music featurettes with tween sensations like Delta Rae, Owl City and Cody Simpson.

Long before he lectured chairs, or chivvied punks with a .44 Magnum revolver, or chewed cigarillos in the surreal spaghetti West, legendary tough guy Clint Eastwood played Rowdy Yates on TV's Rawhide. Part of what is often classed the "Golden Age of Television", Rawhide chronicled a continuous cattle drive across the expansive West, allowing Eastwood to interact with guest stars who either joined the cattle drive, or attacked him. Featuring a memorable theme song and a breezy outlook, Rawhide is the kind of show that goes down best with Sunday afternoon warm beer and BBQ.

One of the great lost bananas cult films of the 1970s, Electra chronicles the life of short Motorcycle cop John Wintergreen (played with icy menace by Robert Blake) who finds that sometimes life deals incredibly bad hands, no matter how good your intentions may be. 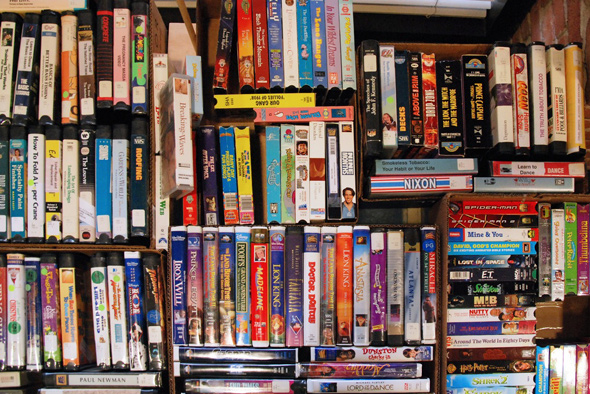 Weather you dig dusty old ex-rental VHS tapes, scratched up out-of-print DVDs, or rare-as-hens-teeth LP film soundtracks, thrift shops are your best bet for mainlining physical copies of old movies. If you're really lucky, you might even stumble upon a Laserdisc, or CEDs! Toronto thankfully is crawling in thrift shops, and these are some of the best for hunting down old movies:

While the key to thrifting is frequency - don't expect to find a pristine Betamax copy of The Legend of the 7 Golden Vampires on your first trip - these places can be quite traumatic and are therefore not recommended for the faint of heart. Everyone else, get digging!