If you've ever basked in the glory of cardboard armour, then you've probably met Skull Man (a.k.a. Greg Sommer) the loveable weirdo that brought Box Wars to Canada, and the split personality star of the documentary Skull World. Greg looks like the kind of guy you might cross the street to avoid, but I have to tell you that if you did so, you'd be missing out on meeting a larger than life character with a heart of gold.

Box Wars, the international underground movement of Cardboard-based combat (yes, cardboard), started in Australia and has since been championed in Canada by Skull Man and his Rockers. Participants build armour, helmets, and weapons out of cardboard and tape, often making giant elaborate costumes which are ceremoniously destroyed in Braveheart style combat. 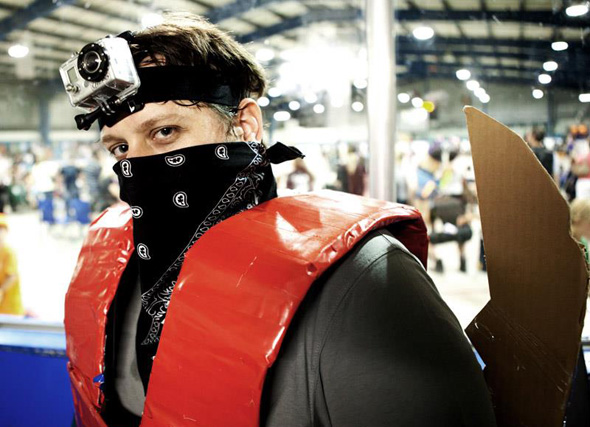 I participated in Box Wars myself in 2010, at a Toronto Roller Derby halftime show. I made a giant costume that resembled an iron, and called myself "Iron, Man", and I had only two massive cardboard fists to defend myself with. When I arrived, Skull Man immediately recognized me as a new face, introduced me to the other participants, and put me on his team for the big battle. That's the kind of guy Greg is. My costume held up better than I thought, but after a few minutes of combat I was really sweating. Box Wars is not only a tough sport, but it's a hilariously fun workout.

Skull World is not just a documentary about Box Wars, however â it offers a candid peek into the life of the quirky and inspiring man-child behind the mask. I had a chance to chat with local Justin McConnell, the director of Skull World, and ask him a few questions.

What made you want to follow Greg around for years, documenting his life?

Mostly, he's a very unique individual that I knew would be both endearing and entertaining on screen. Long before I started shooting the film I had inspiration to shoot something about him, as there's no one else out there like the man. I'm also a big fan of quirky character documentaries, and knew having access to someone like Greg gave me an opportunity others may not have. Once Box Wars started becoming a big thing in his life, there was this whole new angle to take with his story, and I knew I'd better pick up the camera and get to work.

Was there ever a point where you thought, "what the hell am I doing"?

Definitely, through the entire process. As I was making the film I'd explain it to people and would get a lot of blank stares back. I knew this was one of those movies that on the surface may not make a lot of sense to people - a "why does this exist?" sort of thing. But I also realized that those questions would be answered the moment they actually saw the film. During the first Box War battle, before it started, I had a quick moment of "oh shit, I'm actually going to fight in one of these; I hope I don't get hurt", but that passed quickly. Pretty much the moment I hit someone. There were ups and downs along the way, but the film was a fun ride to go on while making, and any moment of doubt was quickly trumped with a unique experience I wouldn't be expecting.

Who should rush out a see this film, and why?

This is a movie made for those that like their films quirky, fast paced, and bizarre. I recommend it to everyone, but the ones that have an understanding of fringe cinema and counter-culture will probably take the most out of it. Basically, you're going to see things you haven't seen in a film before, and if you're hungry for something new and different, or think documentaries are too often the same old thing, then give this a try. At the very least, you'll get some good laughs.

Any plans to battle again?

Sure. I've battled four times so far, including the one we did during the World Premiere Q&A, and I'll do it again. It's a lot of fun... a nice release of tension.

Thanks for your time Justin!

After a successful festival circuit, Skull World enjoys a limited theatrical run starting this Friday May 10th until May 16th, two showings daily (3:50pm & 9:00pm) at the Carlton Cinema. As a bonus there will be special Q&A's w/ Justin & Skull Man at the Friday & Saturday 9pm screenings.

I'll see you in line, or on the cardboard battle field.