Taking a quick look around Toronto, it wouldn't be far fetched to assume that the film industry in this city is booming. Sure, international film crews love coming to Toronto to shoot the city as a cheap stand-in for the likes of New York, Chicago and Boston. Sadly though, the roster of Toronto-made films is smaller than one might expect. With low government funding, pricey film sets and studios and a resources, young entrepreneurs are plagued with a lack of accessibility to the tools required to create and fund their ambitious projects.

These road blocks are what make duos like Ally Pankiw (director and writer) and Matt Folliott (writer, comedian and comedy coach) all the more exciting. The pair have been keeping busy working on their film The B Side, a coming of age comedy, straight from the streets of Toronto. The pair submitted their project to the Cinecoup Film Accelerator competition which aims to help young filmmakers develop, market and finance their feature films.

Teams apply with a two-minute trailer and then advance through a series of weekly tasks, relying on public voting to choose who continues on in the competition. The top 10 will be optioned for development and packaged for meetings with international buyers and sales agents at the Cannes International Film Festival (Yes, that Cannes). The Final 5 then travel to the Banff World Media Festival to pitch to an industry panel at an official festival event on June 10, 2013. One project will be selected for up to $1 million in financing and guaranteed release in Cineplex theatres in 2014. So far, The B Side team has made it into the Top 40 across Canada, and the final 15 will be announced this coming Monday April 29th.

I caught up with the raucous duo over Gmail chat to talk business, crack jokes and find out why competitions like Cinecoup are so important to the Canadian film industry. The pair will be hosting a shin-dig at Comedy Bar on Bloor Street tomorrow night to support The B Side, featuring stand-up and improv sets from Toronto-based comedians and a performance by local band, Army Girls. 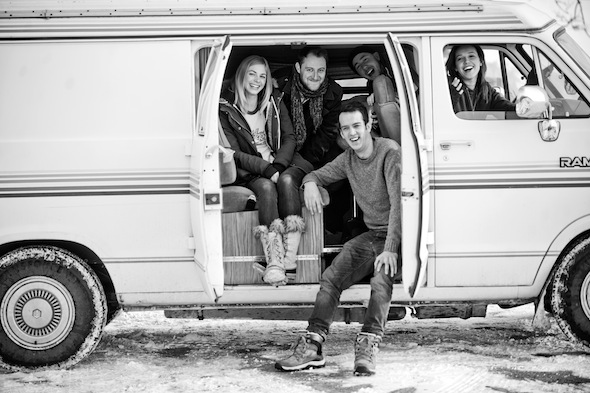 Why don't you tell us a little bit about yourselves? How did each of you find your way into the film and comedy scenes, and how did the two of you meet?

Ally: I'm Ally Pankiw and I'm a writer and director here in Toronto. I got my start in broadcast news and then worked in reality television for a while. About a year and a half ago, I decided it was unlikely that I'd get to work on my dream project by just waiting around, so I started to make my own opportunities in film. My first short is entering the festival circuit right now and I'm also developing a feature length documentary (about mental illness the professional comedy community).

Matt: Well, I'm Matt Folliott and I'm the best comedian that's ever existed. You just don't know it yet. Ally and I met through a mutual friend about five years ago. We really like our writing relationship because we both bring different things to the table. I've been doing comedy in Toronto for six years. I've travelled all over North America performing comedy in festivals like Edmonton's Improvaganza, Austin's The Out of Bounds Festival, and the Vancouver International Improv Festival. I also teach improv at Second City and the Impatient Theatre Company, and if you've seen me at a show it's probably been at Toronto's Comedy Bar.

Ally: Matt also voices a lot of Mr. Clean commercials. They've startled me out of many a make-out session.

Matt: Story of my life.

How did the rest of the team that you work with on the B Side form?

Ally: I work for a interactive media production company called The Young Astronauts and we operate as a collective when it comes to video and film projects. So, as soon as Matt and I decided we wanted submit to Cinecoup, we had a lot of help from the whole team. I asked the producer of my short film, Kyle Bodanis, to come on as producer of The B Side. One of our actors, Alex Tindal, also helped us write the script.

Matt: Alex Tindal is ACTUALLY the best comedian in the world.

So tell me a little bit about the movie. What is The B Side all about?

Ally: The B Side is a character-driven indie comedy about a group of friends taking a road trip across Canada to get to a huge music festival to stop our main character's girlfriend from leaving him for a cool guitar player in her band. It's a pretty noble cause. It features really weird, well-developed characters, but it doesn't leave the realm of reality. We still make sure to put our characters in situations that will challenge them and allow their points of view to be explored.

Ally: Annnnd, we also want to incorporate real bands and musicians into our script. We already have a few cameos set up by notable Canadian musicians and hope to keep adding more.

Matt: We can't tell you who they are, but you'll like them. 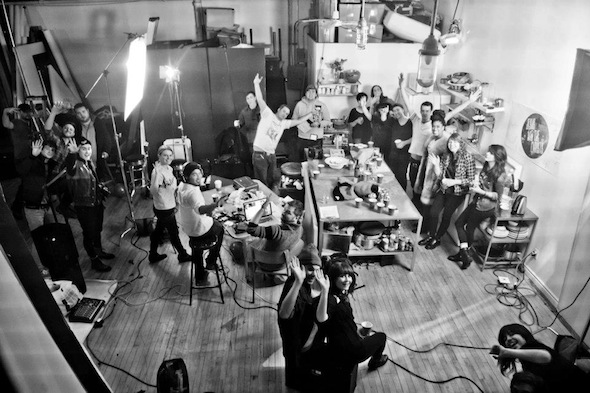 I've heard you mention that including the comedy community in the production of the film was important. What was the casting process like?

Matt: Well, you have just an untapped well of comedic talent in Canada, and specifically Toronto, that only gets used in commercial work.

Ally: A little bitter about that, Matt?

Matt: Some days I just want to give up and work at Leon's.

Ally: But yeah, Canadian comedy is amazing and we lose so many talented comics to the States every year because of all the work down there. We want to keep our hilarious comedians working in film and television roles here as long as we can.

Matt: We have a really rich comedy history in Canada.

Ally: And we want to showcase it. We knew immediately who would best portray the characters we created. It was more asking comedians to be involved, rather than doing a full casting call.

Matt: Separately, we are Ally and Matt. Together we are the Judd Apatow of Toronto.

So from start to finish, The B Side is really a collaborative community project.What has the reception been like so far in the comedy circuit?

Matt: I think the reception has been super positive. Most comedians know that they need to get behind these types of projects and move towards making our own opportunities in this country.

Ally: A huge supporter of ours has been Gary Rideout Jr., who is the owner of Comedy Bar and a comedian himself. He really understands the need to create your own work.

What made you decide to enter the Cinecoup competition? Aside from the $1 million pay day, of course.

Ally: Well, Cinecoup was appealing in that it was unlike anything I'd ever heard of before. I'm all for trying new ways of getting my work out to people and gaining exposure for what we're doing and this competition is really good at that - the traffic they're generating for all of the filmmakers is well worth the weekly challenges we have to submit.

Matt: And, a lot of the time, even if you get your film made in Canada, it's hard to get distribution.

Ally: Soooo.... a guaranteed release in Cineplex theatres really motivated me. I think Canada needs more disruptive models like Cinecoup because Canadians are talented and the more avenues we can find to fund our talent, the better.

What happens to The B Side, if the film doesn't make it to the finals? Is this a project that the two of you will continue to work on?

Ally: Absolutely. We really love the characters we've created and we want to see them come to life in some form. Even if we're not the final project that gets made, the Top 10 projects are being shopped at Cannes and the Top 5 get to present at The Banff World Media Festival in June, so hopefully that could lead to something great. (Disclaimer: we don't even know if we're in the Top 15 yet!)

Matt: Vote for us!

Have you had a chance to look at some of the competition coming out of Toronto?

Matt: Because we feel threatened.

What can we expect to see from you in the future? Will you continue to work together on future projects?

Ally: Well, don't worry just yet. We'll keep harassing you on social media, asking you to vote for The B Side or any other number of projects we have going on. We'll definitely keep writing together. I can't get enough of this guy.

Aw, that's a precious moment right there. So, what is tomorrow night's event all about?

Ally: Tomorrow we are having a live show at Comedy Bar to promote our project and raise awareness for our noble comedy cause.

Ally: And the voice of Magic Erasers nation-wide, Matt Folliott! Army Girls is also going to be blessing our ears with beautiful music and we'll be showing our concept trailer.

Matt: We might even be giving away some prizes. Who wants to win a date with Folliott?

Ally: So, come have a beer with us and laugh your cares away. 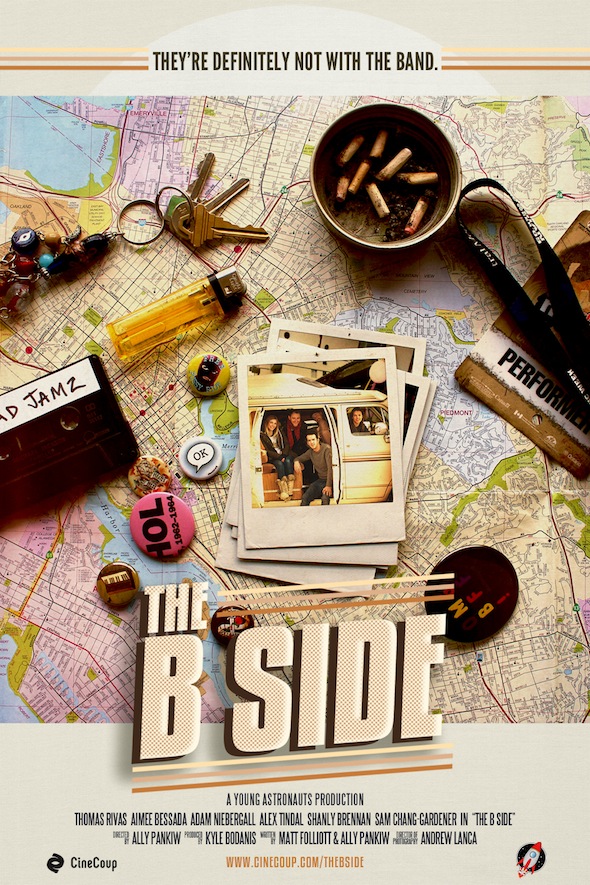 All photos by William Pelletier